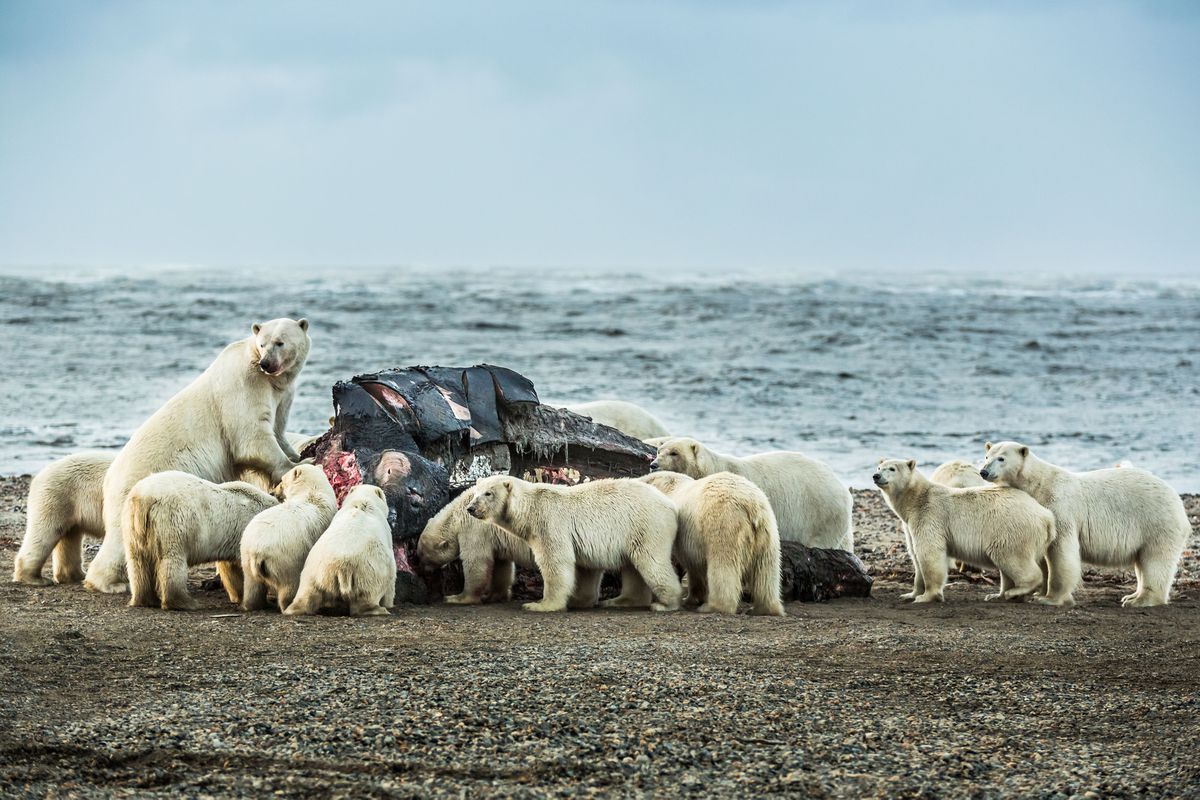 Polar bears congregate around a bowhead whale carcass on the beach in Kaktovik on Sept. 7, 2012. (Loren Holmes / ADN)

Polar bears congregate around a bowhead whale carcass on the beach in Kaktovik on Sept. 7, 2012. (Loren Holmes / ADN)

Polar bear guides in the northeast Alaska village of Kaktovik are upset by a last-minute order from the Trump administration that appears to halt polar bear viewing in the Arctic National Wildlife Refuge until studies on its effects are completed.

The guides are worried they’ll undergo a second straight year of lost income, after the COVID-19 pandemic last year prevented most tourism across Alaska. However, the practical implications of the order are uncertain because President Joe Biden’s administration could undo the order.

The three-page order, signed Jan. 15 by former Interior Secretary David Bernhardt, raises concerns presented by some village residents at past meetings about increased tourism, such as the heightened risk of bear and human conflicts and competition for seating on the small planes flying in and out of the community.

In recent decades, the village of about 200 people has seen rising numbers of polar bears, many drawn to the area by an Arctic Ocean beach where whaling crews discard bowhead whale carcasses. Tourist numbers have risen too, to more more than 1,000 in recent years from a few dozen around a decade ago.

The tourists are shuttled by the guides in small boats to the barrier islands near the village or to the bone pile in vehicles. The season runs from August to October.

The secretarial order says the Alaska Native corporation, the tribe and local residents in the village have raised concerns that they can’t successfully compete for the permits.

Robert Thompson, president of the Kaktovik Polar Bear Captains Association and a guide himself, says the order implies that guides from cities outside the village are taking away opportunities from local residents.

That’s not true, he said: The boat touring operations, overseen by the U.S. Fish and Wildlife Service, the refuge manager, are all fully or partially owned by local residents, according to Thompson.

“The (former) secretary of the Interior is making decisions on false information,” Thompson said.

Before polar bear viewing is authorized again, the order calls for a report by mid-July on matters like the impact of the polar bear guiding industry on the village and the bears.

The order could be replaced by the Biden administration, although it remains in effect for now. Congress only earlier this month confirmed Deb Haaland as Interior secretary.

Kaktovik Mayor Amanda Kaleak said the tourism has provided work for villagers and extra income for local artists. But some villagers, among other concerns, have had their privacy invaded by photo-snapping visitors.

The tourists also compete for limited seats on small airplanes flying into and out of village, she said.

“They need to have a study on how this affects the people in the village,” Kaleak said.

Matthew Rexford, president of the village Native corporation, said some residents have been concerned that the village doesn’t enjoy much of the benefits from the tourism.

A bed tax brings in some money to the city, he said. But some visitors are now arriving for day trips, limiting the income to the city.

“We’re seeing a lot of negative impacts from polar bear tourism,” he said. “We need to address those and mitigate those.”

Thompson said the guides have taken steps to help alleviate concerns. In one change, they’re bringing in guests by charter plane to make sure seating on scheduled flights is available, he said.

The captains support new captains and guides coming from the community, he said.

“We all agree to do what we can to help new people getting in,” he said. “None of us want to see outside interests take over.”

Fish and Wildlife has previously studied the impacts of the viewing program in the village, according to the agency’s 2019 summary of the program.

The agency has worked to address concerns raised by some village residents, according to the summary. It has called for guidelines that include Coast Guard certification for captains, new educational requirements for guides and an internet-based reservation system to spread out arriving visitors.

A spokesman with the Interior Department, in an email, declined to respond to questions about the order.

Kaktovik has implemented a pandemic-related mandate restricting visitors from traveling to the village.

“When the city of Kaktovik lifts this mandate prohibiting non-resident visitation, the refuge will do its best to quickly evaluate the situation in conjunction with the community to ensure they can conduct a safe and viable viewing season and issue guiding permits as soon as possible thereafter,” the Interior spokesman’s email said.