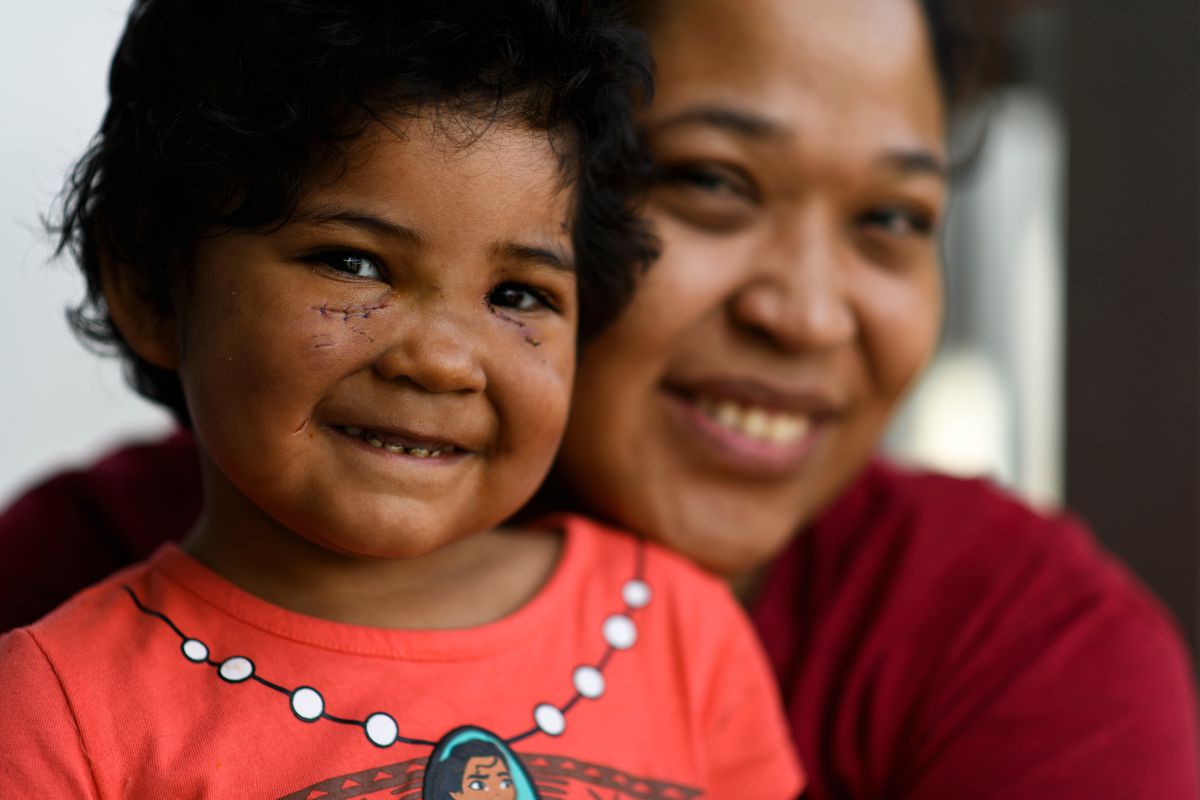 Amaya Santillana, 3, is in Anchorage this week for medical treatment after she was attacked by a dog outside her home in Chevak on April 18. She's here with her mother LaVerna Paniyak, right. (Marc Lester / ADN)

Amaya Santillana, 3, is in Anchorage this week for medical treatment after she was attacked by a dog outside her home in Chevak on April 18. She's here with her mother LaVerna Paniyak, right. (Marc Lester / ADN)

A 3-year-old Chevak girl was badly hurt last week when loose dogs attacked her as she played outside her home.

Since the Sunday attack, Amaya Santillana has traveled to Bethel and Anchorage for treatment and undergone two surgeries, said her mother, LaVerna Paniyak.

Charges had not been filed against the neighbor who she said owns the dogs, although the investigation is open and Alaska State Troopers are seeking witnesses, said Austin McDaniel, a spokesman for the troopers.

It’s unclear what will happen to the dogs. Troopers have no authority over local animal control issues and cannot interfere in decisions about the dogs, McDaniel said.

KYUK Public Media in Bethel reported Chevak city ordinance dictates that animals that bite a person undergo a quarantine check for rabies before they are euthanized. An email message to the city from the Daily News was not returned, and officials could not be reached by phone for this story.

‘Three dogs on top of her’

On Sunday afternoon, Amaya bounded out of the house, excited to play in the yard with her 10-year-old brother, said her teenage cousin Aaliyah Paniyak-Hill. As Paniyak-Hill was preparing to join them outside, she looked out the window.

LaVerna Paniyak said she was in her bedroom caring for her 2-month-old daughter when she heard her niece scream. She ran to the window and saw her neighbor leading the three pit bulls away from her yard by snowmachine, she said.

On the ground, Amaya was bleeding heavily from multiple wounds on her face and head.

The moments that followed included an eruption of emotions. Paniyak said she and her niece called for help — reaching out to local health aides and trying to contact village police, who Paniyak said hung up the phone on her. Paniyak called the Alaska State Troopers and requested help.

The 15 minutes the family spent waiting for health aides to arrive were terrifying, Paniyak said. She feared her daughter would die because she was losing so much blood.

“I grabbed my daughter and I was holding her and she was telling me, ‘Mommy, I’m cold. Mommy, I’m getting tired, I want to go to sleep,’ ” Paniyak said.

Both she and her niece cared for the girl, trying to keep her awake and talking.

Tensions between Paniyak and her neighbor had escalated recently, Paniyak said. She said his dogs have previously acted aggressively toward her children and he has made violent threats toward her and her family.

Paniyak said she’s certain the neighbor owns the dogs that attacked her daughter and has seen them with him countless times, but the neighbor told KYUK that the dogs weren’t his. The neighbor hung up when a Daily News reporter reached him by phone Thursday.

While she waited for health aides to arrive, Paniyak said, the neighbor returned home. She said she angrily confronted him but that he threatened her family and eventually grabbed a pistol and fired four shots into the air toward her home.

Paniyak said she took Amaya to the health center, where it was decided she needed to go to Bethel for treatment. For reasons unclear to Paniyak, Amaya did not get a medical evacuation but instead was flown on a commercial plane to Bethel, where she underwent her first surgery Sunday night.

In Bethel, doctors decided she should be treated in Anchorage. Mother and child boarded a commercial flight Monday. In Anchorage, Amaya underwent a second surgery and spent the night in the hospital.

Amaya was able to leave the hospital Tuesday, but medical appointments and checkups have continued, Paniyak said. Her mother flew to Anchorage with Paniyak’s three other children early in the week.

“No, no, you can’t touch those,” Paniyak reminded Amaya as she moved her daughter’s hands away from the wounds.

It’s been hard seeing her daughter go through so much pain, but Paniyak said Amaya is recovering well.

Paniyak said she’s upset about how the village police have handled the case. She said she worries the dogs could harm others if they’re not put down.

Paniyak was a Chevak village police officer for about seven years before leaving in 2019, she said. She served as chief for several months.

But by the time the officer arrived, Amaya and Paniyak were already at the health clinic. When he arrived at the clinic, Paniyak said, she told him what happened and showed him photos, but she said she has not heard from the police department since.

Messages left with the department seeking comment for this story have not been returned.

Paniyak said rumors about the dogs’ whereabouts were spreading through Chevak and it wasn’t clear if they’d been put down. She said she has not heard from the city about any official actions.

Troopers are continuing to investigate and Paniyak said she hopes other witnesses will talk with authorities about the situation. She said several people were outside her neighbor’s home during the attack.

“If this was your kid, I’m pretty sure you’d do the right thing,” she said.