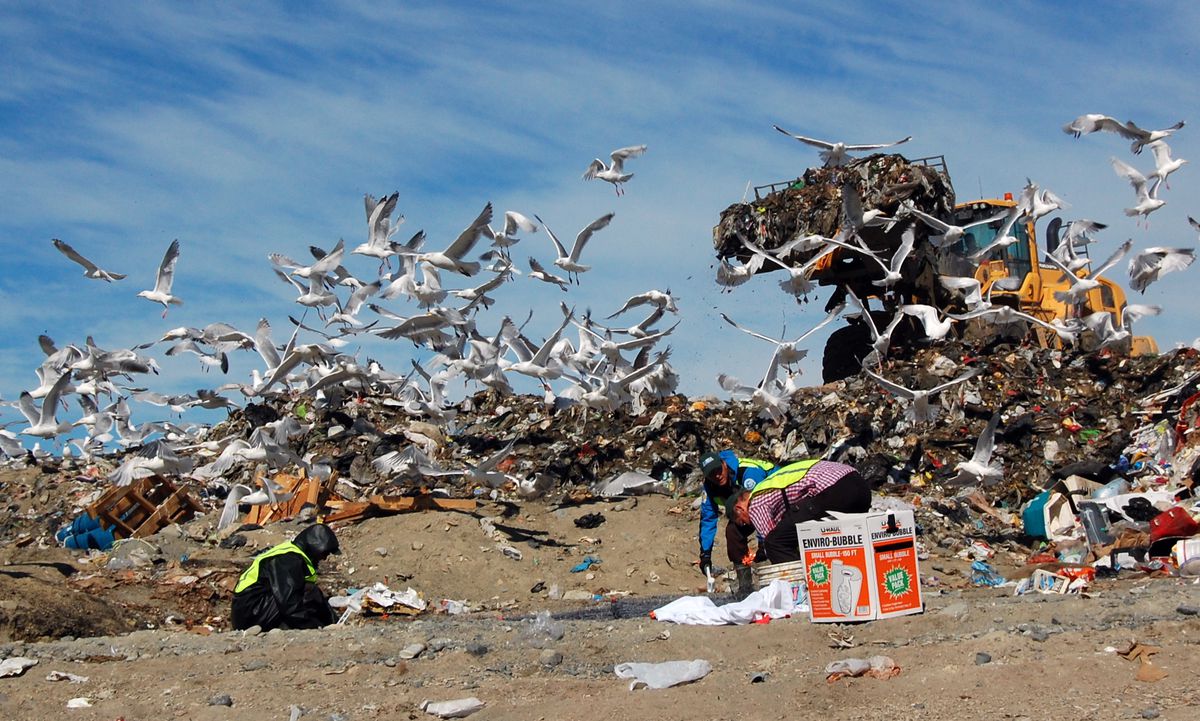 Seagulls flocking to a garbage dump and to an often-crowded fishing site on the Kenai Peninsula are carrying away something more ominous than food scraps, new research has found.

The gulls are acquiring E. coli bacteria that are resistant to antibiotics, a troubling sign that human waste put into the environment is starting to reverse health advances brought by medicines that have successfully battled infectious diseases since the early 20th century.

A study by researchers from the U.S. Geological Survey in Anchorage, Uppsala University in Sweden and other Swedish institutions found that gulls congregating in urban areas of the Kenai Peninsula were far more likely than their rural counterparts to be carrying strains of antibiotic-resistant Escherichia coli or E. coli bacteria.

The evidence was in the strains of E. coli found in the droppings the birds left behind. In the fecal samples taken in 2014 from gulls congregating at the Soldotna landfill and at the mouth of the Kenai River — both areas heavily used by humans, including those dipnetting for salmon — 55 percent of E. coli isolates were resistant to at least one antibiotic. Twenty-two percent of those isolates in the feces of urban gulls were resistant to three or more antibiotics.

In contrast, antibiotic resistance was found in only 8 percent of E. coli isolates in samples from gulls at Middleton Island, a Gulf of Alaska site with no human habitation.

"What it does look like is infections in gulls are reflective of human impacts," said Andy Ramey, a USGS wildlife geneticist who is a co-author of the Kenai Peninsula study.

Though E. coli is associated with many human illnesses, there is no sign that antibiotic-resistant strains in Kenai Peninsula gulls have affected people, Ramey said. E. coli is commonly found in the gut of animals, including humans, and most forms are benign, he said, though some forms can make people seriously ill. There are no signs that the gulls are getting sick from the strains they are carrying.

"There's no indication that the bacteria are making birds sick or killing birds," he said.

But the results do foreshadow what could be a bigger problem — antibiotic-resistant bacteria in the environment, including in the bodies of wildlife.

Antibiotics became crucial public-health tools after the 1928 discovery of penicillin. But widespread use — and, many scientists argue, overuse — has led many strains of disease-causing bacteria to mutate into forms that cannot be killed by existing antibiotics.

The Centers for Disease Control and Prevention estimates that in the United States alone, at least 2 million illnesses and 23,000 deaths are caused annually by drug-resistant bacteria, according to a national action plan on antibiotic resistance issued by the Obama administration in 2015.

"The loss of antibiotics that kill or inhibit the growth of bacteria means that we can no longer take for granted quick and reliable treatment of rare or common bacterial infections, including bacterial pneumonias, foodborne illnesses and healthcare-associated infections," said the national action plan.

Large gulls are good test subjects for determining whether humans are to blame for antibiotic resistance in the environment, Ramey said.

"Gulls occur at the same places where humans occur," he said.

The Kenai Peninsula study was the first examination of antibiotic-resistant bacteria in large-bodied gulls in Southcentral Alaska, the most populous part of the state, Ramey said. It follows earlier studies done by the Swedish researchers in more isolated areas.

One preceding study in particular, which sampled gulls in 2010 in Utqiagvik — then Barrow — was eye-opening and was the inspiration for the Kenai Peninsula study, Ramey said. It found that nearly half of the E. coli isolates in fecal samples taken from gulls there showed resistance to antibiotics. By 2010, Barrow had a new landfill, a site with a lot of human visitors, so an argument could be made that it is not really a remote area when it comes to spread of antibiotic resistance from humans to the environment.

Now the Kenai Peninsula findings are leading to wider research of antibiotic-resistant E. coli in gulls around Alaska. Samples were taken last summer in Anchorage, Barrow and Nome, and more detailed study was conducted on the Kenai Peninsula, work that included tracking gulls to see how they traveled between the landfill and the mouths of the Kenai and Kasilof Rivers and sampling of fish caught at those rivers.

Coming this summer will be testing in Bethel, on the Alaska Peninsula and in the Aleutians, Ramey said.

The ongoing work seeks to answer new questions raised by the recent findings, he said.

Is there a simple rural-urban distinction, or are there localized differences based on population, seasons, waste-management practices or other factors?

"Does it have to be a large community?" Ramey said. "Maybe if you have even a large population and good waste practices, it doesn't get into the gulls."