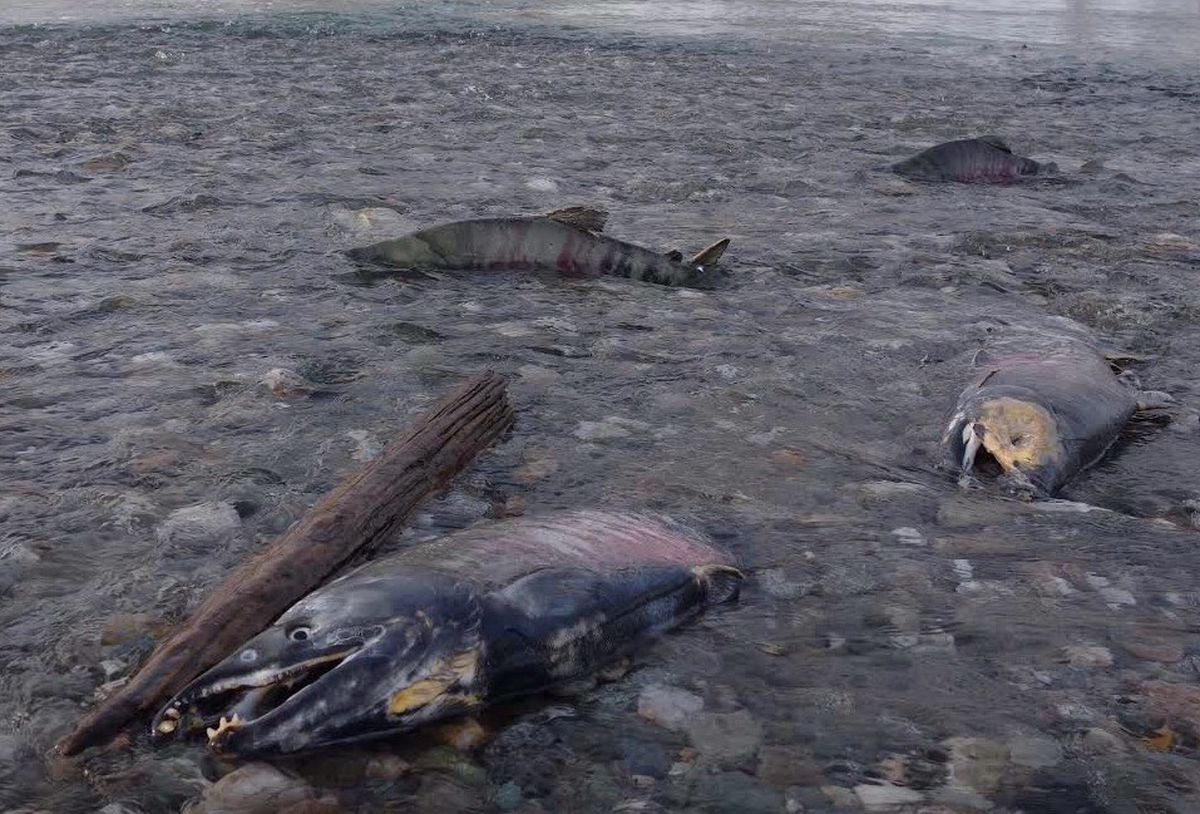 Chum salmon die after spawning while others swim on their way to spawn in the Delta River in November 2017. The Delta River meets the Tanana River, where the fish go to spawn, about 10 miles north of the town of Delta Junction. (Ned Rozell)

Chum salmon die after spawning while others swim on their way to spawn in the Delta River in November 2017. The Delta River meets the Tanana River, where the fish go to spawn, about 10 miles north of the town of Delta Junction. (Ned Rozell)

MOUTH OF THE DELTA RIVER — On a morning with biting air in the single digits Fahrenheit, this river smells like sulfur and is splashy and loud. Bald eagles and ravens swoop in the updraft of a nearby rock bluff in what looks like play.

In early November, a time when shadows lengthen and deep cold hardens the landscape, chum salmon have returned to spawn in the lower Delta River. In spots, the water is so shallow that dorsal fins wiggle in the frigid air. Some fish get frostbite on really cold days.

Now is the peak of one of Alaska's last great animal migrations of the year. Thousands of "fall run" chum salmon are hanging a right from the Tanana River into a few crystal channels of the Delta River.

These fish are at the end of their four-year lives. The tiger-striped dog salmon began a 1,100-mile journey from the Bering Sea from mid-July through early September.

The Yukon River run of chum salmon is the largest in the world. Most years, three times as many fish than there are people in Alaska migrate up the Yukon. This year is an exceptional run, with 5 million chums jetting up the river, including 2.3 million fall chums returning to the Delta River and elsewhere.

These arm-length fish, larger than summer-run chums that returned in the warmth of solstice, are stacked at a deep aqua crescent where the Delta shoves into the Tanana River, right next to the Richardson Highway bridge.

Out of the pile, chums blast forward into the clean water of the Delta, just inches deep in spots. Males have wolfish jaws with overlong snouts. Females full of eggs sport the same pink and black stripes on torpedo bodies. None of the fish have eaten in more than a month, since they left salt water to nose back to their birth stream.

Unlike in summer, the Delta's water is now transparent. Until mid-October, it flowed deep and cloudy with glacial dust it carried in the meltwater from Alaska Range glaciers.

In this lowest mile of the river, close to the highway and nearby trans-Alaska pipeline, upwelling springwater keeps the river from freezing to the bottom. That is perhaps what first attracted the salmon to this spot, probably thousands of years ago: water that remains 4 degrees above freezing, allowing eggs to survive 1 foot beneath surface air that is 40 below.

Within these few watery acres of nesting habitat, female chums brush the river gravel with their tails, creating a depression called a redd. Into that, they spill more than 3,000 eggs. At the same time, male salmon deposit their milt. The female then fans her tail over the spot again, covering the fertilized eggs with gravel.

The males, spent after executing their life's mission, drift backward with the current. They are an easy target for eagle claws and the sharp beaks of ravens and magpies. Fox and coyote tracks meander over the snow-covered gravel bars.

Just like the male chums, the females are now done with a life that started three to six years ago. Then, as 1-inch fry, they traveled en masse downstream at spring breakup.

After laying eggs, a female chum hovers above its pile of gravel, defending the future generation. She fans there as long as she can, a few hours, until her energy wanes in the frigid water. Then the flow takes her too. Her body is a pack of nutrients, tumbling downriver.

Others will take her place. Chum salmon will return to the springwater of the lower Delta River for another month. Some day in early December, the last eggs will be secured in a pile of rocks. In April 2018, the eggs will hatch.

When the ice is thundering away in May, the new salmon will follow breakup toward the ocean. If lucky, the fish will make it 1,100 miles downstream, where they will mature into silvery ocean salmon. Those chums may swim as far as the Gulf of Alaska before somehow, in a few years, they feel the call to return.