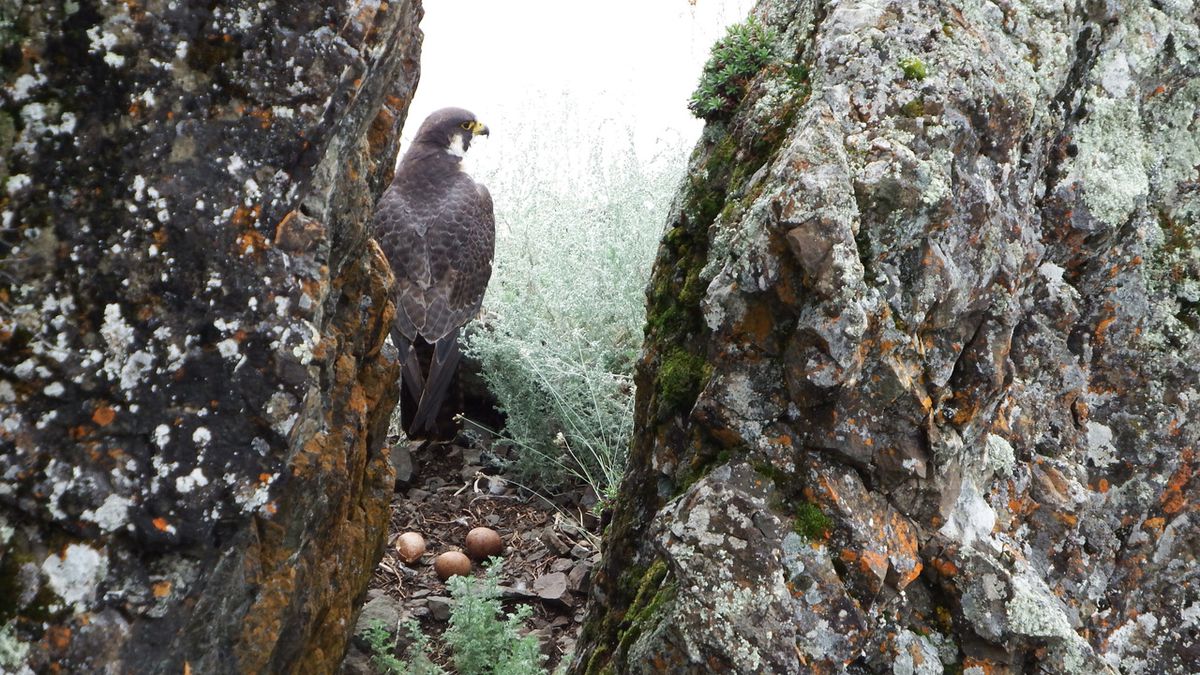 A peregrine falcon with eggs on a ledge on the upper Yukon River. (Photo by Skip Ambrose)

A peregrine falcon with eggs on a ledge on the upper Yukon River. (Photo by Skip Ambrose)

YUKON RIVER — "She's starting to wail," Chris Florian says, referring to the worrisome shriek of a peregrine falcon across the river.

Florian, her biologist husband Skip Ambrose and I are sitting on warm gravel a few steps from the river on a sunny summer evening. We just ate dinner, and Ambrose is repeating an action he has performed for the past 46 summers — squinting through a spotting scope aimed at a far-off rock ledge. He is trying to see white puffballs that are peregrine falcon chicks.

Now is not the time to see them. The evening sun is pleasantly baking us on the east side of the river, but 500-foot Tacoma Bluff, on the west side, is in the shade. Knowing they will see better in the morning light, Ambrose and Florian have tied their 24-foot Wooldridge motorboat to a spruce log for the evening.

After hearing rumors of them being just ahead of me for several days, I finally caught up with Ambrose and Florian on my canoe trip from Eagle to Circle. I have heard about Ambrose's work for years and am glad to see him in action.

Since 1973, Ambrose has made the same 180-mile trip up the Yukon River from the town of Circle to the Canada border, missing only two years. He has then reversed course, and motored and drifted on the current back to Circle. He does this to double-check the terrain; he starts traveling upriver because if he has boat problems, the Yukon will bring him back to Circle.

Ambrose, who with Florian now owns a home in Utah but is moving back to Alaska, takes this journey twice each summer: once in late May to early June, and another in July. The early trip is to see which cliffs have pairs of falcons, and also to see which ledges overlooking the river they are using for nesting.

This July trip is to count newborn chicks. I am lucky to catch Ambrose and Florian, who is also a biologist. They have just eight more nest sites to check for chicks. When they are done, they will head to Fairbanks and write up their observations.

They already know this: Peregrine falcons are nesting in 62 steep places on Alaska's upper Yukon this summer.

In 1973 peregrines nested in 12 places here, right after the Environmental Protection Agency banned the use of DDT, a compound introduced in 1947 to kill mosquitoes and other insects.

Years later, British scientist Derek Ratcliffe found a connection between the insecticide and birds. Falcons and others like the bald eagle that ate small birds and fish with DDT in their systems accumulated the compound in the fatty deposits of their own bodies. They laid eggs with thinner shells. Weaker shells broke, making nests less successful.

Alaska peregrines probably did not ingest much DDT from sources up here, where their prey species include spotted sandpipers, yellowlegs, gray jays and thrushes. But they and most of the birds they eat spend winters in the Lower 48 and Central and South America, all places where people sprayed a lot of DDT.

In the decades since the DDT ban in the U.S. and other countries (some people in Africa and South America still use it for malaria control), peregrine falcons — and several other species — have come back.

Ambrose thinks the population of peregrines stabilized by 2012, when the birds occupied 60 territories in the upper Yukon study area. The comeback took 40 years, and Ambrose has had a front-row seat for the show.

Though most scientists' research on the American peregrine falcon ended after the bird was removed from the endangered species list in 1999, Ambrose continued looking at upper Yukon birds.

The U.S. Fish and Wildlife Service funded his observations from the late 1970s until the birds were de-listed, then the U.S. Air Force gave money to support Ambrose's work for a few years. The National Park Service hired Ambrose to monitor the birds until eight years ago, when he continued at his own expense.

Over the years, Ambrose has completed the surveys from canoes, rafts and agency motorboats. A few years ago, he and Florian purchased the 24-foot Wooldridge riverboat with an enclosed cabin that allows comfortable eating and sleeping in the wilderness of Yukon-Charley Rivers National Preserve. The 2.5-million-acre sanctuary covers most of the study site.

"We bought the boat because we just like doing this work and we think it's important," Ambrose says.

In a scientific world of two-year degrees and need-driven government studies lasting a few years, observations like Ambrose's or George Divoky's 44-year study of black guillemots north of Utqiagvik are rare. Ambrose and Florian think the real stories might just be unfolding.

"No one's ever put intense observation into a recovered population," Ambrose says. "The more you know, the more you realize how little you know."

As an example, they have been seeing female peregrines fighting one another for nesting sites, behavior Ambrose described in a 2016 paper.

"Over the last 3 years, we observed injured adults at 5 locations, something we never observed in previous years," he wrote. "All the injuries were leg or foot related, and we suspect these were the result of interactions with other peregrines."

As the average distance between peregrine nests decreased over the years, the number of nestlings per occupied territory also went down.

Now 72, Ambrose wants to continue his study until it spans at least 50 years. Basking in the sunshine in this open wilderness expanse of Alaska, there seems no reason to stop.

"Every year we find a sidelight we never expected," Ambrose says.