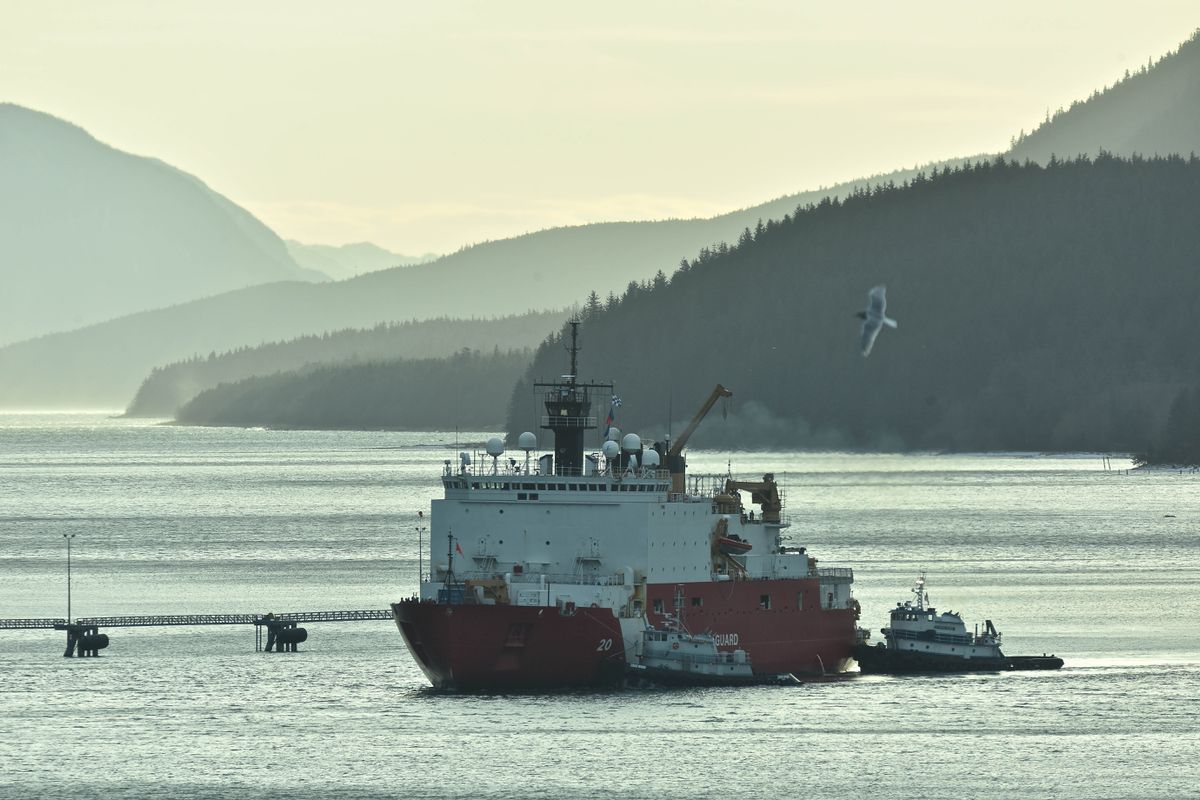 The Coast Guard Cutter Healy and crew make way towards the Alaska Steamship Dock in Juneau, Alaska, Nov. 14, 2017. The crew of the cutter Healy just concluded a five-month deployment in the Arctic and after their brief stop in Juneau, will continue enroute their homeport of Seattle. Coast Guard photo by Petty Officer 1st Class Jon-Paul Rios.

The Coast Guard Cutter Healy and crew make way towards the Alaska Steamship Dock in Juneau, Alaska, Nov. 14, 2017. The crew of the cutter Healy just concluded a five-month deployment in the Arctic and after their brief stop in Juneau, will continue enroute their homeport of Seattle. Coast Guard photo by Petty Officer 1st Class Jon-Paul Rios.

ABOARD THE USCGC HEALY — On a ship near the top of the planet, a 120-pound steel claw dumps out mud freshly scooped from the bottom of the sea. Jackie Grebmeier gets to work with a pair of tweezers, picking shrimplike critters called amphipods out of the muck.

Grebmeier has been digging up animals in the waters between Alaska and Russia for more than 30 years. And she has noticed a trend: A retreat has begun here at the edge of the Arctic. With temperatures rising, creatures such as amphipods have been inching northward. Meanwhile, clams and fish and whales from balmier climes have begun to move in.

"We're starting to see changes that we've never seen in the decades we've been studying this area," says Grebmeier, a biological oceanographer at the University of Maryland Center for Environmental Science in Solomons (UMCES) .

As scientists debate whether ice-free Arctic waters might someday support more total life, they are beginning to puzzle out which species will be losers and which will be winners.

Life off Alaska shores, from plankton to polar bears, is tied to sea ice that covers these waters in winter. Spring melting triggers an explosion of microscopic plants that fall to the seafloor, to be eaten by bottom-dwellers.

But lately the ice in the north Bering Sea, the gateway to the Arctic from the Pacific Ocean, has been diminishing. One spot Grebmeier has been returning to for a long time had fewer days of ice in each of the past three years than at any time since measurements began in the 1970s.

This vanishing act can be felt by the humblest creatures near the bottom of the food chain, including amphipods and small clams, which have been migrating northward.

With their food on the move, clam-eating sea ducks have been falling in numbers. Gray whales usually at home in the Bering Sea have been spending more time in waters farther north — specifically, the Chukchi Sea, above Alaska.

Fin whales also have been showing up in the Chukchi. So have humpbacks and minke whales. None of these are traditional Arctic species, Grebmeier says. But they may be taking advantage of newly favorable conditions.

"Boom times" is how Sue Moore describes the situation for these whales. She's a biological oceanographer with the Fisheries Office at the National Oceanic and Atmospheric Administration.

Scientists at sea in August with Grebmeier, on the largest ship in the Coast Guard's fleet, have seen other signs of change.

The only American icebreaker built to serve science, the Healy can carry dozens of researchers. Grebmeier's companions studied such things as bacteria in the water that could be influencing cloud formation and dormant algae that might come to life if temperatures continue to rise, and walruses and poison shellfish.

While sifting through bottom-dwellers from the Chukchi, which the Healy visited after the Bering Sea, Laura Gemery, an ecologist with the United States Geological Survey, discovered some shells the size of grains of sand. They belong to species of ostracods, crustaceans with oversize heads, that aren't usually found so far north.

Her finding echoes a surprising observation made years ago in the Chukchi. Russian scientists came across what she calls "an incredibly large amount" of big Pacific clams, Pododesmus macrochisma, that typically live in warmer places south of Alaska and near Japan and California.

"The waters are getting warmer, and species that like those warmer waters are moving in," Gemery says. "It's that simple."

Temperature measurements made by the Healy suggest that historical barriers to entry are weakening in the Arctic.

Consider a cold spot in the north Bering Sea. Lee Cooper has spent years getting to know this pool, where temperatures are typically zero degrees Celsius, helping to keep out fish from the south.

This summer, it had a surprise in store. "It warmed up over zero degrees this year — for the first time ever, we believe," says Cooper, a biogeochemist at UMCES. At these temperatures, says Cooper, "fish have no reason not to migrate north."

Pollock, worth a billion dollars to American fishermen in exports to Japan and served up in grocery-store fish sticks and McDonald's Filet-O-Fish, are on the move. In 2010, walleye pollock and Pacific cod collected by NOAA trawl surveys made up just 2 percent of life in the north Bering Sea. In 2017, that number jumped to 37 percent.

A massive migration of fish has already taken place on the other side of the North Pole. Above Scandinavia, native Atlantic Ocean species including halibut and sculpin recently established a foothold in the Arctic, displacing smaller fish that had trouble competing.

"The observed trends in community area coverage can be characterized as a 'take-over,' " Norwegian and Russian researchers reported in a 2015 Nature Climate Change paper.

Fish in Alaska are critical for the indigenous peoples who fish to subsist and the fishermen who do so for profit. Alaska fisheries generate $12.8 billion in economic output annually.

How far creatures from the open oceans will be able to penetrate the Arctic remains to be seen. But with the region warming twice as fast as the planet as a whole, there's little reason to think that this trend will end.

"The way things are accelerating, these changes are going to keep marching up from the south," Grebmeier says. "I didn't think this would happen in my lifetime."