A big earthquake could send a tsunami up Cook Inlet. Would it reach Anchorage? 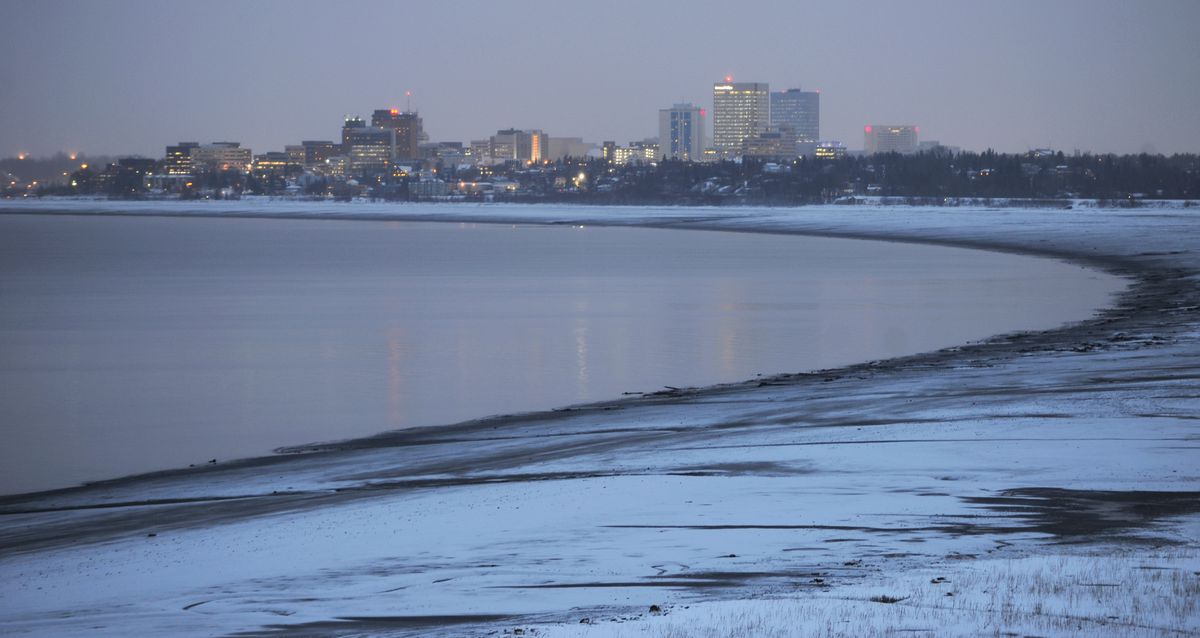 Four minutes after a 7.0 earthquake shattered morning routines in Southcentral Alaska on Nov. 30, residents got a smartphone alert warning of a tsunami risk and instructing them to seek higher ground.

The alert was canceled less than an hour later, but not before Anchorage residents called 911 to ask if they should seek higher ground. Officials later said it was meant more for coastal communities like Seward and Homer than Anchorage.

But the episode got a lot of people wondering: Could Anchorage actually be inundated by a tsunami?

Scientists, shy of speaking in absolutes, won’t say it is impossible. But it is extremely unlikely.

“We cannot say the probability is zero -- but it is a very small probability,” said David Hale, an oceanographer with the National Tsunami Warning Center, located in a building inland in Palmer.

Anchorage is largely safe from tsunamis because its location in Upper Cook Inlet, surrounded by the shallow, silty waters of Knik Arm and Turnagain Arm, insulates it from the impact of tsunami waves.

“The mudflats and the shallow water do not lend themselves to the transmission of tsunami energy,” said Hale.

If a major earthquake struck in lower Cook Inlet, it could trigger a tsunami that would travel up the Inlet, Hale said.

But once it got to the narrow point between the western shore of Cook Inlet and Nikiski on the Kenai Peninsula, the tsunami would be “damped out quite rapidly,” Hale said.

“The science doesn’t lend itself to an inundation in Anchorage,” he said.

A different kind of “local tsunami” caused by underwater slumping or a massive above-ground landslide that violently displaces water is a risk for Cook Inlet.

Steep, sloped mountains and silty river deltas could be a recipe for landslides, liquefaction and subsidence in a strong earthquake, according to the Tsunami Warning Center. Local tsunamis are hard to locate and monitor because they don’t start from the earthquake’s epicenter.

But again, Anchorage would be spared by the shallow water that surrounds it, Hale said.

“Bottom line, there’s just not that much water to move here,” he said.

[Full coverage of the Nov. 30 earthquake and aftermath]

The risk is considered so low that emergency managers and scientists haven’t even modeled scenarios or responses in the event of a tsunami in Anchorage.

Anchorage does not appear on the coastal tsunami maps produced by the Alaska Earthquake Center, which show inundation scenarios from Adak to Ketchikan.

Because of its low risk, the city has no infrastructure to warn people of tsunamis — unlike coastal towns such as Seward and Kodiak, which have evacuation route signs and warning sirens. Anchorage doesn’t have a tsunami evacuation plan or designated tsunami risk areas, said city communications director Kristin DeSmith.

On Nov. 30, the magnitude of the seismic event automatically triggered a tsunami warning covering all of Cook Inlet, said Hale. Anchorage was included because of the very remote possibility of a local tsunami, said Louise Fode, a warning coordination meteorologist with the National Weather Service.

“The November 30th event was an unusual situation where there was a genuine tsunami concern for Anchorage due to potential landslides. Anchorage is at minimal risk from a tsunami generated elsewhere that travels up Cook Inlet. However, a sizable earthquake in the local area has the potential to generate local underwater landslides or subsidence, which may cause a local tsunami along the Anchorage coastline. The National Tsunami Warning Center issued a warning for people along the coast until they could confirm there was no locally-generated tsunami,” Fode said. "Because of the low risk for tsunami, maps showing potential inundation in Anchorage have been a low priority and are not yet available. "

In the past, Anchorage has been erroneously included in tsunami warnings meant for Cook Inlet, according to Fode. It’s a problem, and the many government entities involved are working to refine the warnings, but it’s not a quick fix, she said.

In the minutes and hours after the earthquake, scientists checked local tide gauges placed throughout the Inlet to confirm that no local tsunamis had formed. Then, with no sign of water displacement, they canceled the warning, said Hale and Fode.

Still, the risk felt real and confusing for people in Anchorage staring at their smartphones and wondering if the gray icy waters off the Tony Knowles Coastal Trail or Kincaid Park would mount into a terrifying wave.

Fode and her colleagues evacuated their office on Sand Lake Road in West Anchorage after the tsunami warning.

“We hadn’t had a threat before. We knew we were close to the water, and close in terms of vertical elevation as well. We didn’t know what the line was," she said. "So we thought, OK, let’s not risk it.”