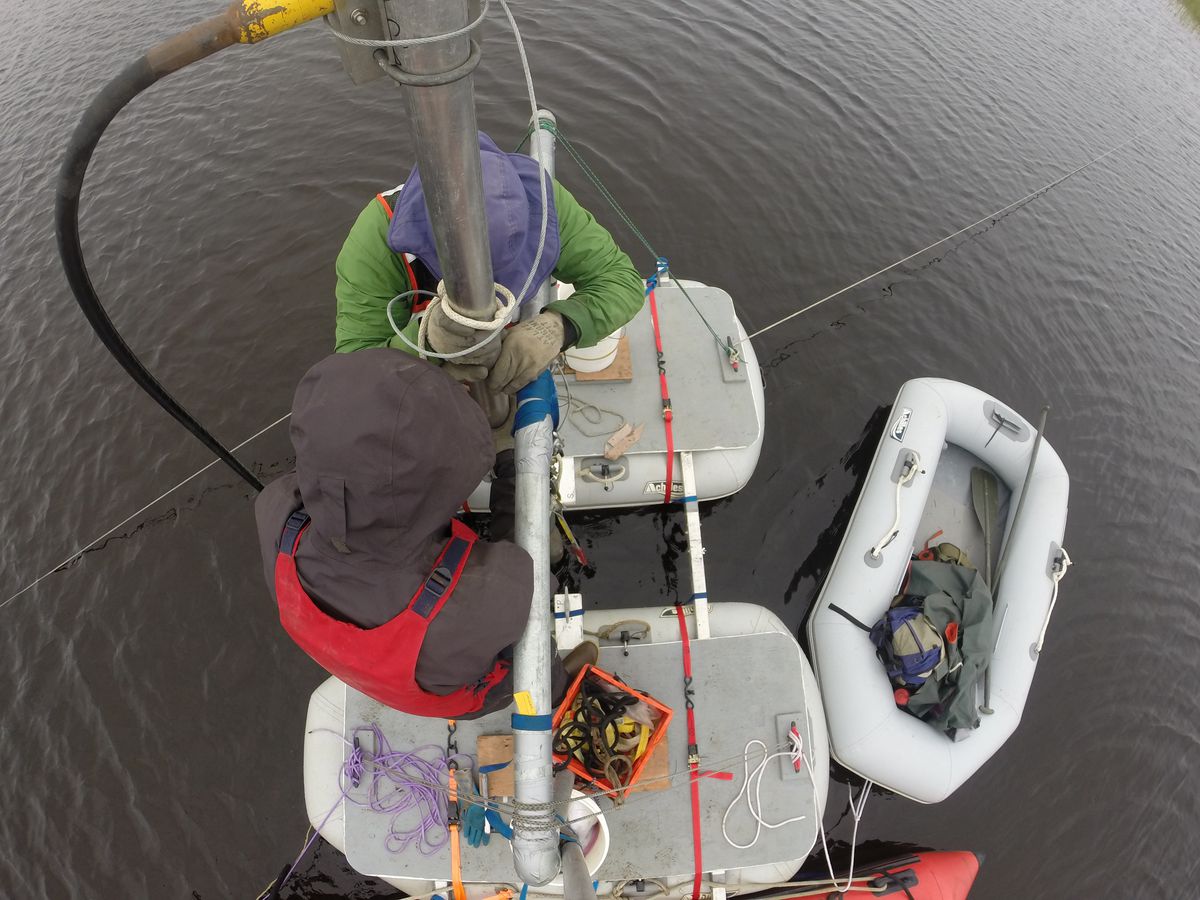 From above, Chris Maio (in green) and graduate student Reyce Bogardus pull a sediment core from a lake near Cape Espenberg. (Chris Maio)

From above, Chris Maio (in green) and graduate student Reyce Bogardus pull a sediment core from a lake near Cape Espenberg. (Chris Maio)

Cape Espenberg is an eyebrow of sand, driftwood, and low plants on the northeast corner of the Seward Peninsula. It is now quiet except for the swish of the wind through cottongrass and the songs of birds, but archaeologists have found a large village site there.

People lived on the cape for more than 4,000 years. Some of their descendants now live in the villages of Shishmaref and Deering. No one knows why the ancient people left.

Just a few feet above the Chukchi Sea, Cape Espenberg might have been hammered by storms that shoved water onto land. Or maybe an absence of storms meant driftwood was so rare people could not build homes. A researcher is using evidence from a nearby lake to see how often extreme storm surges have hit the area over the last few thousand years.

Chris Maio has floated a raft in a small lake at the end of a narrow trough cut through Cape Espenberg. The surge channel is a straight connection to the ocean, three-quarters of a mile long. It’s a pathway for salt water and beach sand, but only when driven by the strongest waves and fiercest winds.

Maio, a coastal geographer at UAF, along with Nancy Bigelow of UAF, is part of a project led by Claire Alix from Paris University, who also works with the Alaska Quaternary Center. Owen Mason from the University of Colorado is also part of the study.

For part of the research, in 2017, Maio and coworkers pulled plugs of muck from the bottom of the lake, penetrating as deep as 10 feet.

Back in the lab, Maio and a few student interns cut, split and dated the lake cores. They found the cylinders had zebra stripes of mud layered with coarser sand. Based on radiocarbon dating, the material from the bottom of the cores is 3,000 years old.

The scientists found that during the last century — in 1913, 1974 and 2011 — storms were large enough to carry sand three-quarters of a mile inland from the beach.

They were able to match the most recent sand layer with a “huge extratropical cyclone” with hurricane-force winds. That storm lorded over most of the Bering Sea and battered western Alaska in November 2011.

Maio wants to dig deeper into the sediment archived in the lake, to see if there might be clues as to what types of storms occurred in the past. Ancient Inupiat people there dug into the sand, using driftwood and whale bones to build complex homes.

“Are these changes we’re seeing in the last 100 years anomalous compared to the last 1,000 years or 3,000 years?” he said. “The farther the history book goes back, the better we’ll be able to assess the future.”