Oldest rock in Alaska has been found near Iditarod 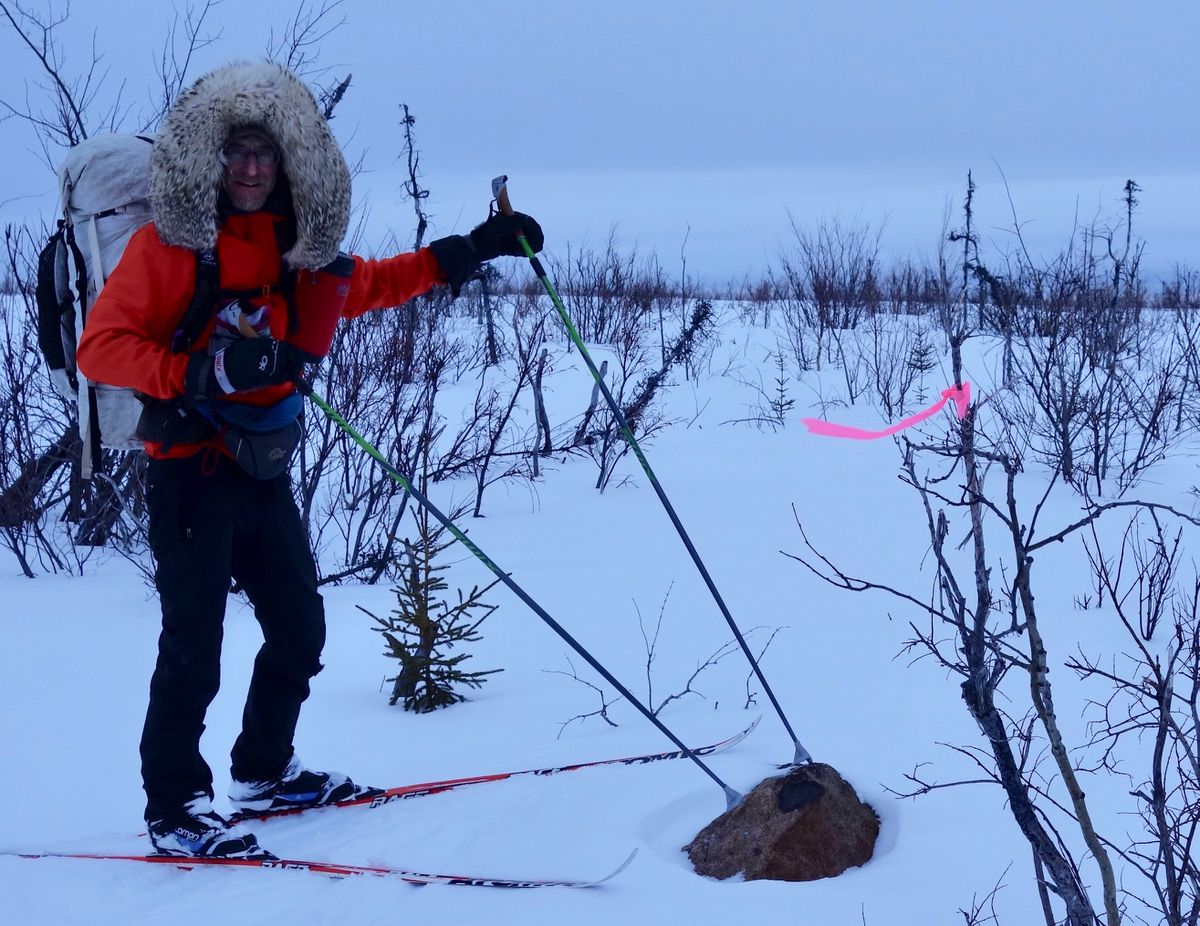 Bob Gillis inspects a rock protruding from near the Iditarod trail near its halfway point in southwest Alaska. (Photo by Ned Rozell)

Bob Gillis inspects a rock protruding from near the Iditarod trail near its halfway point in southwest Alaska. (Photo by Ned Rozell)

IDITAROD — While gliding along a trail that had just felt the imprint of 2,000 dog feet, Bob Gillis skied over to a rock that jutted from the snow.

A few miles northwest of the ghost town that gives the world’s most famous sleddog race its name, Gillis and I were in the neighborhood of the oldest rocks in Alaska. Could this be one of them?

A geologist with the Alaska Division of Geological and Geophysical Surveys, Gillis poked the rock with his ski poles.

“Looks like a volcanic rock to me,” he said.

Even though the rock had hardened to its present form tens of millions of years ago, its age was probably not even close to some unusual rocks discovered near Iditarod.

On a journey from McGrath to Shageluk following the path Iditarod racers had laid down, Gillis and I skied onward toward the next shelter cabin. Unknown to us, a few hours earlier we had slid over the oldest rocks in Alaska, which were coated with snow and a ribbon of packed trail.

A few decades ago, geologists Marti Miller and Tom Bundtzen found those primeval rocks by chance. In August 1983, Bundtzen, who then worked for the state and Miller, a research geologist with the U.S. Geological Survey, were starting a collaborative program mapping the rock formations of the Iditarod quadrangle in southwest Alaska.

Then, as now (as always), Iditarod was hard to reach. Miller and Bundtzen, who now owns a consulting company in Fairbanks, chartered a helicopter to get there. Flying over the wild country of spruce and swamp, they spotted a rocky knoll that looked like a good landing pad.

Soon after they touched down, both geologists noticed the rocks at their feet seemed out of place.

“We were so confused at these high-ranked metamorphic rocks in this part of Alaska,” Bundtzen said recently.

The rocks had been buried deep underground some time in their past; intense heat and pressure had transformed them from their original state. Earthquakes and plate movements over the millennia had shoved them to the surface.

The rocks resembled a type found around Fairbanks, but both geologists sensed they were different. They dropped a few samples in a collection bag.

When they returned — Miller to Anchorage and Bundtzen to Fairbanks — they sent a few samples to Don Turner, who then led UAF’s geochronology lab.

In that lab, now managed by Jeff Benowitz, researchers tell the age of rocks by chipping off a tiny crystal and heating it with a laser beam. The rock melts into a glass bead about the size of a sand grain. Argon gas wafts from the sample. Scientists direct this gas into a mass spectrometer, which tells them when a rock formed or when forces within the earth reheated it.

“I was very surprised to see how old those rocks were,” Bundtzen said.

In their explorations of the Iditarod area, Miller and Bundtzen mapped the same type of super-old rocks in a 25-mile curve of outcrops that poke from the boreal forest.

“They are, along with the Kilbuck Terrane (150 miles to the southwest), the oldest rocks in Alaska,” Bundtzen said.

Both rock clusters are islands of old rocks in a sea of much younger ones. Why?

The old rocks probably belonged to a craton — rocks that formed the core of a continent. The nearest one to Iditarod is the Canadian shield, home to Earth’s oldest rock (more than 4 billion years old) and found in Canada’s plains and Nunavut. The rocks might have broken away from Canada and lurched to Alaska on the movement of faults and Earth’s plates.

More likely, the geologists think, the rocks originated in Siberia, in an area with similar rock about 600 miles northeast of Magadan.

“They are sort of floating out there,” Bundtzen said of the Iditarod rocks. “It’s a peculiar problem. Where did they come from?”