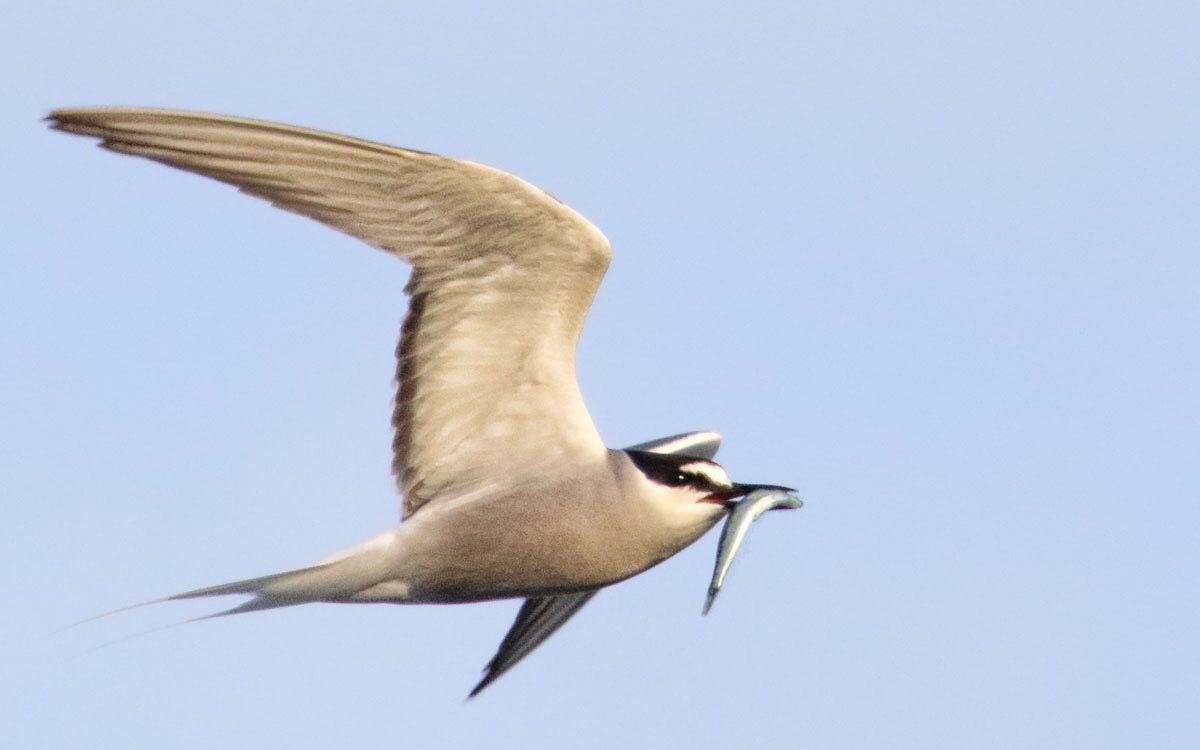 An Aleutian tern in Yakutat. (Photo by Nate Catterson)

An Aleutian tern in Yakutat. (Photo by Nate Catterson)

YAKUTAT — On sandy barrier islands between mountains and the sea, two different birds that look alike lay their eggs side by side. Biologists here are learning more about the less common, more mysterious one.

Arctic terns and Aleutian terns gather together on ocean spits to scratch out nest cups. Each is a graceful creature that distinguishes itself from a gull by the incessant slicing of its sharp wings through the air. Arctics, loud and quick to dart at any creature that walks near a nest, have pure black heads and pumpkin-orange beaks. Aleutians, more subdued, have white eyebrow patches and black beaks.

There are more than 1 million pairs of arctic terns worldwide, but many fewer Aleutian terns.

“There’s a small global population — about 30,000 birds breeding here and in Russia,” said Susan Oehlers, a Tongass National Forest biologist based in Yakutat. “They are probably declining, but we have very little information on them.”

Numbers of Aleutian terns at Alaska colonies have declined by 8% every year since 1960, biologist Heather Renner of the Alaska Maritime National Wildlife Refuge and other scientists wrote in a 2015 paper. In Alaska, Aleutian terns nest along sandy stretches of coast from Yakutat all the way up to the Bering Sea. Many more Aleutian terns breed along the coast in eastern Russia.

Researchers here in Yakutat, where residents just hosted a tern festival, are joining with others to unravel the mysteries of the Aleutian tern.

Oehlers and her colleagues have learned a lot about the birds in recent years. Using geolocator tags and satellite transmitters attached to breeding Aleutian terns, they have found where the birds go when they leave Alaska for the winter. Not long ago, no one knew.

Arctic terns fly almost the circumference of the Earth each year to spend summers in the far north and winters in Antarctica. Aleutian terns go almost as far another way.

In 2017, scientists in Yakutat and Dillingham fitted 15 Aleutian terns with backpack satellite transmitters. The birds migrated in fall from the sweep of the Aleutian Islands all the way to equatorial islands of Indonesia.

“It’s pretty much an Indonesia bird,” said biologist Sanjay Pyare of the University of Alaska Southeast.

Pyare traveled to Indonesia through the U.S. Fulbright Program in October 2018. For five months, he worked with local scientists and sought out the terns in wild, productive ocean environments, like the Riau and Metawai archipelagos off Sumatra, and in the Sunda Strait near Krakatoa, which is between Java and Sumatra.

Closer to Alaska, Renner with the Alaska Maritime National Wildlife Refuge traveled to Sakhalin Island in far-east Russia in 2018. There, she and U.S. and Russian colleagues checked out three colonies of breeding Aleutian terns. They saw fewer birds than Russian scientists had reported in earlier surveys.

Here in Yakutat, Aleutian tern numbers looked good in early June 2019, when Forest Service biologist Gwen Baluss surveyed them at a barrier island at the mouth of the Situk River. This summer, researchers in Yakutat and elsewhere will continue their detective work on a sleek bird that each year quietly traverses half the planet.