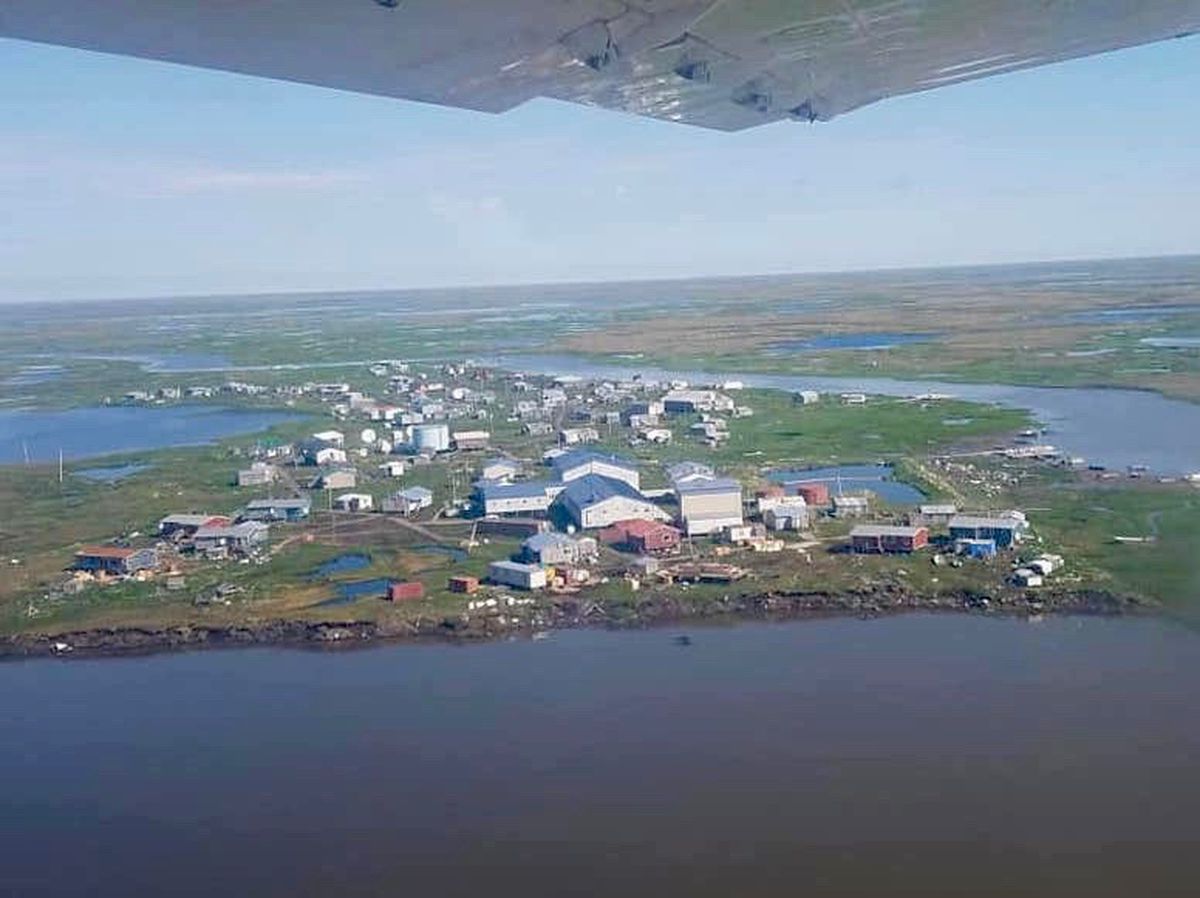 The relocation of an Alaska village is happening fast this summer, after many years of planning and work.

Observers say Newtok’s transition to Mertarvik is flying along because it has to — the Ninglick River bank is crumbling less than 10 yards from a Newtok home.

“There’s no more time,” said Aaron Cooke, an architect who helped design new houses for the project. “The water’s right by the houses.”

After voting to move their river-threatened village more than 20 years ago, residents of Newtok are in summer 2019 building 13 new houses on the volcanic rock of Nelson Island, 12 miles from Newtok. They also hope to finish a community center that might serve as a school this fall.

“Holy moly, this is the year it finally hit a sprint,” said Cooke, an architect for the Cold Climate Housing Research Center in Fairbanks. Cooke and his colleagues have designed energy-efficient homes for Mertarvik.

Workers at the new townsite are also building roads and a power station, as well as further developing the rock quarry and landfill. Those swinging hammers and steering heavy equipment include Newtok residents, U.S. Marines, people from the Alaska Native Tribal Health Consortium and workers for Native-owned contracting companies.

Relocations of Alaska villages — often prompted by floods or shifting river channels — have happened as long as people have lived here. The Newtok-to-Mertarvik move is different, because Newtok is a modern village with electric power distribution, frame houses and a landfill. Newtok people also voted to move, made a plan and are following it.

“If they hadn’t been planning all those years, it would have been a hot mess over there,” Cooke said. “Now that the water’s finally reached the first row of houses, they’ve got a plan.”

Since 1958, Newtok, home to about 350 people, has been one of about 200 Alaska villages on waterways off the state’s road system. That year, a barge carrying materials for a new school for Old Kealavik bottomed out in sand and mud on the Ninglick River. Workers unloaded the materials on a low-lying spot where the Kealavik River flowed into the Ninglick. Carpenters built the Newtok school there, and the village got its start.

Since then, more than nine football fields’ worth of land have dissolved into the river and sea, including the old dump site and barge landing.

This summer, construction noise is ringing over the tundra at the higher-elevation village site called Mertarvik, Yup’ik for “place to get water.” Residents hope the community center there will be functional for use as a school by this fall.

“You need that foothold,” Cooke said. “When Mertarvik is an official place, people will go there.”

Cooke has worked with Newtok residents since about 2008 when, as a master’s student, he designed the first version of the Mertarvik community center that may be completed this summer. The building has taken many years to become reality; villagers used funding along the way to do what they could. The piling foundation, for example, was completed in 2011 and has been waiting for money for a shell.

Starting a long time ago when villagers picked a new village site, funding sources have been many and varied, and workers have picked off projects over the years.

“One of the greatest things we’ve learned along the way is you don’t have to wait for a giant pot of money,” Cooke said.

Cooke and his team will visit Mertarvik five times between now and October, and he’s excited to see the progress of what he hopes will be a success story.

He said that in a decade or so, “we’ll have examples of communities that moved successfully and others that didn’t make it work. I think people are looking at Newtok very closely, to see the time it takes, the cost, and the obstacles to problem-solving.”