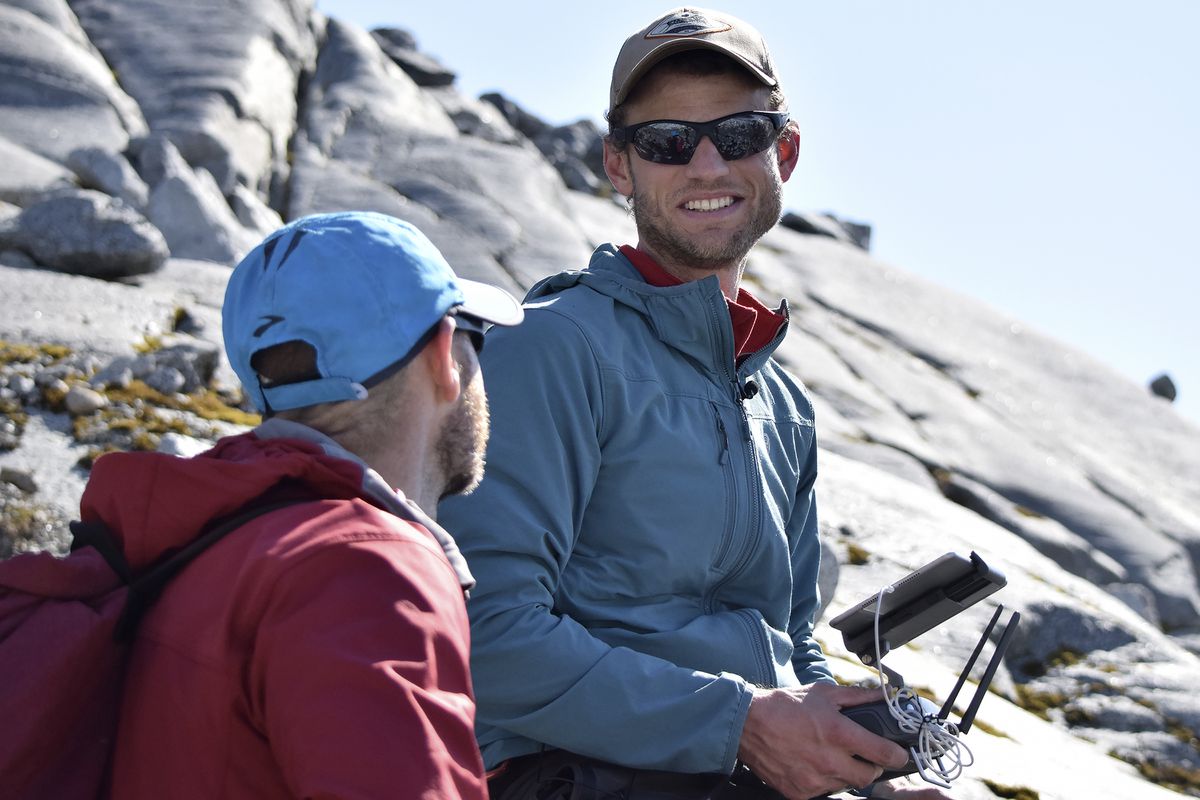 This June 21, 2019, photo shows University of Alaska Southeast environmental science professor Christian Kienholz, right, speaking with Gabriel Wolken, research assistant professor at the University of Alaska Fairbanks, while surveying Suicide Basin using a drone near Juneau, Alaska. A number of local scientists are studying changes to Suicide Basin, but Kienholz is one of the only ones using drones to analyze ice and water levels in the basin. (Nolin Ainsworth/The Juneau Empire via AP)

This June 21, 2019, photo shows University of Alaska Southeast environmental science professor Christian Kienholz, right, speaking with Gabriel Wolken, research assistant professor at the University of Alaska Fairbanks, while surveying Suicide Basin using a drone near Juneau, Alaska. A number of local scientists are studying changes to Suicide Basin, but Kienholz is one of the only ones using drones to analyze ice and water levels in the basin. (Nolin Ainsworth/The Juneau Empire via AP)

"There's some kind of pipe that it finds down there and then it just drains," said Kienholz, making a small circle with his thumb and pointer finger. "It might be a small pipe at the beginning, a small conduit, and because you have more and more water going out, it's this exponential increase of this pipe."

A number of local scientists are studying changes to Suicide Basin, but Kienholz is one of the only ones using drones to analyze ice and water levels in the basin. The use of drones for environmental monitoring has become so common in the professional arena that Kienholz started to teach the methods to students.

"The whole glacier is thinning, it changes year to year, so we're using drones to measure how fast the ice dam is thinning because that affects the volume of water that can be stored behind the ice dam," Kienholz said.

Suicide basin, near Juneau, Alaska filled with water beginning on May 16, 2016 then drained after a glacial outburst on July 1, 2016. The Mendenhall River, near Juneau Alaska, is experiencing high flows that threaten homes and other infrastructure downstream. USGS field crews, in cooperation with the City and Borough of Juneau, are on-site measuring the river flow to verify readings from the USGS streamflow monitoring station. The National Weather Service issues flood forecasts based on this station’s data. The current high flows were brought about by the release of a glacial dammed lake on the nearby Mendenhall Glacier. A tributary glacier to the Mendenhall Glacier recently receded, leaving a new basin (Suicide basin) that fills up with melt water every summer. The water level in the basin rose 100 feet since May 14, 2016 and began draining through the glacier on June 29, a process known as a glacial outburst flood. This new USGS monitoring station in the Suicide basin provided emergency officials with a 3-day warning on June 29th, before the flood peaked in downstream residential areas. The USGS has operated streamflow information station on the Mendenhall River since 1965 (USGS Station Number 15052500). The outburst floods in 2011 (16,400 ft3/s) and 2014 (20,000 ft3/s) are the two highest annual peaks in the streamflow record. Prior to these outburst floods, the estimated 1-percent annual exceedance probability flow (100-year flood) for the Mendenhall River was 17,200 ft3/s. What was once a rare discharge on the Mendenhall is now a frequent event that floods homes and roads. The Mendenhall River drains Mendenhall Lake, which is fed by the expansive Juneau Icefield. In addition to measuring the elevation of the water in the basin, the new monitoring station has a camera with a satellite modem.

Most Juneau residents first became acquainted with Suicide Basin in 2011, when water from the bowl adjacent to the Mendenhall Glacier flooded Mendenhall Lake and Mendenhall River. The jökulhlaup has taken place every summer since then, sometimes flooding riverside homes and campsites.

The Suicide Glacier, a hanging glacier high above the basin, once occupied Suicide Basin. However, sometime in the last 30 years, the glacier split in two parts, with the lower part eventually forming a lake bordered on one side by the Mendenhall Glacier.

The aerial images collected from the drones — flown in a grid pattern over the basin — are turned into photo maps and digital elevation models using special software. By taking comparing these maps and models over time, Kienholz and others can measure things like the lowering of the ice dam, volume of ice in the basin and how much water has left the basin in a flooding event.

The U.S. Geological Survey and Alaska Climate Adaption Science Center have worked closely with UAS to carry out the research.

"We're doing all the drone work and elevation models, but then we use all the USGS products to actually analyze it more in depth," Kienholz said. "We're tracking it over time and seeing how the water is going up using camera images."

Skye Hart, 20, was one of the students in the drones class, and is helping with the research on Suicide Basin. In the class, students learned drone operation, photogrammetry, GIS (Geographic Information System) skills and GPS skills while studying the erosion of the banks of the Mendenhall River.

“It was really relevant to what we do now,” Hart said. “I get to learn more about what we did in the class and actually use the skills I learned directly.”