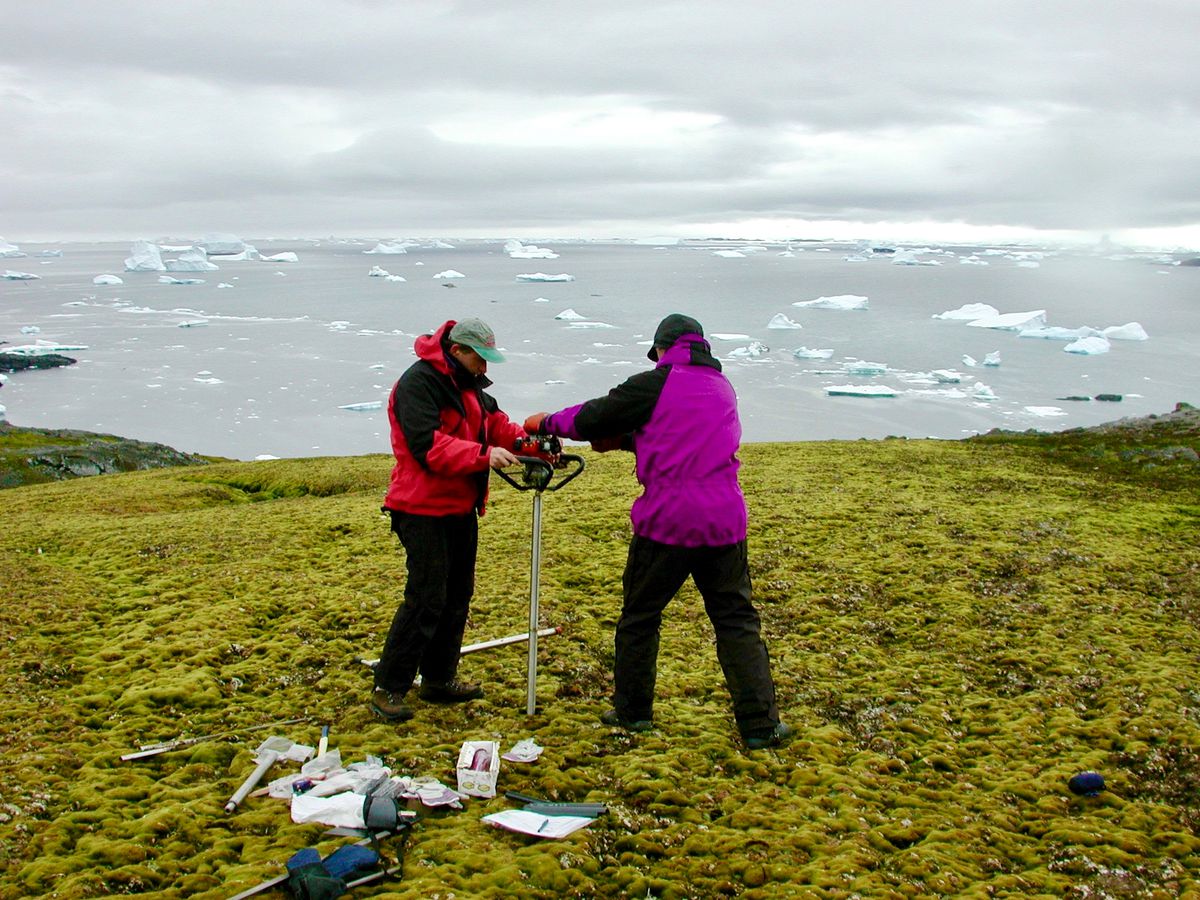 Peter Convey, an ecologist with the British Antarctic Survey, takes samples of moss with his research team in Antarctica. (P. Boelen/BAS)

Peter Convey, an ecologist with the British Antarctic Survey, takes samples of moss with his research team in Antarctica. (P. Boelen/BAS)

From about 1550 to 1850, a global cold snap called the Little Ice Age supersized glaciers throughout the Arctic. On Canada’s Ellesmere Island, Teardrop Glacier extended its frozen tongue across the landscape and swallowed a small tuft of moss.

Since 1850, the plant lay frozen under a 100-foot-thick slab of ice as humans discovered antibiotics, visited the moon and burned 2 trillion tons of fossil fuels.

Thanks to this latest exploit, evolutionary biologist Catherine La Farge arrived centuries later at Teardrop's melting edge to find the tuft of the species Aulacomnium turgidum finally free from its icy entombment. The moss was faded and torn but sported a verdant hue - a possible sign of life.

Climate change stories often highlight the teetering fragility of Earth's ecological system. The picture grew even more dire when a United Nations report said that 1 million of our planet's plant and animal species face the specter of extinction. But for a few exceptional species, thawing ice caps and permafrost are starting to reveal another narrative - one of astonishing biological resilience.

Researchers in a warming Arctic are discovering organisms, frozen and presumed dead for millennia, that can bear life anew. These ice age zombies range from simple bacteria to multicellular animals, and their endurance is prompting scientists to revise their understanding of what it means to survive.

"You wouldn't assume that anything buried for hundreds of years would be viable," said La Farge, who researches mosses at the University of Alberta. In 2009, her team was scouring Teardrop's margin to collect blackened plant matter spit out by the shrinking glacier. Their goal was to document the vegetation that long ago formed the base of the island's ecosystem.

"The material had always been considered dead. But by seeing green tissue, "I thought, ‘Well, that’s pretty unusual,’ " La Farge said about the centuries-old moss tufts she found.

She brought dozens of these curious samples back to Edmonton, lavishing them with nutrient-rich soils in a bright, warm laboratory. Almost a third of the samples burst forth with new shoots and leaves. "We were pretty blown away," La Farge said. The moss showed few ill effects of its multi-centennial deep-freeze.

It's not easy to survive being frozen solid. Jagged ice crystals can shred cell membranes and other vital biological machinery. Many plants and animals simply succumb to the cold at winter's onset, willing their seeds or eggs to spawn a new generation come spring.

Mosses have forged a tougher path. They desiccate when temperatures plummet, sidestepping the potential hazard of ice forming in their tissues. And if parts of the plant do sustain damage, certain cells can divide and differentiate into all the various tissue types that comprise a complete moss, similar to stem cells in human embryos.

Thanks to these adaptations, mosses are more likely than other plants to survive long-term freezing, said Peter Convey, an ecologist with the British Antarctic Survey.

On the heels of La Farge's Canadian moss revival, Convey's team announced it had awakened a 1,500-year-old moss buried more than three feet underground in the Antarctic permafrost.

"The permafrost environment is very stable," said Convey, noting that the perennially frozen soil can insulate the moss from surface-level stresses, such as annual freeze-thaw cycles or DNA-damaging radiation.

The regrowth of centuries-old mosses suggests that glaciers and permafrost are not merely graveyards for multicellular life, but they could instead help organisms withstand ice ages. And as human-caused warming peels away ice cover in the Arctic and Antarctic, whoever makes it out of the ice alive is poised to dominate the budding polar ecosystems.

Convey explained that as melting ice exposes land surfaces, plants generally colonize the new terrain from "somewhere else" via spores carried long distances by the wind. Such far-flung dispersal is slow, often taking decades. But "when something can survive in situ," said Convey of the moss his team discovered, "that really accelerates the recolonization process." These mosses can paint a lifeless landscape green almost overnight, paving the way for other organisms to arrive and establish.

While the elderly mosses discovered by La Farge and Convey are remarkable, the clique of ice age survivors extends well beyond this one group of plants.

Tatiana Vishnivetskaya has studied ancient microbes long enough to make the extreme feel routine. A microbiologist at the University of Tennessee, Vishnivetskaya drills deep into the Siberian permafrost to map the web of single-celled organisms that flourished ice ages ago. She has coaxed million-year-old bacteria back to life on a petri dish. They look "very similar to bacteria you can find in cold environments (today)," she said.

But last year, Vishnivetskaya's team announced an "accidental finding" - one with a brain and nervous system - that shattered scientists' understanding of extreme endurance.

As usual, the researchers were seeking singled-celled organisms, the only life-forms thought to be viable after millennia locked in the permafrost. They placed the frozen material on petri dishes in their room-temperature lab and noticed something strange. Hulking among the puny bacteria and amoebae were long, segmented worms complete with a head at one end and anus at the other - nematodes.

"Of course we were surprised and very excited," Vishnivetskaya said. Clocking in at a half-millimeter long, the nematodes that wriggled back to life were the most complex creatures Vishnivetskaya - or anyone else - had ever revived after a lengthy deep freeze.

She estimated one nematode to be 41,000 years old - by far the oldest living animal ever discovered. This very worm dwelled in the soil beneath Neanderthals' feet and had lived to meet modern-day humans in Vishnivetskaya's high-tech laboratory.

Experts suggested that nematodes are well-equipped to endure millennia locked in permafrost. "These buggers survive just about everything," said Gaetan Borgonie, a nematode researcher at Extreme Life Isyensya in Gentbrugge, Belgium, who was not involved in Vishnivetskaya's study. He said nematodes are ubiquitous across Earth's diverse habitats. Borgonie has found teeming communities of nematodes two miles below Earth's surface, in South African mine shafts with scant oxygen and scalding heat.

When environmental conditions deteriorate, some nematode species can hunker down into a state of suspended animation called the dauer stage - dauer means duration in German - in which they forestall feeding and grow a protective coating that shields them from extreme conditions.

Vishnivetskaya is not sure whether the nematodes her team pulled from the permafrost passed the epochs in dauer stage. But she speculated that nematodes could theoretically survive indefinitely if frozen stably. "They may last any number of years if their cells stay intact," she said.

Borgonie agrees. While he conceded that the finding of Pleistocene-aged nematodes was "a huge surprise," he said "if they survived 41,000 years, I have no idea what the upper limit is."

He views nematodes' virtuosic endurance in a cosmic context. "It's very good news for the solar system," said Borgonie, who believes these feats of survival may portend life on other planets.

Here on Earth, many species are spiraling toward extinction as humans jumble the global climate. But near the thawing poles, a hardy few organisms are revealing incredible stamina. It is ecological gospel that some creatures - from birds to butterflies to wildebeest - survive by migrating vast and hazardous distances to find favorable habitat. More recent discoveries hint at a different migratory mode: through time.

After protracted slumber in Earth’s icy fringes, bacteria, moss and nematodes are awakening in a new geologic epoch. And for these paragons of endurance, the weather is just right.