The dragonfly, Alaska’s state insect, is a nimble flying machine 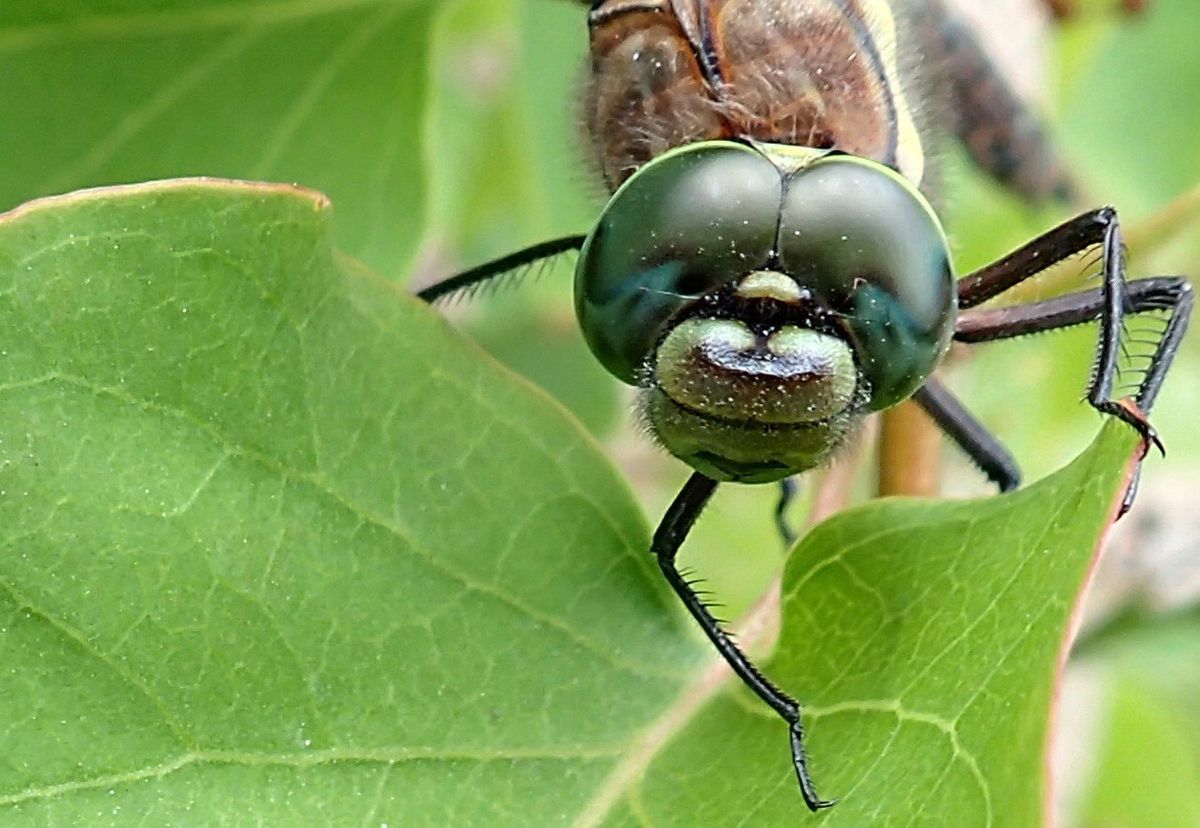 The compound eyes of a sedge darner dragonfly. Each eye is made up of thousands of light-and-motion-sensitive units. (Ned Rozell)

The compound eyes of a sedge darner dragonfly. Each eye is made up of thousands of light-and-motion-sensitive units. (Ned Rozell)

The Piper Super Cub is a nimble favorite of Alaska bush pilots who land on and take off from gravel bars and mountaintops. Engineers who designed the plane in the 1940s found a simple model that still works.

Another flying machine, the dragonfly, has not changed much in 300 million years, except it is no longer as large as a raven.

Humans have for a long time admired the design of this creature, one that can fly backwards and zigzag with abrupt turns.

Aerospace scientists at the University of Colorado once leashed live dragonflies inside a wind tunnel. By observing smoke added to the wind, the researchers noticed the dragonflies twisted their wings on each downstroke. The smoke curled off the top of their wings, reducing air pressure there and providing more lift than is available to any aircraft with static wings.

A few years ago, scientists at Harvard, the University of Chicago and Columbia developed a mathematical model in an attempt to predict and duplicate the complex patterns within dragonfly wings.

Each veined dragonfly wing, “a model of evolution and biological engineering,” is as unique as a human fingerprint, wrote Harvard Ph.D. student Jordan Hoffmann, a mathematician who likes to find order in systems that seem to have none. His team came pretty close to nature’s design.

[The weird world of northern dinosaurs is coming into focus]

[What’s the purpose of a moose’s long nose?]

Worldwide, there are about 3,000 species of dragonfly. Thirty types live in Alaska. The largest in the state is the lake darner, a cool blue dragonfly that turns dark when the air is chilly. The delicate treeline emerald flies around cold ponds north of the Brooks Range, miles farther north than any tree. The azure darner patrols the extreme northern coast of Alaska, just a few yards from sea ice and the Arctic Ocean.

The dragons of summer live as flying adults in Alaska for about two warm months. They can live much longer as larvae in bodies of water. After hatching from an egg and developing into an aquatic creature, the larvae use a spoonlike lower lip to capture small fish, tadpoles and other insects. Larvae then crawl above the water on the stems of aquatic vegetation, shed their larval skins, and pop their new wings out to dry.

Often pursuing moths, midges and mosquitoes from beneath, dragonflies succeed at catching their prey about 95% of the time. This is according to Harvard researchers who in 2011 documented dragonflies’ efficiency at capturing fruit flies.

Dragonflies have such a short time to shine here in Alaska because, like most insects, they need warm air temperatures for their body parts to perform. Biologists Pat Doak and Todd Sformo studied dragonflies on the UAF campus in Fairbanks. They found the adults started flying when the air temperature warmed to 57 degrees Fahrenheit.

Alaska school kids voted for a state insect during the 1993-94 school year. The four-spotted skimmer dragonfly took first, over the second-place mosquito. Rep. Irene Nicholia, who sponsored the bill, explained.

“The dragonfly’s ability to hover and fly forward and backward reminds us of the skillful maneuvering of the bush pilots in Alaska,” she wrote.