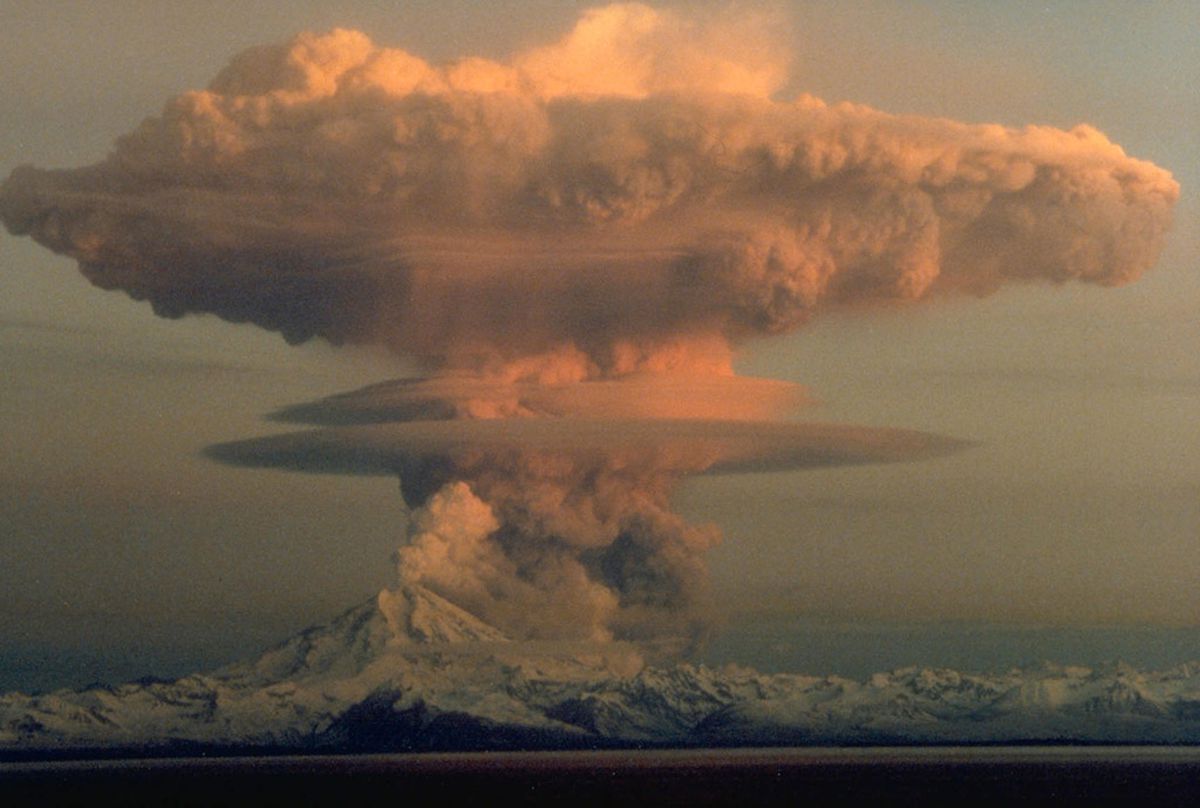 On December 15, 1989, a pilot who had flown a 747 passenger jet all the way from Amsterdam was looking forward to landing in Anchorage. There, he would take a short break before continuing to Tokyo.

Descending over Southcentral Alaska, he and his co-pilot saw what looked like an inky storm cloud ahead. Flying into it, the pilot powered up the four engines in an attempt to climb to clear sky. What happened next changed how we monitor volcanoes all over the world, and made the Alaska Volcano Observatory what it is today.

On that December morning 30 years ago, volcanic ash from Mount Redoubt melted inside all four jet engines of that 747. The ash cooled, coating the engines with glass and restricting air flow. The engines responded by shutting down.

Powerless, the plane dropped more than 2 miles, heading for the Talkeetna Mountains. Their visibility restricted by the ash-scoured windscreen, the pilot and co-pilot tried restarting the engines six or seven times.

After eight minutes, two engines coughed to life at 17,500 feet, allowing the pilots to level the aircraft. At, 13,300 feet, as the mountains got closer, the glassy engine-coating cooled and shattered into crystals, falling away. The other two engines started. The pilots turned the reborn aircraft and landed in Anchorage.

All 231 passengers aboard reported no injuries. But some vowed never to fly again, after the next available set of planes carried them home.

Tilly Barella was a passenger on the 747 that flew through the Mount Redoubt ash cloud in 1989. She lived in Holland, and was on her way to a vacation in Japan. Anchorage Times reporter Todd Bensman interviewed her at the airport the next morning.

“The air went dark through the window, and the engines stopped, and the lights went out. It was dark all over. It was so dark,” Barella said. “And then we just fell, and I knew that was the last minute of my life.”

That terrifying eight minutes was a turning point for volcano research all over the world, and especially in Alaska. Though volcanic ash clouds had previously disabled a jet aircraft in Indonesia, the near-tragedy of KLM Flight 867 happened over America, in U.S. airspace peppered with volcanoes.

An immediate beneficiary of the flight’s near miss was the fledgling Alaska Volcano Observatory, formed a year before to help monitor the dozens of volcanoes in Alaska. The observatory is a team of scientists from the U.S. Geological Survey, UAF’s Geophysical Institute and the Alaska Division of Geological and Geophysical Surveys.

“(AVO’s) budget went from $500K (per year) to $6 million almost overnight,” said John Power, former head of the observatory who now has the title of USGS research geophysicist.

“Before Redoubt, we were monitoring four volcanoes close to Anchorage. Now, we’re monitoring 32 volcanoes in Alaska with instruments in the ground, and we track activity at others with satellites and infrasound.”

Thirty years ago, Power was one of the first employees of the observatory, working in Fairbanks at the Geophysical Institute. He was among several people who noticed Redoubt shaking with dozens of small earthquakes in the days before the eruption.

“It really came out of nowhere,” said Power, who spent many hours watching the jumpy seismometers scientists had installed on the volcano’s flanks just one year earlier.

Power and his colleagues issued a warning on a faxed sheet, one that the Dutch pilots did not see as they readied for their flight over the top of the world. The warning system in place today was a direct result of the 1989-1990 Redoubt eruption.

“The aviation color code (yellow for elevated unrest, red for an ash-spewing eruption) was developed on the fly during the Redoubt eruption,” Power said.

USGS volcanologist Tom Casadevall traveled from Denver to Anchorage to monitor Redoubt’s gas emissions as the eruption was going on. When he arrived at Anchorage International Airport, Casadevall saw the KLM aircraft sitting idle on a taxiway. In that era of lesser security, Casadevall drove out to the plane and met two engineers, one from General Electric and one from Boeing.

The men were supervising the removal of two of the engines they would ship back to GE, to find out precisely what had happened. Casadevall became interested in how solid silicate particles spewed by the volcano had shut down the jet engines. He became a student and teacher of the hazards of volcanic ash, later becoming one of a few scientists to spread the message.

“The lessons we learned from Redoubt, we took around the world,” he said.

The eruption also resulted in collaboration between government entities like the Federal Aviation Administration and National Weather Service, and pilot training that included what not to do (make engines hotter by powering up) when encountering an ash cloud.

“The pilots didn’t understand what to do when flying a jet into an ash cloud,” Power said. “We hope the same thing would not happen today.”

Redoubt, the 10,000-foot volcano 60 miles west of Kenai across Cook Inlet, erupted for half a year, from December 1989 to May 1990. Redoubt also erupted 10 years ago, in March and April of 2009, sending up dark clouds of ash through which no pilot flew.