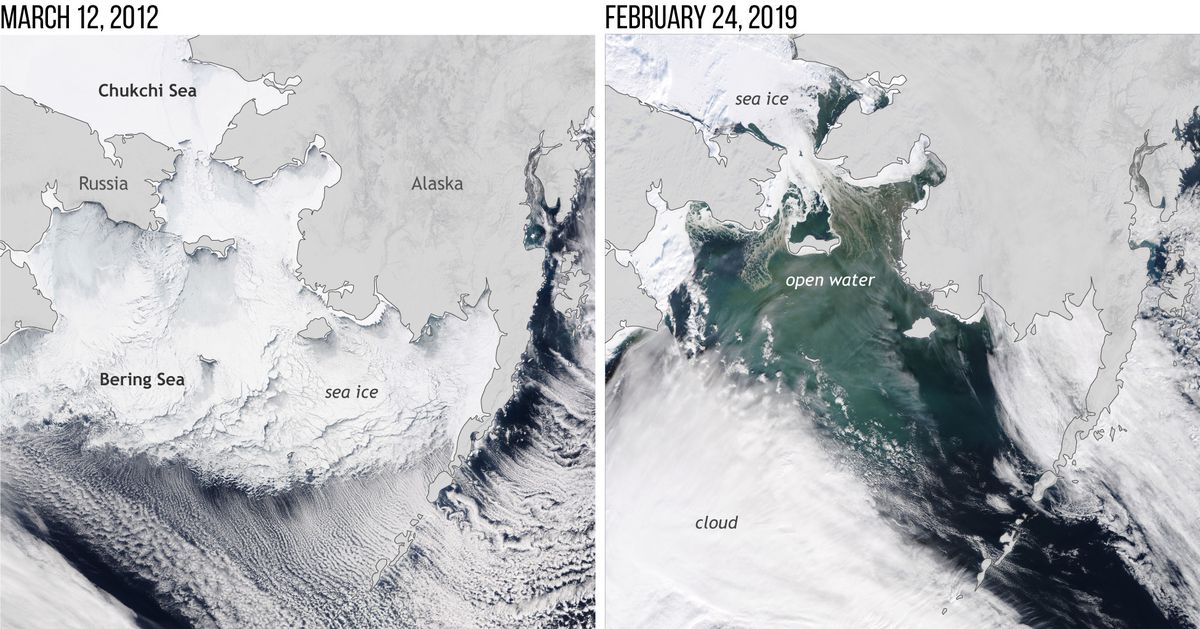 This NOAA satellite image of the Bering Sea in March 2012 shows extensive sea ice coverage, which was not the case near the maximum ice time this February. (Courtesy NOAA)

This NOAA satellite image of the Bering Sea in March 2012 shows extensive sea ice coverage, which was not the case near the maximum ice time this February. (Courtesy NOAA)

SAN FRANCISCO — “This picture is what we’re dreaming of today,” Mellisa Johnson said to reporters sitting in a packed press conference room at the Moscone Center, during the Fall Meeting of the American Geophysical Union.

Johnson was at a podium, pointing to a slide of Western Alaska. It showed white sea ice coating the entire Bering Sea and hugging the coast of Alaska, from Wales all the way down to the island of St. Paul.

Seeing an image like that at this giant meeting is not a surprise. But, in the 13 years of the annual Arctic Report Card press conference, Johnson is the first expert behind the microphone who is not a scientist.

Mellisa Johnson is a Native woman who grew up in Nome and now lives in Anchorage. She came to San Francisco at the invitation of scientists to tell of changes more bizarre in her world than a tornado would be in downtown San Francisco.

She talked to a few dozen reporters about her home, a place that gets so cold in winter that salty ocean water turns to ice just offshore. She spoke of how unsettling it is to have sea ice not in sight for much of the year in a warmer Alaska.

“The elders I meet with are saying they remember ice 10 feet tall 50 years ago,” she said of multiyear sea ice that survived the heat of several summers. Researchers say it makes up less than 1% of sea ice today. “Now, in 2019, we don’t have any ice. It’s weird.”

A few dozen feet from where Johnson spoke, on a sunny December day with temperatures in the 60s, many people with no idea of what sea ice is walked the sidewalks. Inside, a few people who depend on that clean frozen platform to haul up and butcher beluga whales described how unusual it is for waves to be lapping at the shores in midwinter.

“If I can get (a bearded seal) 5 miles offshore of town, it’s great,” said Jerry Ivanoff, a Native from Unalakleet who was also present at the press conference. “But in the last two years, I had to travel 280 miles to get my (bearded seal, rich with tasty oil and meat) because there’s no ice (on the coast in front of Unalakleet)."

Scientists at the press conference pointed out the drastic shrinkage and extent of the ice that floats on top of the world, as well as thawing ground that had been frozen for thousands of years, before handing the microphone to the Alaska Natives.

The editors of the Arctic Report Card invited Johnson and Ivanoff down to San Francisco to share what they are seeing, so far from where most of Earth’s people live.

“I think it’s important to show that these changes are impacting people today,” said Don Perovich, a sea ice expert from New Hampshire who has spoken at this press conference off and on since 2006.

[Stronger winds in store for Northwest Alaska in coming decades, scientists say, with bigger impacts due to declining sea ice]

Perovich and others in years past have talked about a tipping point. It may have happened with sea ice between 2006 and 2007, when its coverage on the northern oceans shriveled, and has not recovered since. The Arctic Report Cards each December since then have been a northern fish story, with the salmon getting bigger with each telling.

The warming Arctic has inspired a lot of headlines on the day after this press conference in the past 13 years. But the broken freezer on top of the world has remained an abstraction for most of the planet’s 7.7 billion people.

There is now just one-third of the average sea ice coverage on the Arctic Ocean than there was when Jerry Austin was a teenager. That matters to him, because he burns a lot more gas in his snowmachine to find caribou, which are finding exposed lichen to eat farther north than they used to, which Austin believes is because of less snow cover and a shorter winter than before.

If the scientists are right about the interconnectedness of the world’s systems — as they were right about the disappearance of sea ice and how that feeds into so many other changes — the warming north will soon touch many more people. Microbes woken in the thawing ground will gobble ancient carbon and release greenhouse gases that have been locked up for millennia; liquefied northern glaciers will help float septic tanks in Miami, and free moisture from open ocean off Point Hope in midwinter will be tied to cold snaps in Georgia and Tennessee.

If the trajectory continues — and scientists in the press conference gave no reasons why it will not — Mellisa Johnson’s image of winter sea ice that covers the Bering Sea might be a dream that will never again come true.