The secret life of a red fox family 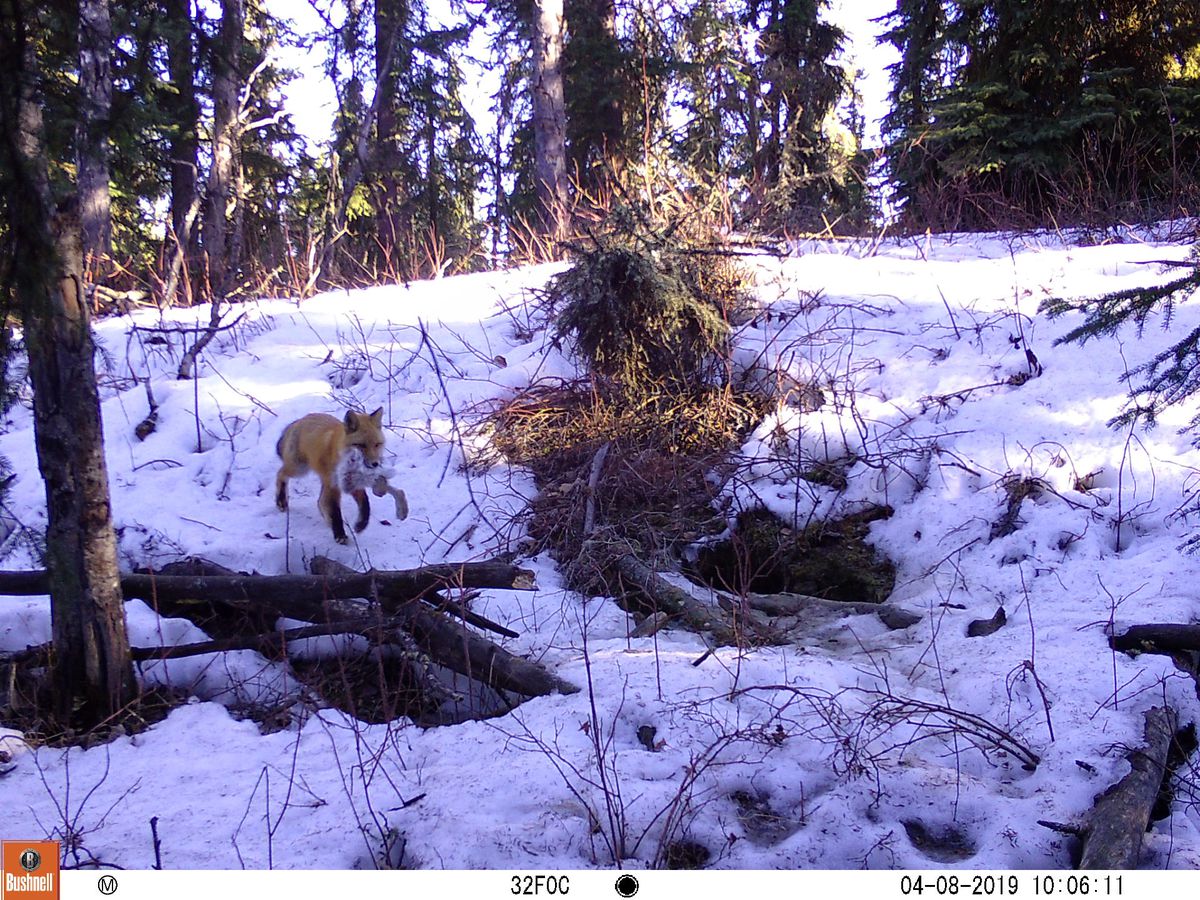 A male red fox returns to a den with a snowshoe hare. (Photo by Ned Rozell)

A male red fox returns to a den with a snowshoe hare. (Photo by Ned Rozell)

One year ago, in a world with the same mountains and valleys but feeling very different, we made a discovery.

My wife, daughter, two neighbor kids, three dogs and I were out enjoying the freedom of crust skiing, when cold overnight temperatures freeze a melting snow pack. A hard top layer forms, allows skiing anywhere, not just the trail system.

We skated between spruce trees to a cold spot about a mile from home, where a small hill of poplar trees and rose bushes rises from surrounding low tundra plants. There, we noticed a hole in the hill at knee level. The snow at the entrance to the opening was dirty, with tracks we couldn’t identify.

At that moment, I found a use for the trail camera my wife had just given me for my birthday. The next morning, we returned. I strapped the camera to a skinny spruce, aiming it at the hill.

Less than three hours later, the motion-sensitive camera snapped its first image: A red fox had emerged from the hole, sniffing at the ground where humans and dogs had shuffled the day before.

It felt like the woods had just whispered a secret. I hoped our many-legged presence there would not make the fox abandon its den site.

It did not, and over the next year, we saw the secret life of a red fox family.

At the beginning, in late March 2019, there were two characters in the drama: the dark-eyed female, smaller of body, her sides black as well as orange; and the dashing male. He was larger, his coat a brilliant orange, with black highlights on his flowing tail, feet and ears.

Both foxes were small by dog standards, with the female probably about the same weight — 12 pounds — as our Chihuahua mix, Pepe. The foxes’ flowing tails make them seem much larger.

One day after I installed the camera, the handsome male appeared. In his mouth was a ball of white fluff — a snowshoe hare. Hares became a common site on the still images, with both foxes returning to the den with one about every other day. Red squirrels were often in the foxes’ mouths, too. They probably returned with many voles, but they were too small to see.

That the foxes were returning to the den, especially with food, was a hint that the female was pregnant.

On May 24 we found out she was, when a photo first showed a milk-chocolate colored kit. It was one of four young born to the pair.

Two had their father’s coloring; two their mother’s “cross fox” black and orange. Though female foxes, also known as vixen, can have as many as a dozen kits, four is the most common number, according to writers of the Alaska Department of Fish and Game’s excellent Wildlife Notebook Series.

The kits were cute and playful, and added to the many thousand red foxes in Alaska, from Southeast to the North Slope. The species (Vulpes vulpes) is one of the most studied mammals in the world, for a few reasons. They exist all over Europe and Asia and much of North and South America, and aren’t as shy toward humans as coyotes or wolves. Plus, most people think foxes are beautiful, and their dens are often easy to find.

By late May, the camera informed me our kits were leaving the safety of the den on their own, popping out to play with one another and explore.

In late June, the kits were still smaller than their mother, who looked skinny and a bit ragged by comparison. The parent foxes, partners in the job, were by then probably starting to teach the young how to stalk and catch squirrels and voles.

In mid-July, the kits were as large as their parents, though more supple and newer looking.

By the end of the month, all activity stopped at the den. In August, there was just one photo of a fox, colored like its mother, wandering past. By then, the family unit had broken up. Each fox was on its own. I felt like my kids had left for college.

Earlier last summer, when the parent foxes were gathering food for four extra mouths, we and our neighbors would see them sometimes in our yards (often eyeing the chickens), or crossing nearby roads. Since then, after our long, cold winter, we have seen many fox tracks, but haven’t eyeballed them for a while.

Meanwhile, a year later, the skinny spruce tree still holds the trail camera, pointed at the den. Soon, when the snowpack’s crust is firm, we’ll ski out again, pull out the memory card, and see if the den might produce more red foxes in 2020.