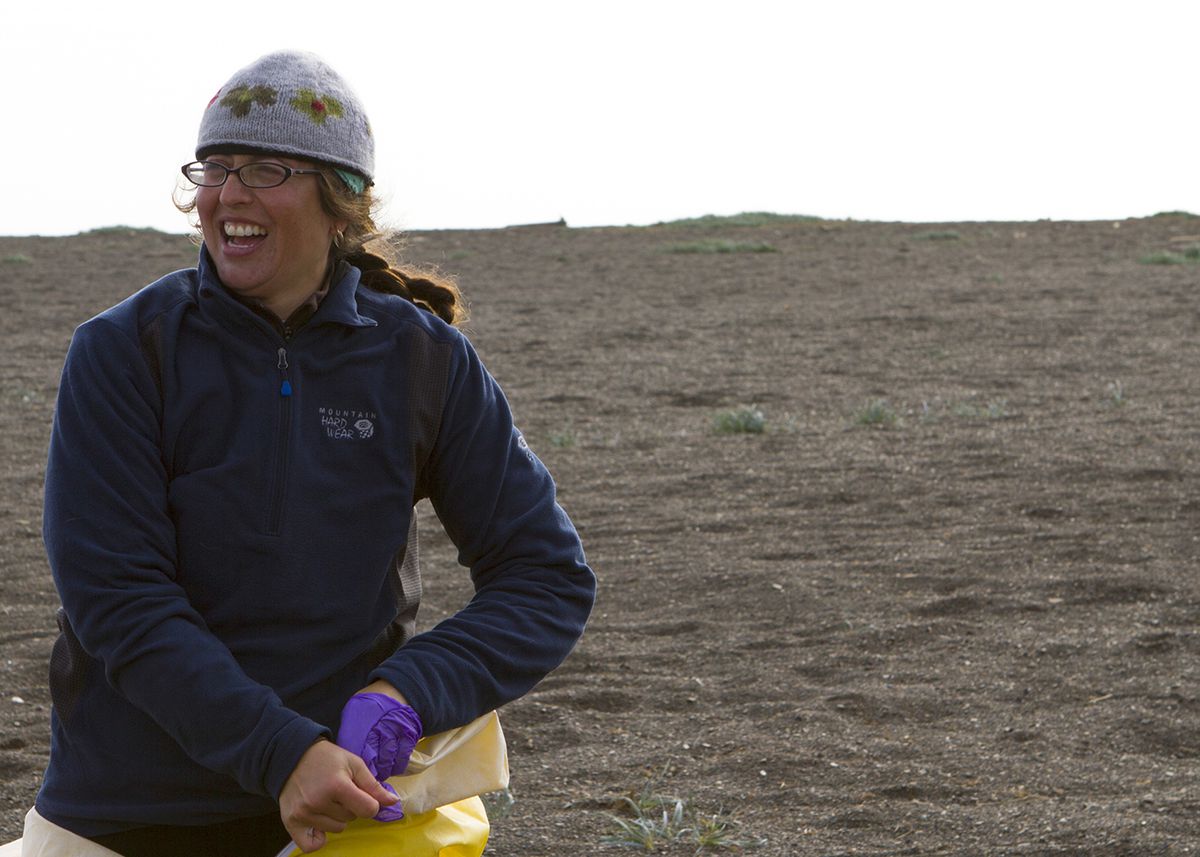 Nicole Misarti at Point Lay, Alaska, where she was helping recover bones from walruses that had been trampled by other walruses nine months before. (Photo by Kelsey Gobroski / UA Museum of the North)

Nicole Misarti at Point Lay, Alaska, where she was helping recover bones from walruses that had been trampled by other walruses nine months before. (Photo by Kelsey Gobroski / UA Museum of the North)

Nicole Misarti has gagged in the name of science.

The University of Alaska Fairbanks scientist uses new and old bones of animals to determine what their lives were like. Those bones are not always clean and odor-free.

Five years ago, to recover bones from walruses killed during a group-trampling event near Point Lay, Misarti and several colleagues traveled north with sharp knives and other tools, including a chainsaw. The walrus bodies were intact, but a bit ripe from lying on the beach over the winter.

They butchered two large females, a juvenile and an infant walrus, placing their skeletal remains in body bags for transport to the UA Museum of the North in Fairbanks. Travel delays caused the bags to fester on the runway at Point Lay for a few June days before making it to Fairbanks.

“By the time we got them back to Aren (Gunderson, who works cleaning bones for the museum), they were disgusting,” Misarti said.

Over time, microorganisms ate the flesh from those bones, and the museum gained four full walrus skeletons. Misarti’s group was happy to help enrich the museum’s collection, one of the largest assortments of walrus bones in the world.

Bones thousands of years older than those have helped Misarti and her colleagues learn, among other things, that Alaska walruses of the past had a more diverse diet than walruses do today.

How does she figure that out? When Misarti gets a fingernail-size chip of 3,500-year-old walrus bone from an archaeological site or via the museum’s curators, she first leaches out fat with solvents. Then she soaks the fragment in acid.

That leaves behind a spongy bone piece called collagen, a protein that holds the information Misarti seeks. Workers at UAF’s Alaska Stable Isotope Facility apply their techniques to the bone fragment, revealing the carbon and nitrogen isotopes within.

These, along with other techniques used on bones and teeth, tell Misarti what a walrus ate, as well as its sex and age. She uses other methods to determine the animal’s average stress level over its lifetime.

In her studies, she and her colleagues found that walrus in the distant past ate a larger variety of food than they do today. Walrus eat clams almost exclusively these days, but in the past their diets may have included more fish, seabirds and even seals.

Walrus of the distant past also seemed to have been more stressed than their hormone levels show they are today. Walrus that Misarti’s team has studied seem to be more stressed when their populations are high.

When she shared those results with a resident of St. Lawrence Island, Misarti said her explanation made him feel better in this era of less sea ice — the floating platform walruses use to rest between dives to the sea floor for clams.

“This is giving me some hope for the walrus,” Misarti remembered the elder telling her. “Maybe they’ll adapt to this (lack of sea ice) because they’ve adapted to some of these changes in the past.”

Misarti, who has applied her techniques to creatures from Patagonia to Utqiagvik, will next look at old bones preserved in grassy, sandy middens left behind by ancient people on the Alaska Peninsula and the Aleutian Islands. She will focus on bones from sea lions, fur seals and cod fish, but she and her fellow researchers can find value in anything with a backbone.

“You can get this data in pretty much any bone you can find,” she said. “You can trace changes in these ecosystems over thousands of years.

“We’re in a world where everything’s changing really rapidly. At least we can get an idea of what’s coming down the road.”