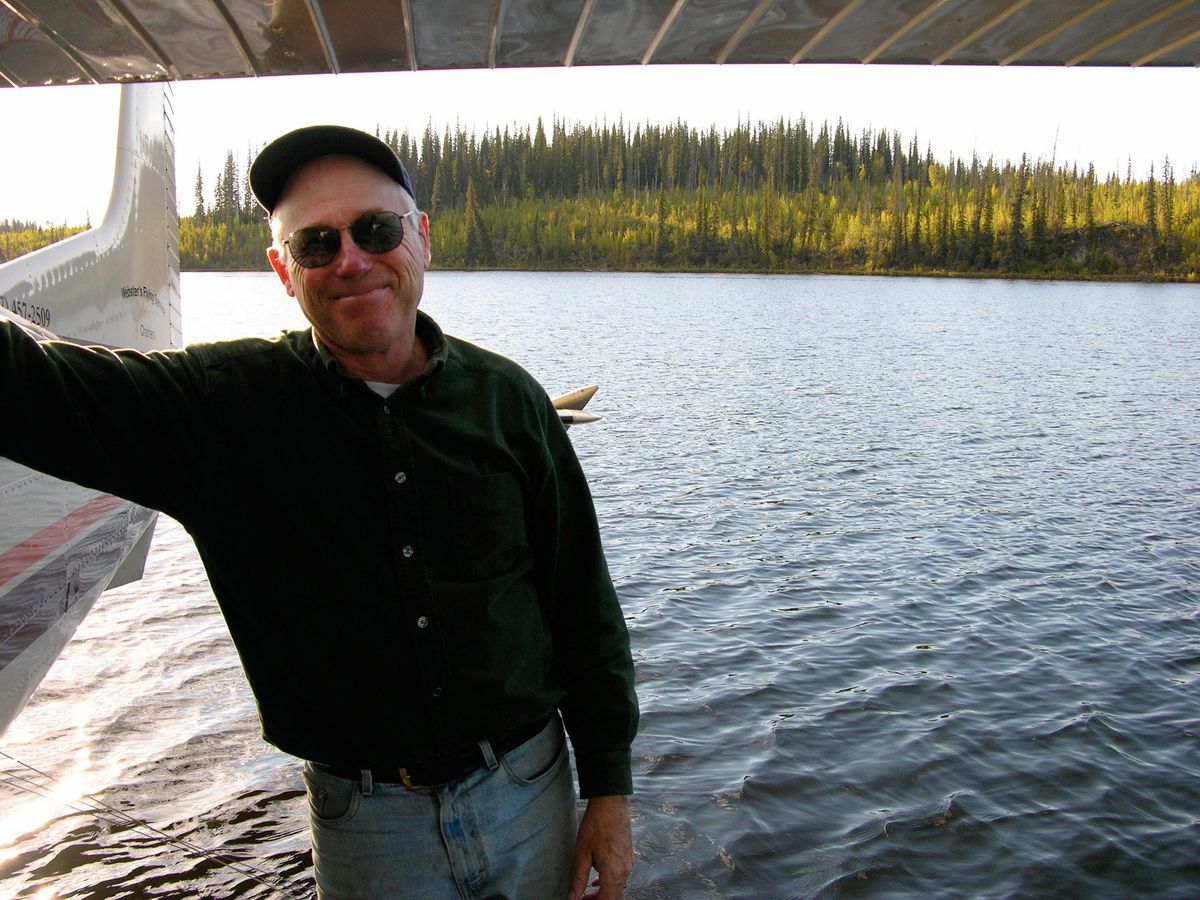 Jim Webster at Sands of Time Lake, Yukon Flats National Wildlife Refuge, in September 2007. Webster died May 14, 2020 in a plane crash near Utqiagvik. He was 76 years old. (Photo by Lesleigh Anderson)

Jim Webster at Sands of Time Lake, Yukon Flats National Wildlife Refuge, in September 2007. Webster died May 14, 2020 in a plane crash near Utqiagvik. He was 76 years old. (Photo by Lesleigh Anderson)

Researchers from around the world are mourning the loss of a longtime Alaska pilot who they say went above and beyond the call of duty to support science in the Arctic.

Jim Webster, owner of Webster’s Flying Service in Fairbanks, died on May 14 after his small plane struck the snow about 80 miles east of Utqiagvik on Alaska’s North Slope.

Ben Jones, a friend and the lone passenger, survived.

Now the research professor with the University of Alaska Fairbanks is collecting stories from colleagues to earn Webster a posthumous honorary degree from the university.

In the days after the crash, Jones, 41, issued a call on Twitter asking scientists for stories about Webster’s efforts enabling their remote field work.

In the tweet, Jones shared a photo of himself outside the hospital showing his broken right hand in a sling, a patch on his head covering up his stitches.

Jim enabled science all over alaska. I flew over 500 hours with Jim over the past 14 years studying permafrost, lakes, fires, dunes, and coasts. I would like to commemorate his legacy. Please send me a private message or email on how he enabled your science.

Another photo shows Webster the day before the crash, looking toward the Cessna 185 and the cabin at the Teshekpuk Lake Observatory where they had camped.

“Jim enabled science all over Alaska,” Jones wrote on Twitter. “I flew over 500 hours with Jim over the past 14 years studying permafrost, lakes, fires, dunes, and coasts. I would like to commemorate his legacy.”

Jones said Wednesday that he had received close to 200 responses.

Webster was an Alaska bush pilot for nearly half a century.

He moved to Alaska in the early 1970s after serving in the U.S. Navy Air Corps. At the time, he flew commercial float planes in Ketchikan.

He even appeared in a Busch beer commercial, a rugged Alaskan in flannel, soaring past snowy peaks.

Jim and I were able to talk for about an hour before he passed. A lot of that is for Joan or between Jim and I but one thing to share outwardly - When people believe in what they’re doing it makes life a little better (Busch Beer commercial that Jim starred in in the 1970s) pic.twitter.com/26jyiKxmde

In the last couple of decades, Webster made a mark flying field teams to remote sites.

Where other pilots would drop off researchers and depart, Webster stuck around. He sometimes stayed with teams for weeks, sleeping on an air mattress inside the plane and “engulfing” himself in the research, Jones said.

“He’d hike a mile helping carry your gear," Jones said. “He’d take notes for you if were short-handed in the field. He was just part of the team.”

Webster’s help supported a wide range of studies, on topics ranging from fish runs to the impacts of climate change.

“He was crucial to getting in and out of sites not having to carry that extra person who takes up more space and can add another flight,” Jones said. “It made everything so much safer and more efficient."

He helped many people complete research projects to earn advanced degrees, she said. He helped her for years starting in 2007, as she analyzed hundreds of lakes for a research project in the state’s Interior.

“I can’t imagine when I come to Alaska next that I won’t fly with him,” Anderson said.

“He was so kind and patient, there was never a negative gesture from him,” Anderson said. “He was so willing to circle a lake or three four times to find the best place to camp. That was Jim.”

Webster found clever solutions to speed up studies, such as quickly anchoring his floatplane in lakes so scientists could collect sediment cores off the floats, instead of unfolding inflatable rafts, Anderson said.

Webster’s obituary in the Fairbanks Daily News-Miner said he “contributed to more than 100 research papers, a dozen graduate student degrees, and helped launch the careers of a number of young and enthusiastic researchers.”

His long flying experience reassured researchers, allowing them to stay focused on their observations from the air, Jones said.

“He was always very safe. He wouldn’t mess with fog. He wouldn’t land on a lake that looked too rough," Jones said.

Jones said the crash occurred at about 10 p.m., with at least 7 miles of visibility. They had a roughly 800-foot cloud ceiling.

They had been measuring lake ice and servicing weather stations. After deciding to avoid one last stop where the ground looked bumpy, they were returning to camp and were banking left when the plane struck the ground.

The National Transportation Safety Board led the investigation into the crash. A preliminary report on the crash should be released next week, said Clint Johnson, NTSB Alaska chief.

Jones said he has no idea what led to the crash.

“If something happened in that moment, I can’t figure out,” he said. “I just remember banking and then all of a sudden it was the impact.”

The plane slid probably more than 100 yards over snow, before cartwheeling and coming to rest upside down, Jones said.

Jones, his head and hands sliced open, took steps to control the bleeding.

She communicated with the North Slope Borough search and rescue team, helping orchestrate a rescue in freezing conditions. Jones said responders mobilized remarkably fast, and a helicopter arrived within 2 1/2 hours of the crash.

“I have a lot of praise for the great work the borough does," Jones said. “It was pretty unbelievable.”

Webster recovered consciousness several minutes after the plane came to rest, stunned but able to unbuckle himself. Jones lowered him to the ground.

“I could tell he was too severely injured to make it,” Jones said. “But he hung in there for the better part of an hour, I’d say.”

The two shared last memories. Jones reassured Webster that he would share his friend’s final sentiments with his wife, Joan.

“I think by the end he was in a good mental space knowing he was with someone he cared about and vice versa, and he died doing something that he loved to do,” Jones said.