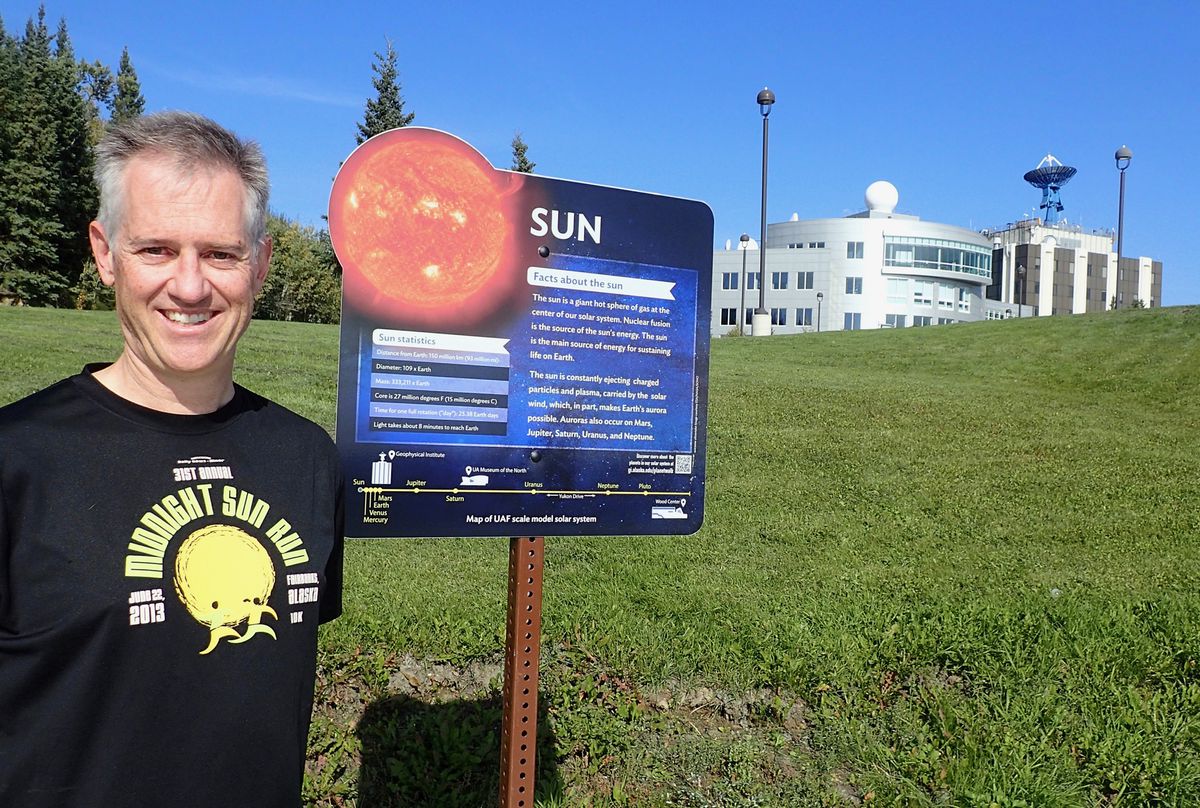 Space physics expert Peter Delamere at the start of the new UAF Planet Walk in Fairbanks. (Photo by Ned Rozell)

Space physics expert Peter Delamere at the start of the new UAF Planet Walk in Fairbanks. (Photo by Ned Rozell)

It is a pleasant day for a walk in middle Alaska, with blue sky overhead, and people perhaps looking for something to do outside, with lots of space and sweet-scented summer air around them.

Not long ago, I hiked the length of a new planet-walk display on the University of Alaska Fairbanks campus with Peter Delamere. In a little less than 1 mile, we spanned the relative distance from the sun to dwarf planet Pluto. (A similar planet walk exists in downtown Anchorage, as well.)

Delamere is a researcher and teacher at UAF’s Geophysical Institute and Physics Department. He knows a lot about each of the heavenly spheres mounted on signs along Yukon Drive, which is arrow-straight and runs up to the high point of the campus.

I have known Pete for a long time. When he was a Ph.D. student here in the 1990s, I interviewed him for this column about one of his favorite applications of physics, the flying disc. Though a few solar cycles have passed since then, he still, at 50, enjoys playing Ultimate.

With the sun warming our backs from 93 million miles away, Pete showed me the first of 10 signs spread out along Yukon Drive, on the northwest part of the UAF campus, overlooking the flats of the Tanana River. This signpost represents the sun.

The giant hot sphere of gas that enables our existence is not pictured to scale, Pete said. If all the planets on the walk were of representative size, the sun would be a golf ball and Pluto a speck of dust.

We moved a few strides east, to Mercury, the closest planet to the sun. Pete officially classified Mercury as boring, a little sphere pockmarked from impacts, one that has no significant shell of gases we call an atmosphere.

Another step away is Venus, a “hazy blob” with a surface temperature that would melt the lead of your pencil. This is due to a runaway greenhouse effect, Pete explained. Venus reminded him of a cautionary tale as he led me another step, to Jimi Hendrix’s Third Stone from the Sun, Earth.

Were it not for Earth’s 30-mile shell of gases that traps heat, all the water on the surface would be frozen. The greenhouse effect, he reminded me, is crucial for life on Earth.

But it is also possible to have too much of a good thing.

“It’s cool that our neighbor has an extreme greenhouse atmosphere,” Pete said, pointing to the Venus sign. “You worry about the possibility of a transition from this (Earth’s atmosphere) to there. Non-linear feedbacks are a frightening thing.”

What’s an example of a non-linear feedback?

“That’s maybe when more of the Amazon rainforest burns, less plants capture less CO2 and we capture more heat in the oceans — a positive feedback,” he said.

As that thought hung in the air, we walked a few steps to the planet with which humans have long been fascinated, Mars.

The Red Planet might have once been Earth-like, Pete said, with its ice caps at the polar regions and surface features gouged by water.

We turned and continued east, leaving behind the dense cluster of sun, Mercury, Venus, Earth and Mars.

“Now, we start to realize the scale,” Pete said.

Though the first four planets are just steps away from each other, we walked four minutes before we saw the next sign, the one with a portrait of Jupiter. Jupiter is five times as far from the sun as we are.

Jupiter is Pete’s favorite. Not only is it twice as big as all other planets combined, its Great Red Spot is a hurricane-like storm that’s been going strong for more than a century. Even more attractive to the space-plasma physicist is its constant display of aurorae, which Pete ranks the most amazing in the solar system.

Unlike Earth’s aurora, driven by the interaction of our magnet-like planet with the particle-rich solar wind spewed by the sun, Jupiter has aurora that would fire even without the sun. Io, one of its 79 moons, tickles Jupiter’s atmosphere to create aurora.

Pete studies this predictable aurora and the magnetosphere of Jupiter with funding from NASA. The interaction of Jupiter’s moon Io with the planet is similar to reactions he and other researchers have seen during rocket-carried plasma experiments from Poker Flat Research Range, north of Fairbanks.

What is plasma? It’s one of the four fundamental states of matter (along with solid, liquid and gas), a mostly invisible mass of ions and electrons. Though understanding plasma takes some imagination, Pete reminds his students that 99% of the known universe consists of it.

We continued on 158 steps (each one representing 2.5 million miles) to Saturn, with its familiar rings. It is more than nine times larger than Earth, and Pete’s second most-frequent study subject in Alaska and earlier at the University of Colorado Boulder, where he studied before seizing an opportunity to return here.

He has written more than one dozen papers on the ringed planet, mostly on the solar wind’s interaction with Saturn. He used data provided from the Cassini spacecraft, which orbited Saturn from 2005 to 2017, at which time controllers sent it plunging into Saturn’s atmosphere, vaporizing it.

“I know more about Earth’s magnetosphere by looking at these planets first,” Pete said. “Earth is more complicated than these guys.”

We turned again, to continue eastward to ice-giant Uranus. It was a bit of a walk.

“Now the scaling gets crazy,” he said. “Getting to these guys (Uranus, Neptune and Pluto) is incredibly challenging.”

Pete was referring to we humans firing spacecraft from launchpads in the desert to moving targets billions of miles away. The New Horizons spacecraft that passed by Pluto not long ago took nine years to get there from here.

We stopped at a sign for Neptune, installed just outside Skarland Hall, where I bunked as a UAF student during Ronald Reagan’s second term. Pete likes Neptune because it has a quirky moon, Triton, that rotates in the opposite direction of the planet’s spin — a nifty retrograde orbit.

We humans could send a spacecraft to study Triton, Pete said. The mission would cost about $1 billion, equal to everybody in the U.S. sacrificing one cup of coffee for one day.

“It inspires kids,” he said. “There’s so much awe and wonder, like with the Pluto mission. It’s absolutely remarkable we can do these missions.”

We kept on, reaching our farthest point from where we started, about 45 minutes and 0.8 miles away from the sun. We arrived at Pluto.

Pete was pleased. He thought the 45-minute walk was perfect for the target audience, groups of students from elementary school on up.

“It really cements the scaling when you do a significant walk,” he said.

Pete pointed to a recent image of Pluto taken during the New Horizons flyby.

“My daughter thinks the face looks like Snoopy,” he said of an icy methane-nitrogen splotch on the surface.

Pete is an expert on Pluto, classified as a dwarf planet in 2006. A graduate student he works with, Nathan Barnes, recently wrote a paper on the reaction of the solar wind with Pluto. Pete has worked with the plasma-instrument teams on the New Horizons mission since its beginning in 2006.

“When they launched it, I thought it’d be years before we got results, but those nine years flew by,” he said.

Yes, they did. We turned and strolled back toward the sun.

The UAF Planet Walk, along UAF’s Yukon Drive, was the idea of Bob McCoy, the director of the Geophysical Institute. Pete worked with UAF physics students, artists and UAF Physical Plant workers to get signs up representing the planets.