Alaska earthquake that prompted tsunami evacuations, but no big wave, may offer clue in scientific debate 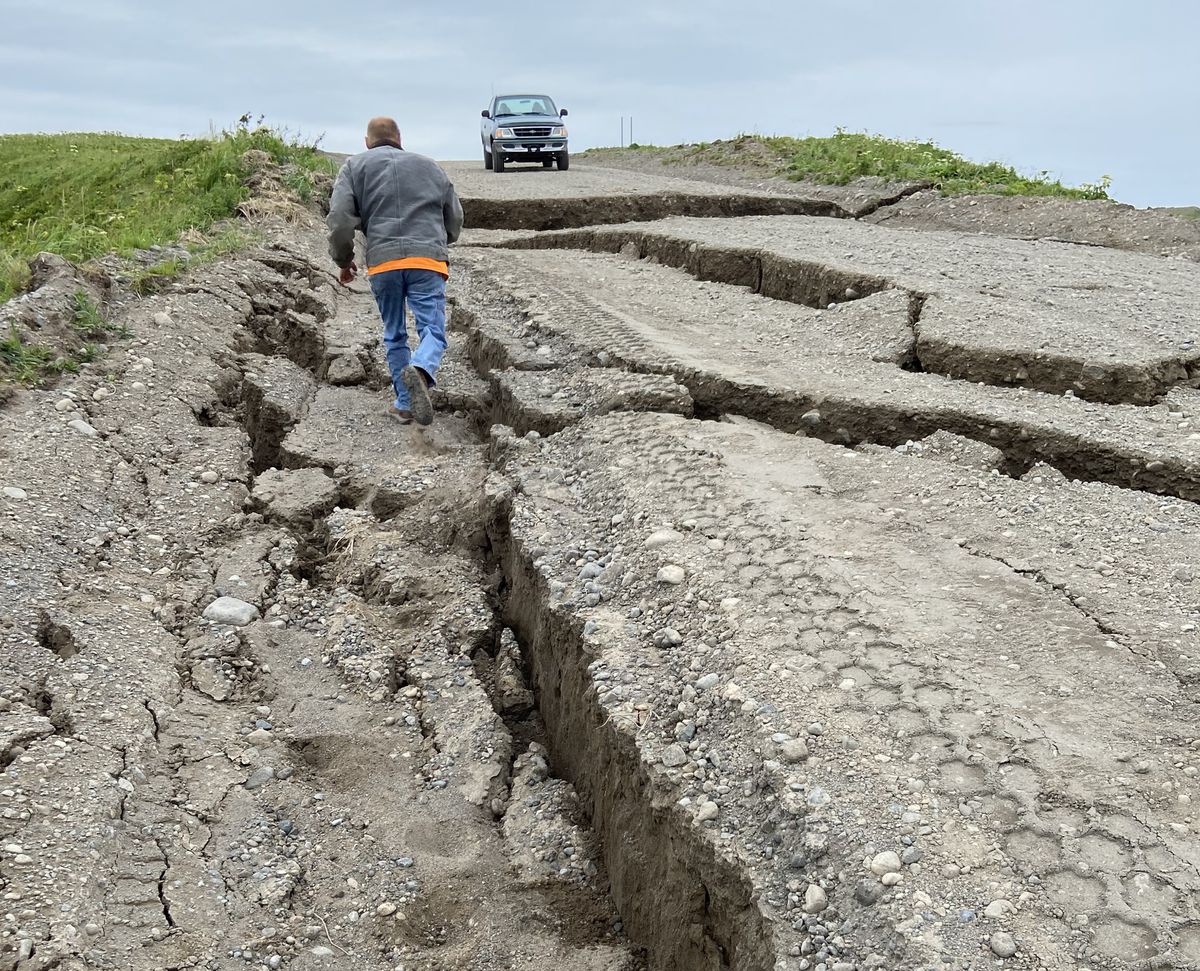 A powerful earthquake that prompted tsunami warnings and evacuations Tuesday night caused serious shaking in some Alaska Peninsula communities but little damage. Now, the state seismologist says the quake itself might offer some insight into a scientific debate on earthquakes in the region.

Shortly after 10 p.m. Tuesday, a magnitude 7.8 earthquake centered about 65 miles south of Perryville on the Alaska Peninsula prompted a series of tsunami warnings that stretched from the Aleutian Islands all the way to the western Kenai Peninsula. Sirens sounded in multiple communities into the night. The warnings sent Alaskans scrambling to higher ground in communities as widespread as Kodiak, Sand Point, Unalaska and Homer.

Jennifer Kalmakoff, 44, was on a four-wheeler ride with her daughter just outside Perryville when she watched a rockslide on an island across the water Tuesday night.

Then the back wheels of the four-wheeler started swerving. Maybe it was because they were going fast on the sand dunes, she thought, but by the time they got back to the village, she saw people heading to higher ground.

When she sat down at home, Kalmakoff saw everything shifting. She stood up and left quickly.

“We didn’t have time to grab anything,” she said. “We just ran straight out the door and headed for the hills.”

National Tsunami Warning Center officials canceled the tsunami warnings less than two hours after they were issued once there was no longer a threat. Kalmakoff and others in coastal communities across the region began to return home. The earthquake did produce a wave, albeit a roughly 10-inch one recorded in Sand Point.

Though some people in Anchorage received tsunami warning alerts, the Anchorage area was not at risk, said Louise Fode, warning coordination meteorologist with the National Weather Service.

Watch the waves from the M7.8 Alaska earthquake roll across seismic stations in North America! This animation, called a Ground Motion Visualization (GMV), shows the motion of the ground as detected on seismometers across North America - each dot is a seismic station and when the ground moves up it turns red and when it moves down it turns blue. Waves generated by an earthquake travel around and through the earth, but they get smaller (attenuate) as they move away from the earthquake location, just like ripples in a pond. Once the earthquake waves are far enough away from the location where the earthquake occurred they can no longer be felt by people, BUT they can still be detected by sensitive seismic instruments. That's what this animation is showing - the waves from the M7.8 earthquake traveling both through the earth and across earth's surface - in the continental US the earthquake the waves are much too small to feel but not too small to measure. The scale is along the bottom. It is in micrometers (microns). For reference, the diameter of a human hair is ~50-75 microns. The star shows the location of the earthquake. The green triangle is the station recording the seismogram shown along the bottom. The red line between the 2 is the "great circle path". *Some of the instruments look like they are experiencing shaking before the seismic waves arrive. This is due to the setting of the animation and the calibration of the seismic instrument. **The video is not reflecting the actual speed of the waves; it has been sped up. The time is shown along the bottom This particular GMV is a brand new beta product generated using the vertical component of our Ground Motion Visualization (GMV). To produce a better coverage, the video is based on all available stations from any FDSN data center, using the fedcatalog service (http://service.iris.edu/irisws/fedcatalog/1/). The video uses the available BHZ, LHZ, or HHZ channel to produce the video, therefore provides a better coverage. To see more GMV's visits http://ds.iris.edu/spud/gmv/17971022

The Alaska Earthquake Center recorded “very strong shaking” in places such as Sand Point, Cold Bay and Perryville, where the center has seismic stations, said Michael West, state seismologist at the Alaska Earthquake Center. The quake released “something like 15 times more energy than was released in the (magnitude 7.1) 2018 Anchorage earthquake,” according to West. Anecdotally, he said they’d heard about things falling off the wall but that they weren’t aware of “significant damage.”

The earthquake itself is generating scientific interest because some evidence shows it may have occurred in a region — known as the Shumagin Gap, near the Shumagin Islands — where large earthquakes haven’t been documented before.

Two tectonic plates meet along the southern coast of Alaska and pressure builds as the Pacific plate goes below the North American plate, known as a subduction zone. Energy builds up and then gets released in the form of earthquakes. Basically everywhere else outside of the Shumagin Gap along that subduction zone has ruptured, West said.

“There has been a vigorous debate about whether it is an area that is somehow immune from large earthquakes because the fault pressure is kind of constantly released instead of building up to a big earthquake ... or whether it’s just really overdue,” West said.

The aftershocks of the Tuesday night quake are occurring west of its epicenter, a “fairly strong suggestion that this earthquake in fact ruptured into the Shumagin Gap,” West said.

But of course, it’s incredibly early in the research, and there’s a lot of data he would like to see. It will take time to figure everything out, West said, including looking at satellite images, and other measurements that might take a while. Plus, scientists can’t go on a field trip to the site of the quake since it’s underwater and it didn’t rupture up to the surface.

West acknowledged the collective sense of relief that the event wasn’t deadly. He said he was scared when he first got the alert because he knows the impact an earthquake in such a location can have.

“With us now being able to rest easy about the impact of this earthquake, yeah, there’s some pretty meaningful science behind it as well,” West said.

James Gridley, director of the National Tsunami Warning Center in Palmer, said early Wednesday that “our procedures put us into a warning even if we haven’t measured a tsunami wave — we imply that there is until we know better.”

Community members in Perryville, home to about 110 people, gathered at a shelter farther up from the water to wait, Kalmakoff said. Around 12:30 a.m. Wednesday, people headed home, Kalmakoff said.

People in the community reported the ground felt “like Jell-O” during the earthquake and that it was hard to stand, Kalmakoff said. In Perryville, she said, they’re more used to magnitude 5.0 earthquakes but not what happened Tuesday.

“Everybody was shaken up,” she said. “It took us a good 45 minutes to calm down.”

Kalmakoff, a former health aide, said she helped tend to a man who was injured after he slipped on broken glass as he was running out. Aside from that, she’s heard about pictures falling and pantry items toppling.

Candace Nielsen, 28, who lives in Cold Bay on the tip of the Alaska Peninsula and sits on the city council, felt the shaking in bed Tuesday night. She’s used to earthquakes, but this one kept going.

“It was like the whole house was on a extremely rough wave,” she said.

Nielsen, her husband and her three kids — who are 5 months old, 2 years old and 7 years old — waited for the shaking to stop. Her 7-year-old daughter was “petrified,” she said. Then they got word of the tsunami warning.

Nielsen went through a similar situation two years ago, but this was scarier because of how strong the earthquake was, she said.

Nielsen got the kids dressed, grabbed blankets and diapers and left the house to meet her mom. They, along with their two dogs, all piled into Nielsen’s truck and headed to Cold Bay’s evacuation site.

Her husband, a first responder, was helping coordinate evacuations in their other truck.

At the evacuation site, she stayed in the truck with her family as a COVID-19 precaution. By 12:50 a.m., her father in Nelson Lagoon texted her that the tsunami warning was canceled.

She just wanted to get home and put her kids in bed, Nielsen said. Cell service at the evacuation site is “patchy,” and Nielsen wanted to check in with the rest of her family.

She thought that she’d have cracks in the foundation of her house, but they only had a plant fall. And in Cold Bay, there was a patch of road damaged.

“I just wanted to get back and tell everybody that we were OK,” Nielsen said. “And just to know that our town was OK and wasn’t under a wave.”