A look at the banana slugs that ooze over coastal Alaska 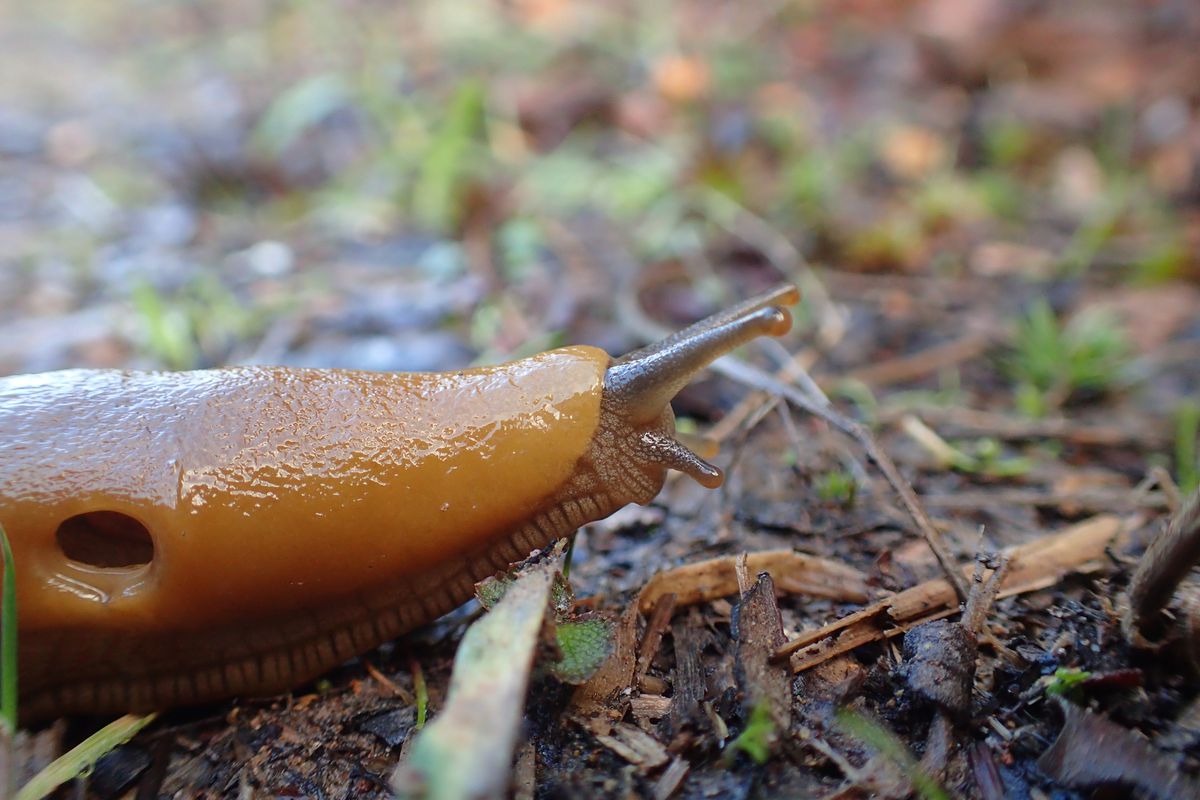 A banana slug on a trail near San Francisco, showing an opening in its skin that leads to its lung. (Photo by Ned Rozell)

A banana slug on a trail near San Francisco, showing an opening in its skin that leads to its lung. (Photo by Ned Rozell)

In this era of limited air travel, my family and I have spent most of our recent months in Fairbanks. Here, we are surrounded by spruce and birch trees of the boreal forest, a swath of mosquito-laden vegetation that stretches from Alaska all the way to Nova Scotia.

We just punched out of that sprucy, swampy belt, driving for eight hours and cresting two mountain passes. After one long day, we reached the saltwater coast of Alaska, and a friend’s boat.

He chugged us into Prince William Sound — blue-green water 1,000 feet deep — and ferried us to rainforest campsites where everything seemed exotic.

But maybe the most striking thing was oozing along a wet trail by our boots: a Pacific banana slug.

The length of a child’s pinkie finger, the slug had four antennae protruding from its face, but no eyes. It gleamed with a slimy coating and trailed a wet path of mucus.

Back home, research on Alaska banana slugs did not turn up much. People submitting photos of them to a naturalist website had not documented any north of Southeast Alaska. We found them near Valdez, connected to mainland Alaska.

This species of banana slug lives on the floor of coastal rainforests all the way south to California. Down there, where frosts are rare as 90-degree days here, the slugs grow as long as pencils.

In Alaska, on the northern fringe of their range, banana slugs do what they do elsewhere: They eat mushrooms, animal droppings, leaves and other sources of carbon on the forest floor. They transform their food into earthy fertilizer, and are not the species with which Alaska gardeners do battle.

The two long antennae protruding from the front end of slugs are like eyes, helping them sense brightness. The shorter pair function as a nose, detecting odors.

Scientists who did research in colder parts of banana slugs’ range found that they disappeared from the surface and probably hibernated during the winter months. They also wondered if the slugs’ eggs, deposited on the forest floor, were tolerant to freezing, as new slugs hatched after cold winters.

Researchers in California have studied the slime that slugs produce. Sticky enough to enable them to cling to a rock, slippery enough to slide upon, the slime is somewhere between solid and liquid.

Slime also contains a compound that has an unpleasant numbing effect on the mouths of creatures that try to eat the seemingly easy meal.

Like earthworms, slugs are hermaphrodites, each possessing both male and female reproductive organs. Though slugs could breed with themselves, they seem to prefer other slugs.

There, it gets weird. Researchers at the University of California, Santa Cruz (team mascot: banana slug) have observed the slugs mating. The slugs generate a good deal of slime in the act, which they eat afterward, perhaps to recycle the nutrients. Following sex, for reasons known only to them, banana slugs will also, sometimes, eat their mate’s penis.