Earthquake and insect discoveries made on an Alaska road trip 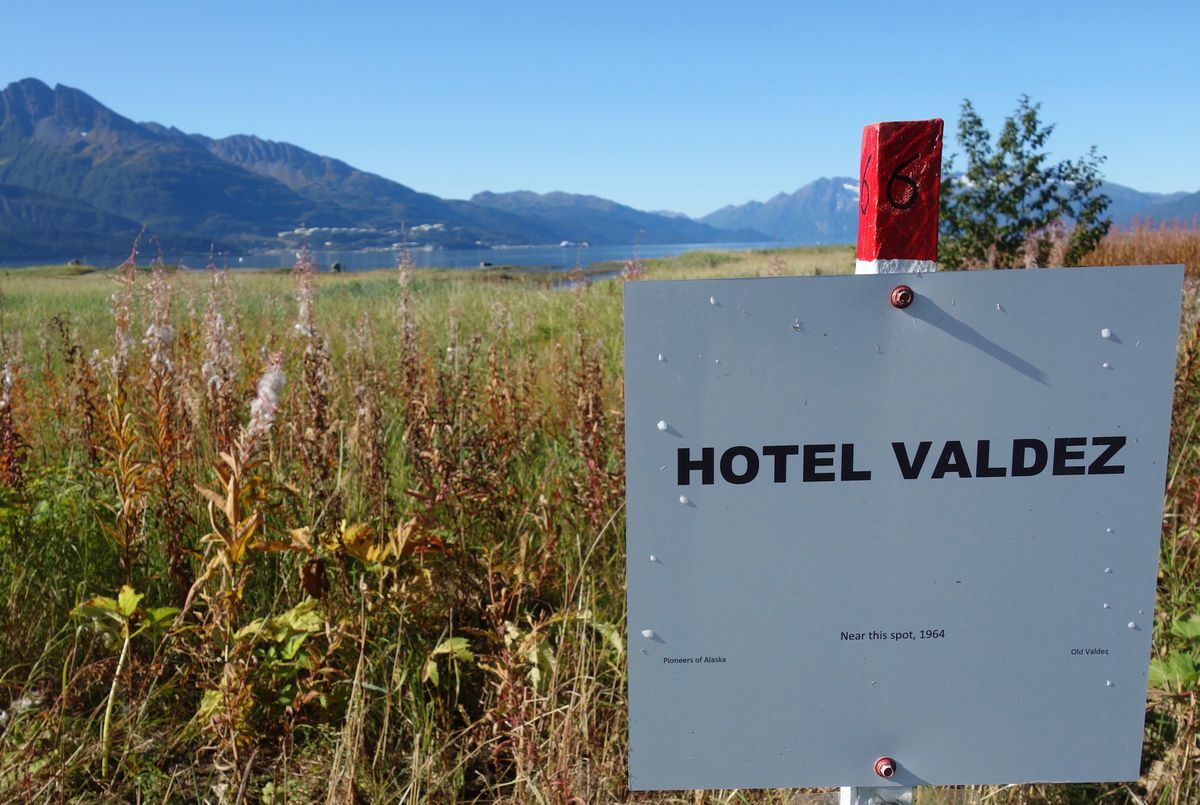 The site of the Hotel Valdez, destroyed in the Great Alaska Earthquake of March 1964. (Photo by Ned Rozell)

The site of the Hotel Valdez, destroyed in the Great Alaska Earthquake of March 1964. (Photo by Ned Rozell)

A few nights ago, stretched in a tent on the blue-gray gravel of the Lowe River floodplain, I woke to a series of sharp jolts. It felt like the earth was a giant halibut, and I was the fishing pole.

Earthquake! The ratcheting westward lasted only a few seconds, but I felt the helplessness every human does when solid ground is no longer the truth.

My first thought was of the day before, when I had walked through the open marsh grasses at the site of Old Valdez. I could still see some of the streets and concrete foundations of the former town, not far from where I later pitched my tent.

During the Great Alaska Earthquake of March 1964, water-saturated soils beneath Old Valdez become more liquid than solid — they underwent liquefaction — during shaking that lasted for more than four minutes.

That earthly violence caused mountains of sediments beneath the ocean’s surface to slide to the depths. The moving soil shoved mountains of water out of the way, generating a great wave.

At least 30 feet high, the wall of water hit Old Valdez, rebounded off rocks across the port, and nailed the town again. Thirty-two people died there, the highest death toll for any town due to the magnitude 9.2 earthquake.

A few months later, geologists recommended that Valdez be rebuilt upon bedrock a few miles west near Mineral Creek. The townspeople agreed, and that is where Valdez sits today.

As for the earthquake I felt, my email subscription to Alaska Earthquake Center informed me it was a magnitude 4.1. The epicenter was 24 miles north of Valdez, about 15 miles underground, beneath a mountain divide.

I asked Geophysical Institute seismologist Carl Tape if he could describe the precise ratcheting I felt. He said the shocks were messier than that, “related to waves scattering all throughout this complex earth — and also traveling at different speeds.”

That release of energy from two stressed hunks of planet probably lasted just one second, he said. It was an instant that people in Valdez talked about as they met later that day.

On the trip to Valdez, as on other trips around Alaska in summer 2020, my windshield became crispy with insect carcasses.

Having read about a recent decrease of insects worldwide, I asked University of Alaska Museum of the North’s Derek Sikes: Judging from all the mosquitoes and gnats that drew our blood this summer, might Alaska be some kind of refuge for insects?

“North American insects are not showing signs of decline,” Sikes wrote back.

He attached a paper, published just a few days before in the journal Nature Ecology and Evolution.

In the study, a dozen scientists had looked at records of insect abundance at U.S. Long Term Ecological Research sites, including a few in Alaska.

The scientists found insect populations of North America were pretty much stable, and concluded with a sentence Alaskans might recall when we hear the whine of tiny wings.

“The apparent robustness of U.S. arthropod populations is reassuring.”