Look up, Alaska: The aurora is expected to be especially active this week 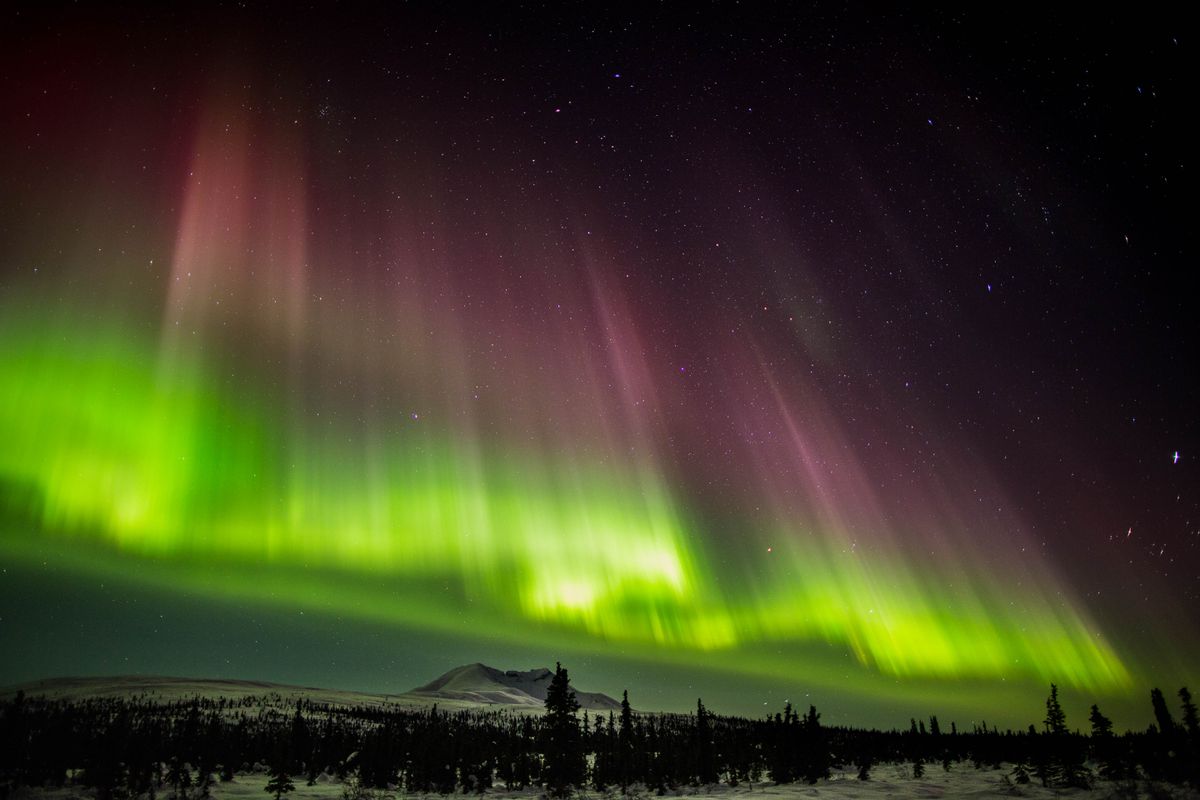 Seen from Gunsight Mountain near Eureka, a coronal mass ejection from the sun created stunning northern lights a few days later as the particles passed by Earth on March 16, 2013. (Loren Holmes / ADN)

Seen from Gunsight Mountain near Eureka, a coronal mass ejection from the sun created stunning northern lights a few days later as the particles passed by Earth on March 16, 2013. (Loren Holmes / ADN)

People across Alaska may have a chance to see an especially active aurora borealis this week.

The University of Alaska Fairbanks Geophysical Institute’s aurora forecast map shows that a wide swath of the state, stretching from as far north as Utqiagvik down to Kodiak, should have a shot at seeing the northern lights this week.

It’s important to have clear skies for viewing the lights, according to Don Hampton, research associate professor at the Geophysical Institute.

And luckily, for those in Southcentral Alaska, skies are likely to be clear on both Wednesday and Thursday nights before clouds roll in Friday, according to National Weather Service Anchorage meteorologist Tim Markle.

“It looks like that cloud cover will linger into the weekend, so it looks like tonight and tomorrow night will be our best chances for aurora viewing,” Markle said Wednesday.

The best aurora usually takes place between 11 p.m. and 2 a.m., Hampton said. There’s also a camera feed provided by the Geophysical Institute that shows the aurora in real time.

The aurora begins with the sun, Hampton said. Much like a cup of hot tea that gives off steam in the morning, the hot sun gives off a constant stream of particles, known as the solar wind. That wind moves fast, Hampton said — about 400 kilometers, or nearly 250 miles, per second.

And as the solar wind moves away from the sun, it interacts with the Earth’s magnetic field in certain places, which causes the aurora in the right conditions, Hampton said.

“If there was no solar wind, we would never have the aurora,” he said.

The aurora forecast tries to predict what the sun might do. Although the solar wind is swift, it can take three or four days to reach Earth, he said.

“We can’t guarantee it’s going to be good every night," Hampton said. “But I think for the next three nights, there’s a good chance we’re going to have a much better chance of seeing some pretty active aurora.”