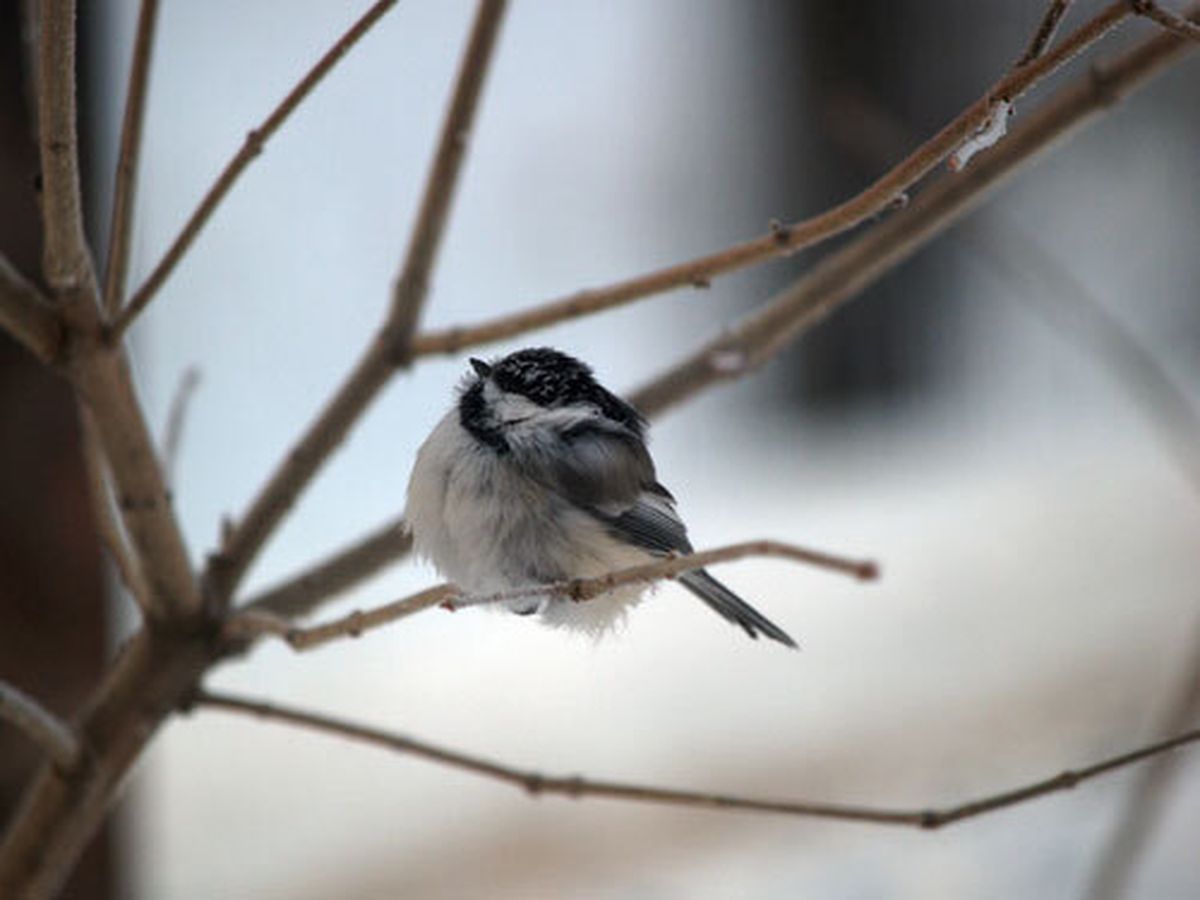 A black-capped chickadee on a cold Alaska day. (Photo by Jim DeWitt)

A black-capped chickadee on a cold Alaska day. (Photo by Jim DeWitt)

During the darkest days of Alaska’s winter, black-capped chickadees stuff themselves with enough seeds and frozen insects to survive 18-hour nights. Where the chickadees spend those long nights was a mystery until a biologist tracked them.

Susan Sharbaugh spent many winter nights trying to find out how a creature as light as a handful of paperclips survived temperatures of 40 degrees below zero. Sharbaugh is a biologist and a fan of the black-capped chickadee, one of the most unlikely residents of the north because of the difficulty of keeping a tiny body warm in a cold place.

In her studies, Sharbaugh found that black-capped chickadees gained an additional 10% of their body weight each day by stuffing themselves. The birds then use that fat to shiver all night, which keeps them warm. The human equivalent would be a 165-pound man who spent a frigid night outside and emerged 15 pounds lighter by the next morning.

Sharbaugh wondered where black-capped chickadees performed their amazing acts of nighttime survival until a company developed a radio transmitter tiny enough to ride on the bird’s back. Weighing 0.5 grams, the radio transmitter is about the size of an M&M, with a whip antenna approximately 5 inches long. Sharbaugh attached the transmitter to captured chickadees with two elastic loops that fit over their legs like a climbing harness.

“They ride really nicely,” Sharbaugh said. “You can’t even tell the transmitter’s there.”

After she first attached a transmitter to a chickadee at the University of Alaska Fairbanks campus in a study she performed about 20 years ago, Sharbaugh watched the bird disappear into the woods. She waited for darkness and hoped the evening would provide an answer to a question she had pondered for years: Where do chickadees spend the night?

People had told her about chickadees flying under the eaves of their homes at dusk. Sharbaugh had seen chickadees with bent tails at her feeder in the morning, which suggested they crammed their tiny bodies somewhere to escape the deep cold of the night.

When darkness fell on the night she attached the first transmitter, she ventured into the woods with former UAF biologist Tom Hahn, a receiver in an insulated bag, and an antenna that resembled a green ping-pong paddle.

Sharbaugh and Hahn followed the beeping signal to a birch tree with a broken top. They returned at twilight the next afternoon to see the chickadee diving into a hole on the tree the size of a quarter.

They had found a roost, a place where the chickadee wedged itself, puffed its feathers, turned its internal thermostat down 15 degrees Fahrenheit, and burned fat all night. Sharbaugh said chickadees could not survive without finding such a sanctuary.

“Finding a roost is just as critical, if not more critical, than finding food,” she said. “You have to find a good and an insulated place to spend the night when you’re that small.”

After discovering the first roost, she found the roosts of several other black-capped chickadees. Using diced peanuts as a lure, Sharbaugh recaptured the birds to remove their transmitters, which have a battery life of about three weeks.

All the roosts Sharbaugh found were in birch trees, and she has never seen more than one chickadee enter a roost. Other birds, such as bluebirds, survive the cold by huddling together, but that appears not to be the case for black-capped chickadees in the north. Roosting alone seems to fit their character, Sharbaugh said.

“They’re fairly aggressive towards each other,” she said. “It would be difficult for them to share a space.”

If chickadees around Fairbanks endure long winter nights in birch trees, the nighttime haunts of their relatives farther north — the Siberian willow tit of Russia’s Arctic and the gray-headed chickadee of Alaska’s Brooks Range — remain a mystery. Those tiny birds live in areas without large trees, and might roost in snow, Sharbaugh said.