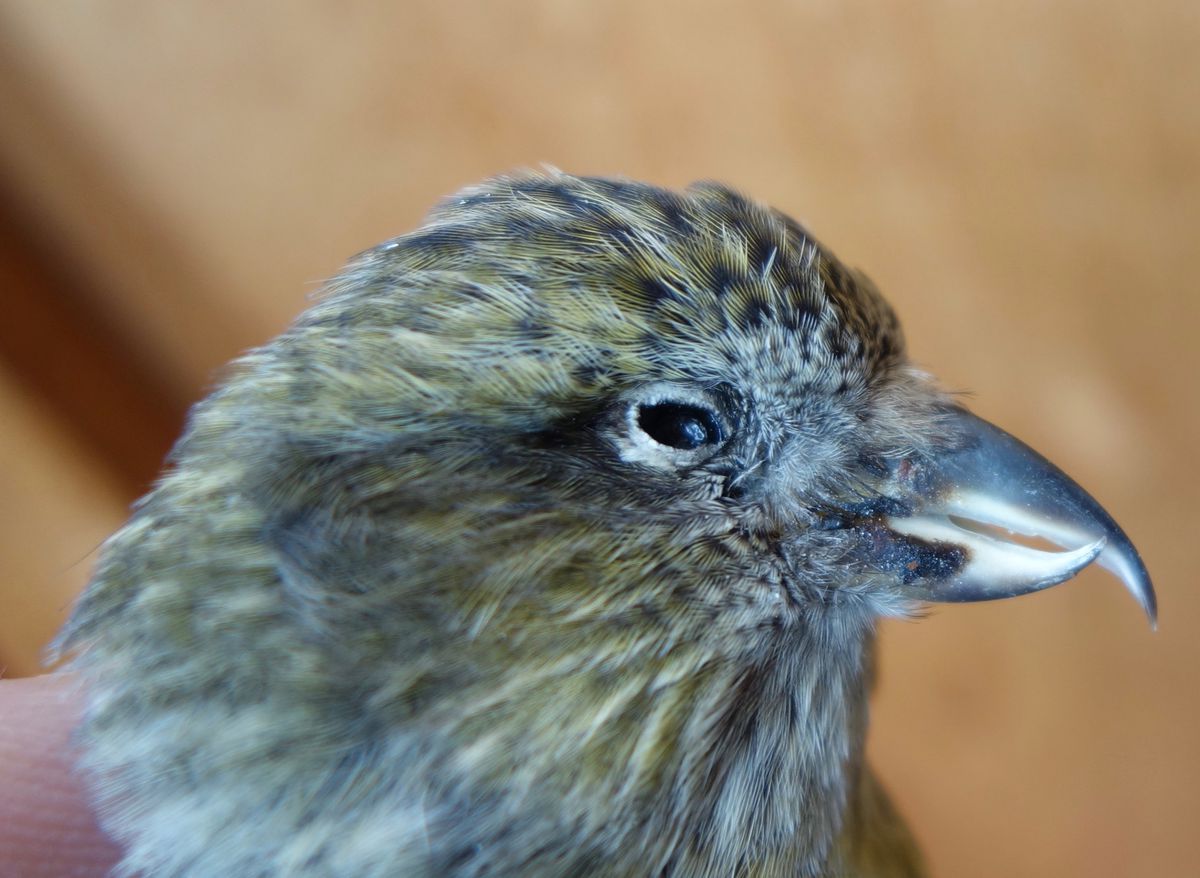 The beak of a female white-winged crossbill. This one died when it flew into a window. (Photo by Ned Rozell)

The beak of a female white-winged crossbill. This one died when it flew into a window. (Photo by Ned Rozell)

While out on a springtime snow trail, I recently saw a dozen white-winged crossbills pecking at snow on the side of the trail. When I reached the spot, I saw a yellow stain from where a team of dogs had paused.

Last spring, I saw a bunch of crossbills gathered near an outhouse. They were congregated at a communal pee spot in the snow. The birds were poking at it.

Why might songbirds have a thing for yellow snow?

I put that question up on a forum used by bird lovers who live here in the boreal forest — the immense swath of spruce, birch, aspen, poplar and willow that stretches from the shores of the Bering Sea to the coast of the Atlantic Ocean.

Those birders had some answers, but first a little more on white-winged crossbills. A little smaller than robins, male crossbills add color to our winters with their pink/red feathers. Females have yellow/green feathers. Both have white bars on their wings.

Crossbills spend the entire winter in the far north but often move long distances until they find a good crop of their favorite winter food, the seeds of white spruce trees.

White-winged crossbills have a beak that resembles a pair of crossed fingers. The two dagger-like mandibles allow crossbills to reach into the scales of spruce cones and hinge out the winged seeds. They shuck the meat of the seed while turning the cone like a corn cob. According to scientists at the Cornell Lab of Ornithology, a single crossbill can eat 3,000 spruce seeds in a day.

With all that bland tree-fruit in its diet, perhaps the crossbill craves something it can’t get from spruce trees. On the bird forum, Fairbanks resident Sarah Keller responded to my question about the possible appeal of yellow snow:

“There are potentially valuable ‘salts’ in urine, including nitrogen, sodium, potassium and phosphorus,” she wrote.

Others on the forum shared Keller’s opinion that the crossbills are getting mineral value for their efforts of seeking out yellow snow.

Mammals like us have a urinary system that consists, in part, of two kidneys. Via urine, our kidneys remove extra water, salt and urea, formed when our bodies break down protein.

In her master’s thesis at Western Michigan University in 1980, “An Analysis of Salt Eating in Birds,” Kathryn Herson cited several observations by other scientists, like this one is from a 1941 publication:

“The birds were greatly attracted to dog urine in the snow in the winter months in Michigan.”

Herson theorized that the low-sodium seeds eaten by many wild birds may give them a hankering for salt.

Birds’ sodium needs also go up during breeding season because females use sodium in egg formation. Breeding season could be anytime for white-winged crossbills, even deep, dark winter. Scientists have noted crossbills on nests during every month of the year. All they seem to need are trees filled with spruce seeds, which maybe could use a little seasoning.