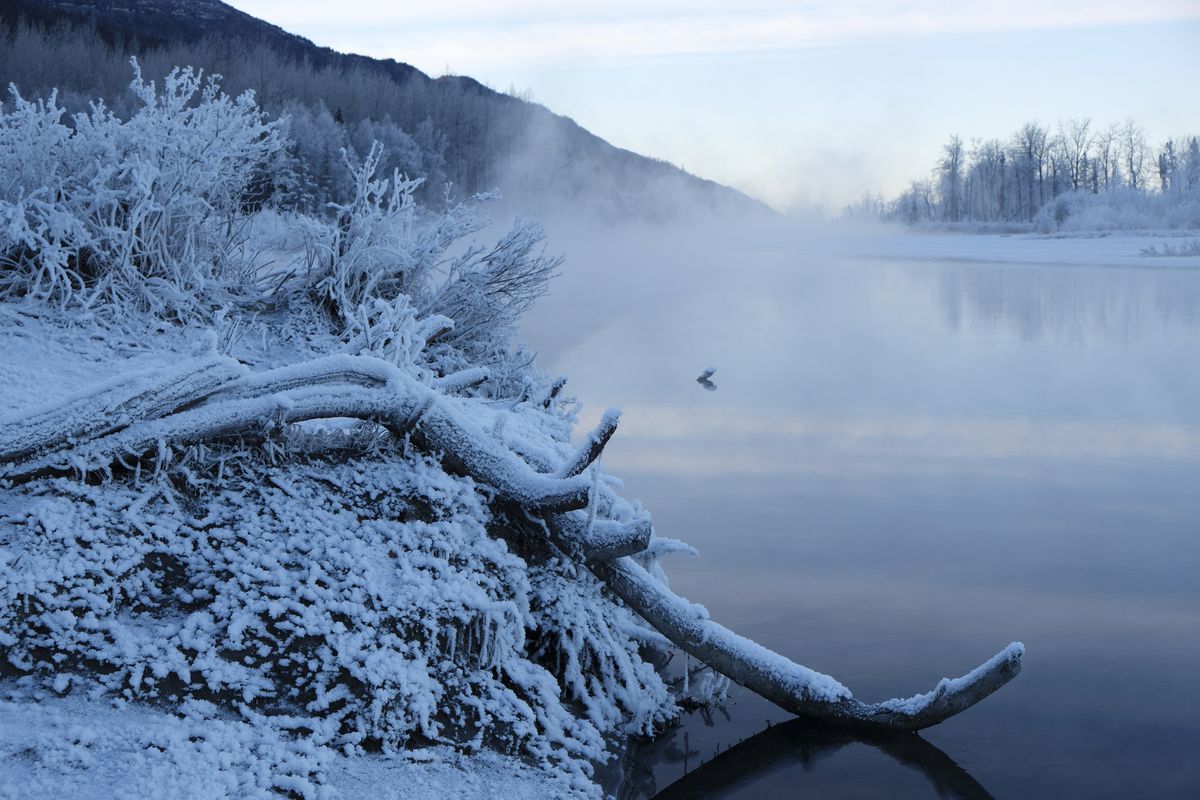 Frost clings to bushes and trees along Eklutna Tailrace on Old Glenn Highway near Palmer. The area saw mostly clear skies and temperatures around zero degrees for much of Tuesday. (Marc Lester / Alaska Dispatch News)

Frost clings to bushes and trees along Eklutna Tailrace on Old Glenn Highway near Palmer. The area saw mostly clear skies and temperatures around zero degrees for much of Tuesday. (Marc Lester / Alaska Dispatch News)

A cold snap is chilling Alaskans statewide, dropping the temperatures to well below normal, a trend forecasters expect to last about another week.

The National Weather Service announced the arrival of winter temperatures in a string of social media posts since the beginning of the week. It noted, however, that nearly all of Alaska is cooler than usual for this time of year.

Anchorage saw a high temperature of 8 degrees and a low, recorded at midnight, of 2 degrees on Wednesday. The normal high temperature for Nov. 30 in the city is 25 degrees, said Anchorage-based weather service forecaster Matthew Clay.

"That right there tells you it's pretty cold outside compared to what we're usually used to," Clay said.

Also of note for the Anchorage area, snowfall is predicted to begin Wednesday night and continue off and on through Thursday afternoon, possibly bringing 1 to 3 inches of snow.

The double-digit differences from the normal high and low temperatures are also being recorded in all other regions of the state.

Fairbanks' low temperature on Wednesday was minus-26 degrees, 17 degrees below the average low of minus-9, according to the weather service. A day earlier, a warmer but still bone-chilling low of minus-21 ended a 658-day stretch of highs above minus-10.

Bethel and other Alaska Peninsula communities have been hit the hardest.

"Bethel's high was minus-13 degrees. The normal high is 20 degrees, which puts them 33 degrees below normal," Clay said.

The southwestern hub is experiencing lower than normal temperatures like the rest of the state, but wind gusts of up to 40 mph make it feel minus-30 to minus-45 degrees outside.

Michael Riley, with Bethel Search and Rescue, said the community hasn't experienced weather so harsh for at least two winters.

"The temperatures, like minus-14, aren't that bad, but the wind makes it extremely cold and very dangerous for everyone outside," Riley said. "We haven't seen this type of weather for quite some time and people don't appear to be as well-acquainted with it anymore."

Residents are having to readjust from the previous, mild winter, Riley said. People got used to not plugging their cars in, or having to restock on home heating fuel as often, he said.

Riley also works for a heating fuel delivery company, and he said the extremes in weather over several years have contributed to fluctuations in the frequency that residents check their fuel levels.

Search and rescue has not been deployed during this cold snap. Riley hopes it stays that way and people take precautions.

"We're hoping everyone sees the danger with the wind chill and decides to stay in at night. It's better than putting yourself in jeopardy," he said.

Naim Shabani, owner and operator of Kusko Cab, said it's typical to hear two opposing arguments about the extreme weather.

"A lot of folks were waiting for this to come back and there's been a sigh of relief that they finally have winter again, but others consider it a bit of a nuisance since there was some complacency about less winter preparation when compared to the past," Shabani said.

He said he witnessed the cold catch some residents off guard. Some failed to winterize their vehicles; there are a lot less pedestrians on the streets in a town where almost everything is within walking distance, weather permitting, he said.

The weather service warned of increased risk of hypothermia and frostbite in a Wednesday wind chill advisory for the Kuskokwim Delta.

Statewide, the below normal temperatures will stick around for another seven to 10 days, said Clay.

According to the forecaster, a cold air mass originating from the Arctic is covering the state. The upper levels of the atmosphere are favorable for allowing cold air to drop south across the state, he said.

"Last year, the jet stream was pointed more north to south, which was bringing up warmer air from the north Pacific," Clay said. "That jet stream is more west to east now, keeping cold air father north and warmer air to the south. We're stuck in a continued cold air feed from the Arctic."

Temperatures are projected to begin gradually rising by mid-December, he said.