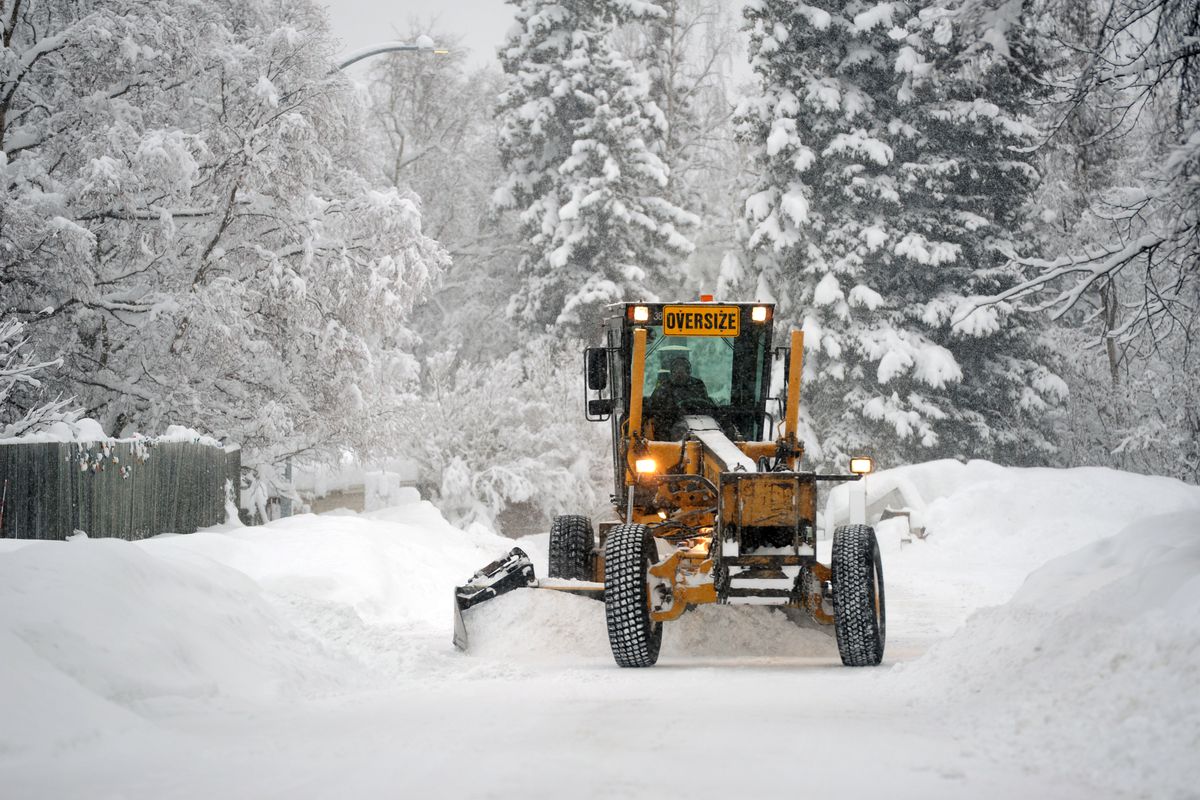 A light snowfall totaling about an inch and a half fell on Anchorage on Monday as residents dug themselves out of the weekend's foot-deep accumulation of the white stuff. The heavy snowfall also left other Southcentral Alaska communities like Seward and Moose Pass with more than 30 inches of snow.

The National Weather Service's Anchorage office reported that Anchorage's winter of 2016-17 already has the heaviest total snowfall of its last two winters.

Rebecca Duell, a meteorologist at the weather service's Anchorage office, said Saturday's snowfall of 10.3 inches, recorded at Ted Stevens Anchorage International Airport, was only the 18th heaviest day for snowfall since record-keeping there began in 1953.

[Photos: An ever deeper blanket of snow in Anchorage]

Duell said snowfall across Anchorage for the weekend was relatively uniform at about 13 inches, with few areas getting significantly more or less than that number.

On Monday, 1.1 inches of snow was measured at the weather service's Sand Lake office as of 3 p.m., said meteorologist Bob Clay. Another half-inch may have fallen as the snowfall tapered off in the late afternoon, he said.

Monday's accumulation brings the winter's overall snowfall for the city so far to 45.7 inches — less than an inch below Anchorage's norm of 46.4 inches by Jan. 23. Snowfall for the month has been exceptionally heavy, officials said. Snowfall just for this month reached an estimated 24.9 inches.

Temperatures in the Anchorage area were expected to exceed 20 degrees Monday for the first time in more than a week due to a low-pressure system currently in the Bering Sea, moving east across the Gulf of Alaska.

Clay said temperatures at higher elevations climbed. Potter Valley recorded a high of 29 degrees while the Glen Alps area warmed up to a high of 27, he said. Anchorage's lower elevations reached the high teens.

"The lower elevations had colder air holding in place, but it was still significantly higher than the past week," Clay said.

On the Kenai Peninsula, Seward issued a local emergency declaration over the weekend, and the city council unanimously voted in favor of a resolution during a special city council meeting Monday that requests help from the state with the extreme weather affecting the town, according to Seward city clerk Johanna Kinney.

Kenai Peninsula Borough Mayor Mike Navarre must declare an emergency exists before the request for aid moves to the state's governor for approval.

According to the resolution, 2 1/2 feet of snow fell by Saturday morning.

"Costs associated with this event are unexpected and unbudgeted," the resolution says.

Clay said the snow sensors in Seward and nearby Exit Glacier did not record additional snowfall Monday, but light snowfall was reported and may have totaled 2 inches.

Kinney said it snowed intermittently there throughout the day.

Kinney said the city lacks the finances and resources to get ahead of the snowfall, which is forecast to continue through the week. A mix of rain and snow is expected on Wednesday and Thursday, as well.

"Traditionally, we get a lot of snow and then rain, and then the conditions get really bad," she said. "It switches from snow removal to road preservation and sanding, things like that. It's a big effort for our town when it's that much snow all at once."

There were no reports of injuries or damaged structures in Seward, Kinney said. The local chatter centered on people needing help digging out and clearing roofs, she said.

The weather service also issued an advisory for blowing snow in Portage Valley and Turnagain Pass until 6 a.m. Tuesday. Winds of up to 50 mph and visibility of a half-mile or less. Commuters are cautioned to use care in the area.

Snow and rain is expected to stay in the forecast for the region over the next several days, Clay said.

Coastal areas will likely get rain while interior parts of Southcentral will experience a mixture of precipitation and snow, he said. In the Anchorage bowl, that mixture is forecast for Wednesday, and then Thursday the area should see snow.