Almost 50 degrees in Anchorage. In January. What’s going on? 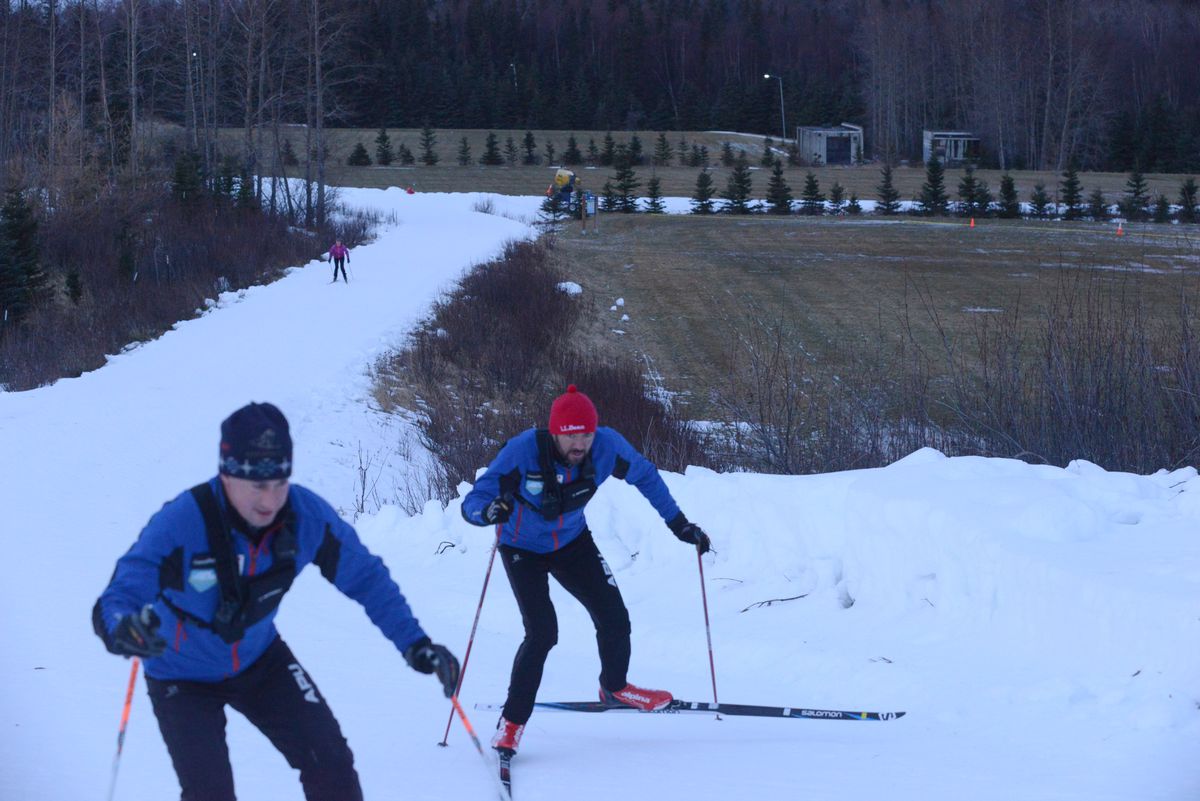 Here was the take-home message Tuesday from Joey Caterinichio, whose job it is to keep the cross-country skiing national championships this week from literally and figuratively melting down: "Thank God for snowmaking."

Residents of Anchorage awoke Tuesday to temperatures in the forties, which ultimately tied the record of 44 at the National Weather Service office in Sand Lake. Birchwood, halfway between Anchorage and Wasilla, hit 51, exceeding Tuesday's highs in places like Atlanta, Chicago and Houston, Texas.

The warmth and Anchorage's lack of natural snow have complicated life for Caterinichio and the hundreds of athletes, coaches and volunteers involved in the championships here, which will help determine who represents the U.S. at next month's Winter Olympics in South Korea.

But all of them seemed to be forging ahead undeterred Tuesday, even as the high temperatures and a steady wind helped to melt the hillsides at Kincaid Park, the site of the championships, down to bare ground.

The parking lots could have doubled as ice skating rinks; the man-made snow on the trails varied in texture between inches-deep mashed potatoes and nearly solid ice. But skiers did their tune-up workouts, coaches tested skis and wax and volunteers plotted out parking in advance of the first event — a distance race Wednesday.

Athletes will be racing on a 2.5-kilometer loop packed with artificial snow, rather than the 7.5-kilometer course organizers had originally planned. But they've still managed to cram in four hills per lap, and 1,000 total feet of climbing for the women and 1,450 for the men.

"The weather will do what the weather does. You can't control that. You can just control how you react to it, said Brian Gregg, an Olympian from Minnesota and University of Alaska Anchorage graduate who's racing this week.

One, a low over Southwest Alaska, is spinning counterclockwise, Kutz said. The other, a high over the Pacific Northwest, is spinning clockwise. Picture that in your head and you can see how the two combine to essentially pull warm air from the North Pacific Ocean up to Alaska.

The warmth is amplified, Kutz said, as the air pushes over the mountains surrounding Anchorage, then falls back down — what meteorologists refer to as a "pseudo-adiabatic process."

"The physical process of pushing it back down dries it out and warms it up," Kutz said.

Anchorage temperatures were forecast to quickly drop back down to below average after Tuesday, Kutz said. But across Alaska, residents are still feeling the effects of unusual warmth.

Over the weekend, a Bethel man died after his snowmachine fell into a marked, open hole on the ice on the Kuskokwim River. Bethel's average temperature between October and December was the highest on record, according to the National Weather Service.

"The holes are just not freezing. It's not a normal year," Mike Riley, president of Bethel Search and Rescue, said in a phone interview. "We're getting reports that it's not just this river — it's all over the state."

In Utqiaġvik, on the North Slope, the average temperature during the same period was 15.6 degrees, 12.2 degrees above normal.

Anchorage has seen 10 inches of snow this winter, or less than one-third of the normal total, said Kutz.

Gregg, the skier, said it was "astonishing" to compare Kincaid Park to his last trip last there, in April.

"It's like bare grass everywhere that isn't a ski trail," he said.

But the ski championships' organizers were able to stockpile artificial snow through Christmas Day during 10 days of cold weather, said Caterinichio, the event's chair.

They used 4.3 million gallons of water, the same amount that would fit in six-and-a-half Olympic-size swimming pools. Major cross-country ski championships are now expected to be able to produce their own snow, Caterinichio said.

Things are still better than in 2009, she added, when one of the longest cold snaps in Anchorage history forced officials to cancel races. Some athletes got frostbite when the races did go off.

"This, I feel like, we have a little more control over, because we've already done our homework," Caterinichio said. "The snow depth is good; it's supposed to cool off. I think we'll be set for the rest of the week."