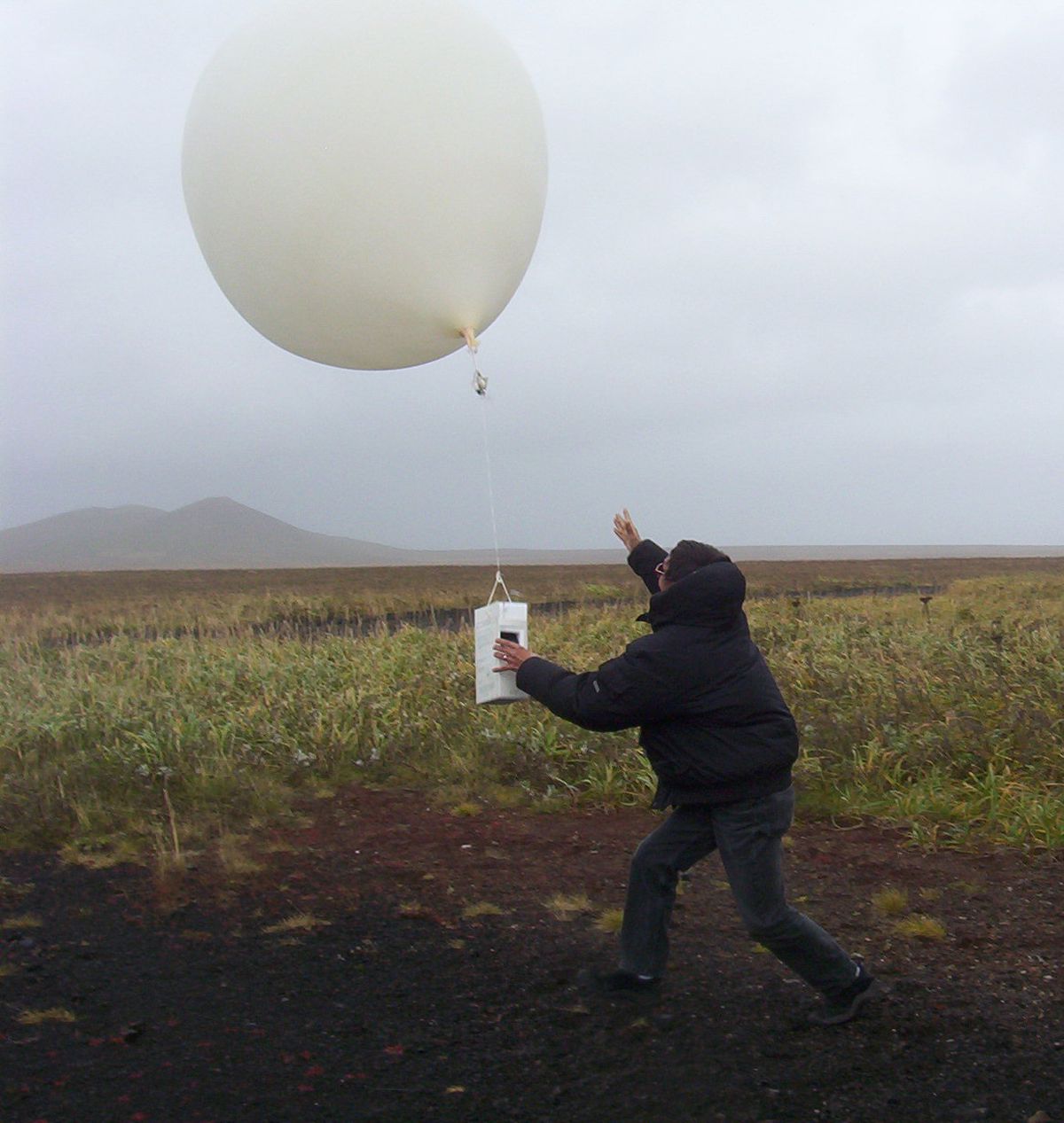 The National Weather Service said it will eventually save money and argues that no employees will be lost. Employee advocates say the technology misses out on key human observations that are important to national weather forecasting and Alaskan flight planning, and that the administration is being disingenuous about the jobs they are taking away from Alaskans.

The National Weather Service plans to install the Finnish "Autosonde" stations to release weather balloons and collect data, beginning in the Southeast community of Annette next month, and ending with eight communities later in Nome, in August 2019. Each costs roughly $1.2 million to install.

Traditionally, weather balloons have been launched by humans from the rural and sometimes remote weather stations manned 24 hours, seven days a week by three staffers each.

Alaska's National Weather Service forecast stations have been short-staffed for years, at rates higher than is common nationally. The weather service said it is difficult to fill the positions. The employees' union said the posts remained unfilled on purpose. And last year the agency started pilot testing automating human jobs in Alaska with technology that releases weather balloons multiple times a day.

The NWS decided the test in Kodiak was a resounding success: "effective, efficient and resilient," according to National Weather Service Acting Director of Public Affairs Susan Buchanan. Autolaunchers are scheduled to be installed at weather stations in Annette, Yakutat, St. Paul, Bethel, King Salmon, McGrath, Kotzebue, Cold Bay and Nome.

The efforts to downsize the NWS comes as President Donald Trump's fiscal year 2019 budget request also suggests consolidating the NWS Tsunami Warning Center in Palmer and a second facility in Hawaii. The budget is not clear how the two would be combined, but an employee advocate said that for years there has been internal agency talk of moving the centers to College Park, Maryland, just outside Washington, D.C.

The lack of staffing and request to eliminate or consolidate and move one or both of the Tsunami Warning Centers grabbed the attention of the congressional delegations from Alaska and Hawaii. They sent a letter in March to Commerce Secretary Wilbur Ross raising concerns about the issues in March.

Cutting these positions matters to Alaska and the rest of the country because reliability of weather forecasts "is seriously in question" if the data isn't right coming out of Alaska, said said Richard Hirn, general counsel for the National Weather Service Employees Organization. If the information isn't reliable in Alaska, it deteriorates the weather models downstream, he said.

Given the increase in strength from storms, along with "monumental paradigm shifts due to warming weather," forecasting is more important than ever, the lawmakers wrote. They expressed "serious concern about the hundreds of operational vacancies that remain unfilled," and the administration's plans to decrease Weather Service Office, or WSO, coverage.

"This is simply unacceptable," the letter said. "Many of these NWS operational positions directly support public safety and should be filled by permanent, full-time scientists, forecasters, technicians, and support personnel."

Instead, the lawmakers wrote, the NWS Alaska Region has been steadily reducing hours and services at its 12 rural weather stations since 2009, culminating in a 30 percent staffing shortage by 2016. "The NWS now plans to close all remaining Alaska WSOs in the near future," they wrote. That means that the three Alaska Weather Forecast Offices "forecast for an area approximately the size of 10 WFOs in the Lower 48 states, while having little to no increase in staffing. Instead, there has been an operational staffing shortage at Alaska WFOs of 20 to 30 percent for more than a year, due to positions intentionally being left unfilled."

There were 12 weather service offices until May 2016, when the NWS closed the Valdez office and reassigned its vacant meteorologist position to the Weather Forecast Office Anchorage.

"We ask you to take action now to fill these operational vacancies, reevaluate the current plan to eliminate valuable positions in our rural communities, and provide American taxpayers the forecasts and warnings that they depend upon to carry out their daily lives," the lawmakers wrote.

Alaska Sen. Dan Sullivan is the chair of the subcommittee in charge of NOAA and the weather service. A spokesman in his office did not respond to questions about whether a hearing is warranted.

But the NWS appears to be going in another direction.

A Commerce Department spokesperson, who declined to comment if his name was used, said that the letter was received and is under review.

"If Senator (Ted) Stevens (R-Alaska) was still there there would be no way this would be happening," said Richard Hirn, general counsel for the National Weather Service Employees Organization.

NWS's Buchanan defended the decision to move to the autolaunchers, saying that the equipment would offer NWS Alaska a total savings close to $1 million a year, or $20 million over the 20-year life of the equipment. That savings "comes from a number of places, but none having to do with staff or salary reductions," Buchanan said.

The autolaunchers, which cost about $1.2 million to install, not including upkeep, are not paid for by taxpayer money. They are instead "funded under a program that auctioned off government-held frequency spectrum to the private sector," Buchanan said. "Therefore, the purchase and installation of these systems to move to the new spectrum is coming at no cost to taxpayers, and is funded completely by the sale of spectrum."

Those annual cost savings come because the NWS currently spends a lot of money sending people on temporary assignments where it is difficult to "fill and retain employees due to the remote nature of these locations." It would no longer be necessary to fund travel, meals and lodging, she said. In other cases, keeping one part-time staffer instead of three full-time staffers would allow for downsizing "footprint of some offices and co-locate with other government agencies where possible, thus saving rental and associated maintenance costs."

Moreover, the "employees would be retrained and move duty stations to perform their new jobs. No one would be downgraded," Buchanan said.

Employee advocates rejected several of those assertions. They said the positions could be filled, but the NWS is actively trying to prevent that. And they say that some employees have been told they must move their families far away or lose their jobs.

Jim Brader, a forecaster in Fairbanks, is the Alaska region chair for National Weather Service Employees Organization. The NWS has notified him that "they intend to reduce staffing at all the remote offices to one and eventually close all of them," he said. "One of our beefs is this is outsourcing this to a Finnish company that produces this," and installation costs $1.2 million each, he said.

There are 33 vacancies in Alaska, not only at the remote offices but at three major weather stations in the state. "We are trying to fill them, and have more than a dozen active hiring actions underway now," Buchanan said. "About half of these vacancies are in geographically isolated areas at the GS-7 pay grade, which makes it very difficult to recruit and retain employees for these jobs."

There were 36 vacancies in April 2017, Buchanan said at the time.

Hirn has been seeking information on the weather balloon launches for years. Last year he filed a Freedom of Information Act request to find out how much the NWS spent on the autolauncher for the Kodiak pilot. It was more than $900,000.

"It's not clear how long it's going to take … to recover the initial cost. But obviously three guys don't make a million dollars," he said. He said most of the weather office employees are at a "GS-10" on the government pay-scale. A GS-10 makes between $61,830 and $80,380 in Alaska, according to the Office of Personnel Management.

But "here's the game they're playing," Hirn said. When there's a vacancy for a job that was a GS-10, "they bid them at a GS-5 and 7, and they are saying they're only temporary positions."

"So nobody wants to move to Barrow, Alaska for a GS-5 or 7 job that's only going to be for a year. And they say, 'we have to automate because nobody wants the job.'"

The pilot program autolauncher system in Kodiak went into full operation in October. "Now that we have been able to demonstrate that autolaunchers are efficient, effective, and resilient, we'll be rolling them out across Alaska throughout the rest of this year, in Fairbanks, Annette, Yakutat, Barrow, St. Paul and Bethel. Autolaunchers will be deployed in Anchorage and the final five Alaskan weather service offices in 2019," Buchanan said.

"The automation … will replace probably like 30 people," Hirn said.

Hirn and Brader say that they are concerned that Alaska is losing more than just jobs, but information and skills that come with having employees in those rural weather stations.

For years the NWS has been "gradually taking duties away" from the employees, Hirn said. They have eliminated radio broadcasts and balloon launches that require staff to handle. The state is among the highest nationally in NWS vacancies, he said.

"Those people are the eyes and ears on the ground for the weather service," Brader said. While there are benefits to automation, he said, there are also downsides. The weather service employees are able to augment the data where machines get it wrong, he said.

On occasion, machines will "say it's snowing when it's clear." That can change whether a plane takes off and lands in a remote location — key where there may only be one or two coming to a town in a week.

And upper-air balloon tests don't identify ground blizzards with no falling snow, which can still be hazardous conditions for hunters and oil workers on the North Slope, Brader said. When conditions are rough, a local employee can get information from the NWS for local residents or the Coast Guard, he said.

One of the services cut in recent years has been VHF radio services at the weather service offices in rural areas. When people go hunting and whaling, they take a VHF radio along, Brader said. The contact is helpful for warning of new weather conditions. But the weather service "removed all of that equipment in the Fall of 2017," he said.

The service discontinued sea ice and sea surf observations in Utqiaġvik in November 2017, he said. Brader said he finds that "troubling" given recent changes, such as open water and waves this December. The automated equipment doesn't measure snowfall each day — in places where there are a 100 years of records, they will continue no more, he said.

"We were told in October 2016 in an 'all hands' meeting by the national headquarters that no one would lose a job and no one would have to move," Brader said. "If jobs were changed it would be done through attrition. That has been reneged on."

In the most recent ominbus spending bill, Alaska Sen. Lisa Murkowski secured "report language" — a request not legally required — that asks for a report within 60 days from NWS "on staffing cuts in Alaska and how NWS plans to maintain or improve forecasting and communications around the state, especially in remote areas."