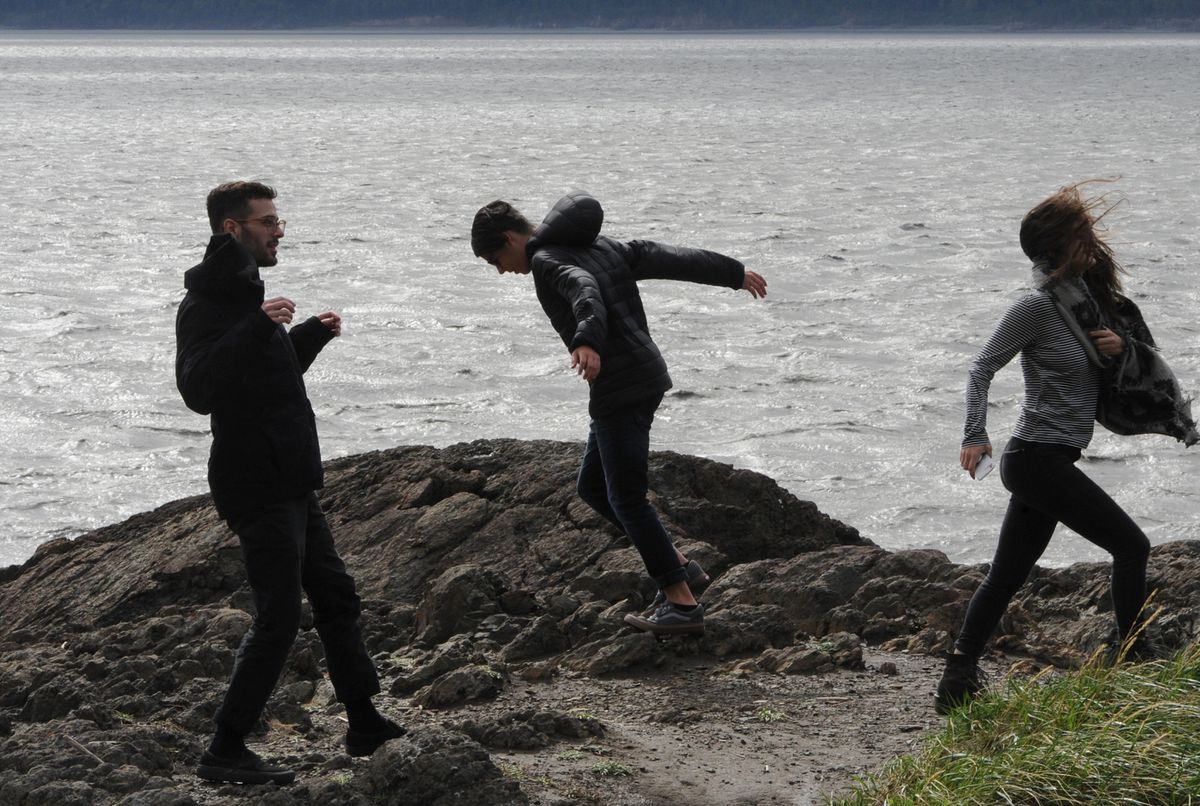 Tourists stopped and experienced the strong winds at Beluga Point along the Turnagain Arm while taking a bus to Seward on Sunday, August 12, 2018. (Bill Roth / ADN)

Tourists stopped and experienced the strong winds at Beluga Point along the Turnagain Arm while taking a bus to Seward on Sunday, August 12, 2018. (Bill Roth / ADN)

Strong winds spawned by a former typhoon ripped through Southcentral Alaska on Sunday afternoon, sparking power outages in Anchorage and continued warnings from weather officials of flooding rivers and lakes.

"We still have some pretty significant weather occurring over the next 24 hours until things start to ratchet down," said Michael Kutz, a meteorologist with the National Weather Service in Anchorage, on Sunday afternoon.

Powerful bursts of wind sliced through the Anchorage Hillside and higher elevations along Turnagain Arm Sunday afternoon. Gusts of 75 mph were clocked in the McHugh Creek area and in the upper DeArmoun Road area.

There was a spell of sunshine in Anchorage on Sunday afternoon, but that was temporary, with more clouds and rain coming, he said.

The wind made launching the weather balloon from the agency's West Anchorage building a trial, said Kutz.

"When you walk outside it beats you up like a boxer on a timing bag," he said.

"We have one crew working and are in the process of calling in more crews," the company said.

"We don't know for sure, but we believe the cause was wind-related," she said.

The weather is the product of former Typhoon Shanshan that brushed along the coast of Japan earlier this week — but didn't make landfall — before moving farther northeast into the Pacific.

The impacts were being felt across Southcentral, Kutz said.

Cordova saw more than an inch of rain in about 16 hours on Sunday, he said. A lake blocked by Bear Glacier in Kenai Fjords National Park near Seward was filling with water, possibly creating conditions for a large release.

"The water levels are high and they will continue to be high through later tonight and eventually start draining," he said.

Rain and gusty winds were expected to continue in Cook Inlet and the Susitna Valley to early Monday morning, Kutz said.

The rainfall is expected to raise water levels in rivers and streams, with streams coming out of the Talkeetna Mountains in the Susitna Valley of greatest concern.

"These area streams will likely approach bankfull conditions by Sunday night and continue into Monday or Tuesday," the weather service said in a special weather statement.

"Persons traveling or recreating in the area are urged to remain alert for rising water levels, potential flooding, and iceberg movement over the next few days," the weather service said.