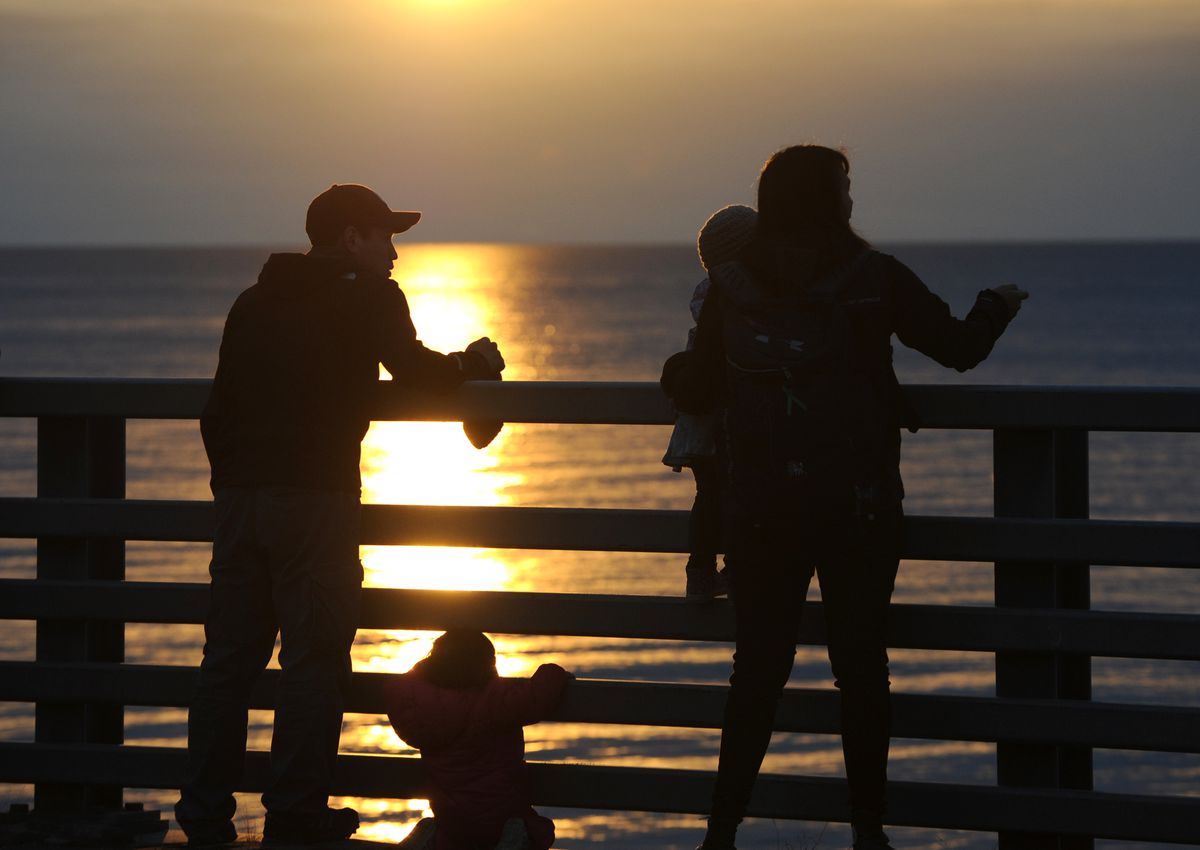 Wayne Johnson and his fiancé Catherine Ivanoff view the sunset with their children Lilly, 1, and Rosa, 3, in Kotzebue on Monday, Sept. 17, 2018. (Bill Roth / ADN)

Wayne Johnson and his fiancé Catherine Ivanoff view the sunset with their children Lilly, 1, and Rosa, 3, in Kotzebue on Monday, Sept. 17, 2018. (Bill Roth / ADN)

A stunning shortage of Bering Sea ice in spring and record warmth in autumn marked what scientists say will be one of the warmest years recorded in Alaska, raising questions about everything from the future of commercial fishing to new agricultural opportunities.

Alaska’s most “extreme” 2018 climate event was the lack of Bering Sea ice, growing only to half its previous lowest size, in 2001, said Rick Thoman, a climatologist with the University of Alaska Fairbanks.

That had consequences in Western Alaska coastal communities, causing winter flooding in villages usually ringed by protective sea ice, and raising risks for people hunting on iffy ice, or by boat instead of snowmachines.

“It is absolutely unprecedented,” said Thoman. “We’ve seen nothing like it" in records extending from modern satellite data back to whalers' logs in the 1800s.

The limited ice, coupled with high sea surface temperatures and a mildly warm atmosphere, ensured that 2018 will be one of the five warmest years in Alaska history. The state averaged about 30.1 degrees statewide, Thoman said, based on a preliminary estimate.

It will mean the four warmest years in the state have been recorded in the last five years, with 2002 being the only outlier, he said. 2016 was the warmest-ever year for Alaska, at 31.9 degrees, based on records back to 1925.

Climate change “is the canvas that all this is being painted on,” he said.

Some of the country’s most rapid changes due to a warming climate are happening in Alaska, the nation’s only Arctic state, the Fourth National Climate Assessment report reported in November. Fixing Alaska’s climate-related damage could cost $110 million to $270 million a year, it estimated.

[Alaska experiencing some of the most extreme climate change in the U.S. says new report]

“That’s the million-dollar question,” he said. “So we have southern Bering Sea fish in the northern Bering Sea. So what happens when we get cold water again? Will it kill those fish in one year? Do they get trapped?"

Brandon Ahmasuk, subsistence resources program director at Kawerak in Nome, said the dramatic changes in the Arctic raise questions about the food web.

Whales and walrus that people eat now migrate past the Seward Peninsula in December, two months later than they once did.

Seabirds people rely on for food are still showing up dead in the region, a problem in recent years. Test results show they’re starving, generating questions about whether an influx of fish from the south, such as Pacific cod, are eating their ocean food.

People worry the valuable pollock fishery that provides food worldwide could be threatened if the fish move too far north, he said.

“On the surface, some people might say, ‘So what, who cares (about climate change)?’ ” he said. “But it might mean a major food crash in one area, and that forces people to get their food from somewhere else.”

A plus side to warmer temperatures could come agriculturally, with longer growing seasons when temperatures stay above freezing.

Julie McWilliams, a teacher in Bethel, operates a small experimental farm and has plans to introduce more agricultural skills and dietary choices to the region.

She said the seasons have changed rapidly in recent years.

The outdoor growing season used to end around early September. Now it lasts until October. In November, she was still picking fresh kale from her garden.

Farmers, using high tunnels to extend growing seasons, are producing strawberries and tomatoes — crops that had not previously grown there.

“I think we’re in for (more) major changes here in the next few years,” she said.

“It’s really unusual for the whole state to be warm,” he said. “And not just warm, but near-record warm, from Kotzebue to the Panhandle.”

For the first time, Kotzebue’s fall temperatures, from September through November, averaged above freezing, he said. The Northwest Alaska town above the Arctic Circle averaged 33.7 degrees (8.5 degrees above normal) during that stretch.

Anchorage saw record autumn warmth, too, at 43.3 degrees. That’s more than 1 degree higher than the previous record in 1979 (and more than 8 degrees above normal).

Fairbanks recorded the latest arrival of snow in fall, on Oct. 20.

The statewide fall temperature averaged 32.4 degrees, the second highest on record, below 32.9 set in 2002.

Thoman said he’s been working hard to find highlights for cold temperatures. “But there’s really no noticeable cold to report,” he said.

The year’s coldest temperature recorded in an Alaska community was “pathetic," he said. That was the 54 below recorded in Chicken on Jan. 10 and 11. It’s well above the state’s annual average lowest temperature of minus 65, as measured since 1950.

From the ghost of cold snaps past, your annual reminder of what has been and what might (but probably won't) be yet to come. For the long-term climate sites, there have been no all-time record lows set since January 1989. #Arctic #akwx @Climatologist49 pic.twitter.com/rugi4RKO9w

Alaska climate sites -- locations with records dating back to at least the 1940s -- haven’t recorded an all-time record low since January 1989, he said.

This year, a record-high for Alaska was set for January. That happened when Ketchikan reached 67 degrees on Jan. 14, higher than the Southeast town’s average summer temperatures, he said. That beat the previous January high in Alaska by four degrees, previously set in multiple communities.

There is perhaps one brightening spot for cold lovers. Bering Sea ice so far this winter extends across a near-normal range, a sharp departure from last year, with the ice reaching down to Southwest Alaska.

This fall, warm storms from the south are generally barreling toward Southeast Alaska, rather than up the Bering Sea, where they shredded sea ice earlier in the year, he said.

“The sea ice is 89 percent of normal,” Thoman said.

The thickness of the ice is another matter. The sea ice arrived late in recent weeks off the coast of Nome, but it’s thin compared to previous years, often 4 or 5 inches thick, Ahmasuk said.

The official average temperature in Alaska for 2018 won’t be reported until after the partial government shutdown ends, when the National Centers for Environmental Information resumes operation, Thoman said.