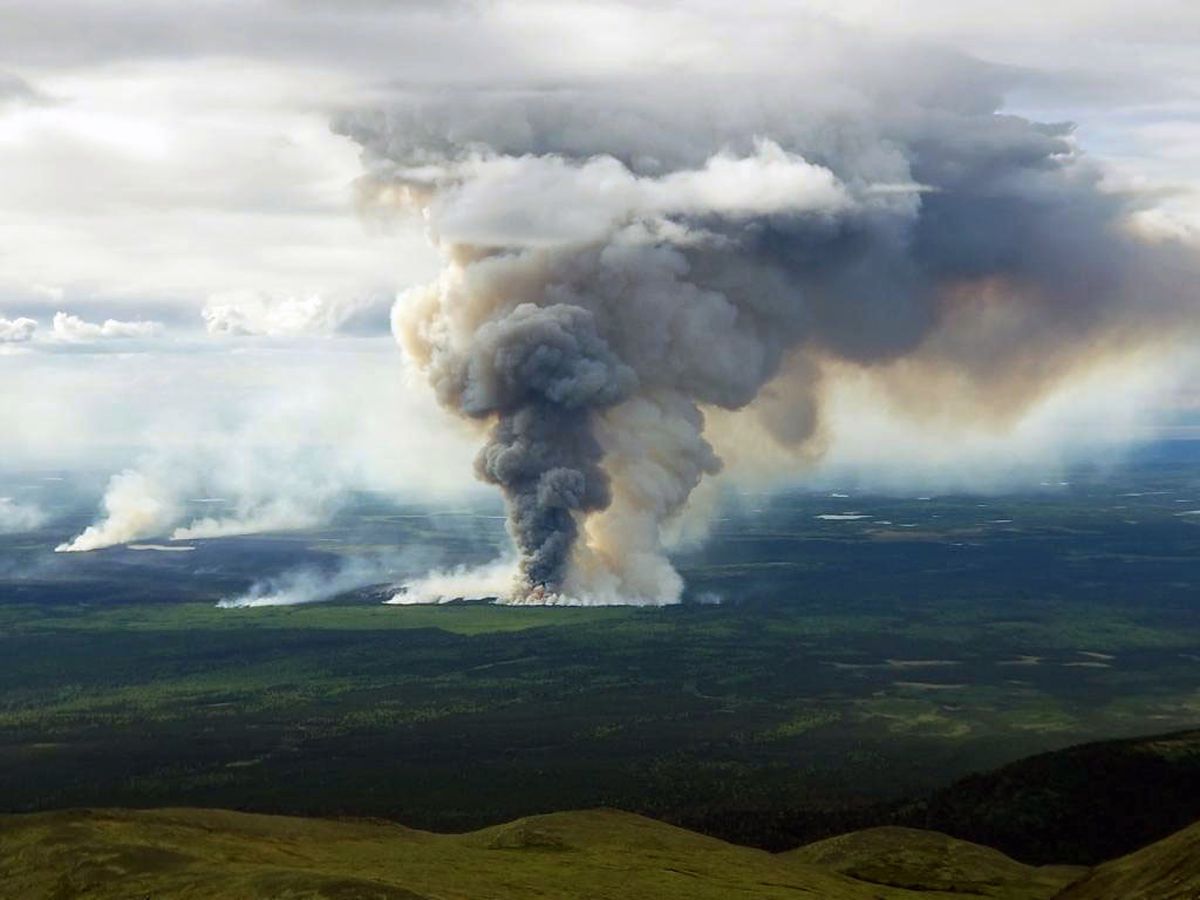 A smoke column on the northeast side of the Swan Lake Fire as seen on Monday, June 17, 2019. (Photo by Casey Lasota / Alaska Division of Forestry)

A smoke column on the northeast side of the Swan Lake Fire as seen on Monday, June 17, 2019. (Photo by Casey Lasota / Alaska Division of Forestry)

Smoke from an 18,000-acre wildfire on the western Kenai Peninsula may affect Anchorage through this weekend, state officials cautioned Thursday.

An advisory issued by the state Division of Air Quality warned that the Southcentral Alaska communities closest to the Swan Lake fire could be affected by the smoke. That includes Anchorage, Sterling, Soldotna, Cooper Landing, Nikiski and Kenai, according to the advisory, which is in effect until Monday.

“Smoke intensity will vary depending on precise location and local wind flow patterns,” the advisory reads. “Smoke concentrations will be such that they could impact public health at times.”

Officials say smoky conditions are likely to be worse at night and during the early morning hours than in the daytime, when warmer conditions cause the smoke to rise above ground level.

An experimental smoke forecast system managed by the University of Alaska Fairbanks predicts the smoke will begin drifting heavily into Anchorage late Friday evening and into early Saturday morning, according to state climatologist Martin Stuefer. People in Anchorage will likely not be able to see the smoke then, but will probably be able to smell it, Stuefer said.

Southwesterly winds began pushing the smoke into Anchorage last weekend, and it’s likely to remain in the area for the next several days until the winds change again, said meteorologist Lucas Boyer of the National Weather Service in Anchorage. The particulates could make for impressive sunsets, Boyer said.

No red flag warnings or fire weather watches were in effect Thursday for Southcentral Alaska. However, the air quality advisory warns that warm and dry weather conditions forecast for the region over the weekend may make conditions favorable for smoke and fires.

The Swan Lake fire is burning unabated in the Kenai National Wildlife Refuge about 5 miles northwest of Sterling. It had grown to more than 18,000 acres by Thursday morning, according to the state Division of Forestry, gaining its most recent 3,000 acres in just two days.

Firefighters are allowing the blaze to take its natural course rather than actively trying to extinguish it because it’s in a limited protection area of the refuge, meaning an area where a fire would serve an ecological purpose.

As the fire continues to swell, though, firefighters are holding a control line to stop it from spreading to nearby Sterling. Fire management officials are confident they can hold that line, said information officer Kale Casey of the Division of Forestry, though the region’s fluctuating winds have made that difficult.

“The light coastal winds on the Kenai are extremely tricky because they shift throughout the day and they’re persistent,” Casey said.

As of Thursday, there was no danger to either the community of Sterling or to anyone driving on the nearby Sterling Highway, about 2.7 miles from the fire’s edge at its closest point, Casey said. He mentioned that the smoky conditions have been preventing some people from recreating in the area.