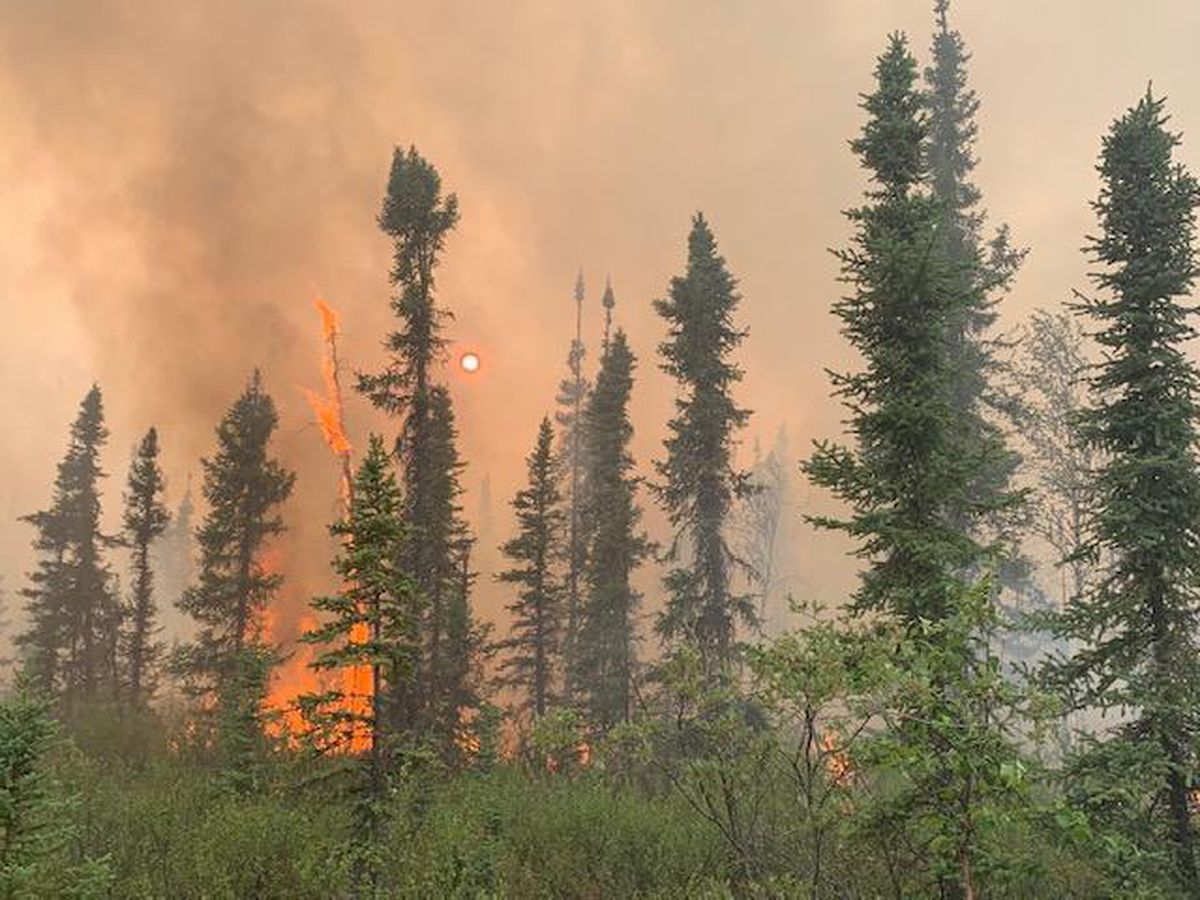 The National Weather Service on Wednesday issued a red flag warning for much of Alaska ahead of widespread lightning storms forecasters say might ignite new wildfires.

The warning covers almost all of Alaska between the Brooks Range and Alaska Range plus Southwest Alaska, extending from the Upper Koyukuk Valley in the north to Bristol Bay in the south, and from the Yukon River Delta in the west to the Copper River basin in the east.

Red flag warnings are issued when “critical fire weather conditions are imminent or occurring now, or will shortly,” the weather service said.

Forecasters expect dry thunderstorms to form along mountain ranges throughout the state Wednesday through Friday, bringing lightning that may ignite new fires on the parched landscape. In some places, those conditions will be exacerbated by small but powerful wind gusts, according to the warning.

The regions affected by the warning are where most of the state’s 121 active fires are already burning. The fires have consumed more than 1.2 million acres so far, driven by a prolonged, statewide heat wave.

That heat wave has begun to abate as the high-pressure system that has been sitting over Southcentral Alaska moved northwest and started to break down, but that breakdown is now causing the thunderstorms that may start new fires, Strader said.

The cumulative smoke from those fires has been affecting almost every community in the state, sparing only the North Slope, said Beth Ipsen, a spokeswoman for the Bureau of Land Management’s Alaska Fire Service.

[Hess Creek fire, burning in Alaska’s Interior, is largest wildfire in the nation]

State meteorologist Mark Smith of the Alaska Division of Air Quality said one sensor near North Pole measured a reading so high last week that it displayed an error message and shut itself down. That’s only happened once before, Smith said.

The smoke has gotten so bad in some places that it’s prevented air tankers and water scoopers from being able to battle blazes in some cases, said Tim Mowry, a spokesman for the Alaska Division of Forestry.

The state Department of Health and Social Services in a Wednesday statement encouraged people sensitive to smoke to limit their exposure by staying indoors with windows and doors closed and running air filters or air purifiers.

For the moment, no end appears to be in sight. Extinguishing wildfires statewide would require at least a couple inches of rain over four or five days, Strader said. As of right now, she said, that’s not in the forecast.