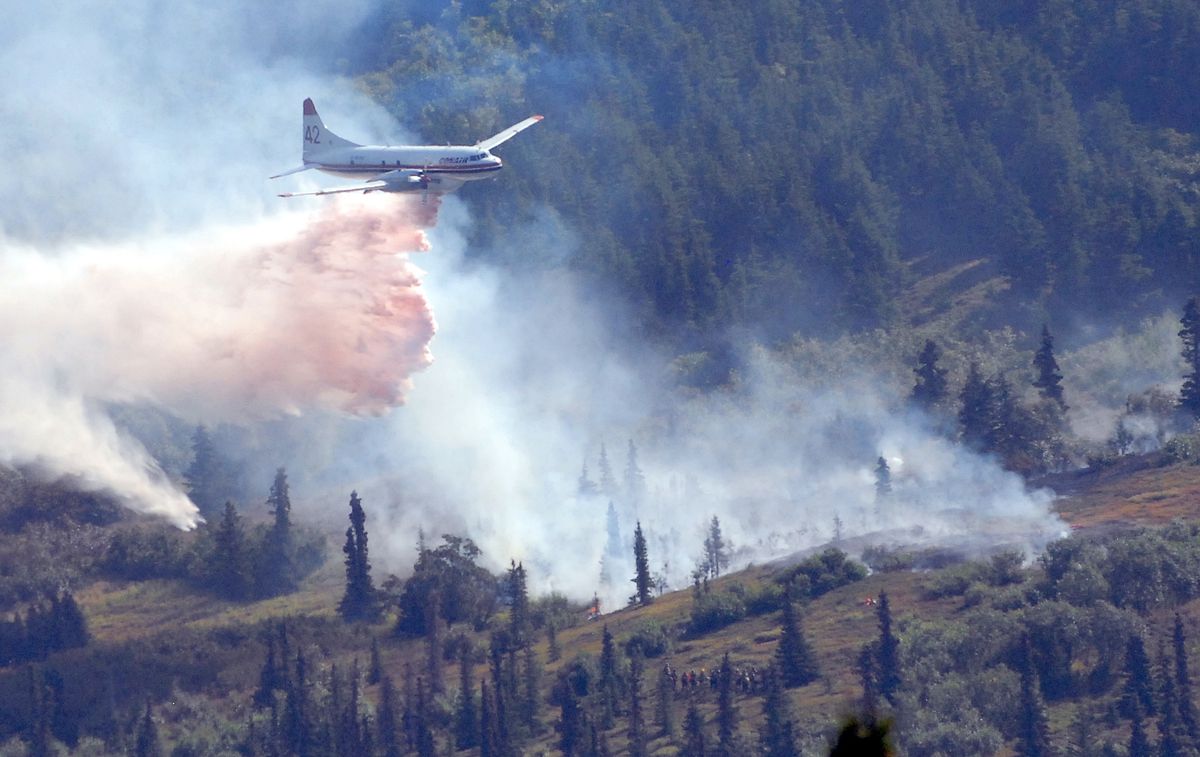 A tanker drops water-enhanced supressant on a wildfire burning on the south slope of the Meadow Creek Valley north of Eagle River on Monday, Aug. 12, 2019. At bottom right a crew of Type 2 Initial Attack wildland firefighters can be seen observing the drop. (Matt Tunseth / Chugiak-Eagle River Star)

A tanker drops water-enhanced supressant on a wildfire burning on the south slope of the Meadow Creek Valley north of Eagle River on Monday, Aug. 12, 2019. At bottom right a crew of Type 2 Initial Attack wildland firefighters can be seen observing the drop. (Matt Tunseth / Chugiak-Eagle River Star)

The Steeple Fire was reported by residents who saw the fire from their houses just after noon on Monday, according to information from the Alaska Division of Forestry. The fire was burning in the Meadow Creek Valley area but did not threaten any structures.

“The fire does not pose a threat to any homes at this time” the Division of Forestry wrote.

Officials said the cause of the fire was determined to be an escaped campfire. An investigation is ongoing.

The fire is near the top of the mountain, according to Alaska Division of Forestry fire information officer Tim Mowry, at least a half-mile from any structures. According to a 4 p.m. update posted by the division, the fire was “successfully boxed in” by ground crews and an air tanker dropping retardant and water-enhanced suppressant.

The update said a helicopter continued to drop water from the nearby Eagle River on the blaze.

A state engine crew responded and the 23-person Gannett Glacier crew hiked into the area, which is inaccessible to Anchorage Fire Department units, Mowry said.

Crews responded Sunday to another fire in Eagle River Valley, about six miles from the Eagle River Nature Center and just off the popular hiking trail that leads to Crow Pass, he said. That fire was contained to about a half-acre in a steep, rocky area.

No cause has been established for that fire, though there was lightning reported in the area, Mowry said.

Crowds of people gathered on Skyline Drive Monday afternoon as word of the fire spread. Interested onlookers Pete and Sue Panarese joined Frank Baker in watching the action from a vantage point on the southside of Mount Baldy overlooking the blaze.

The trio know the mountains near Eagle River as well as anyone -- Pete Panarese is a former Chugach State Park superintendent and Baker is a frequent Star and ADN contributor who writes about hiking the Chugach.

“There’s a trail atop that ridge and it goes all the way down to Steeple,” Baker said, pointing to the Mile High ridgeline a few hundred yards above the fire.

The Panareses live just north of where the fire was burning, while Baker lives on the other side of Mile High to the south. Before the cause was reported, the group speculated it was started by a rogue campfire -- something the Panareses said has happened before in the area.

“Leaving a fire unattended, a cigarette butt or whatever,” Pete Panarese said.

The Panareses first got an inkling there was a fire in the area when they saw the spotter planes flying over their home. They watched as a helicopter started dropping water, and then as the Gannett Glacier crew of Type 2 Initial Attack firefighters marched up the slopes.

“We look over and here comes this platoon of folks,” he said.

They then watched in awe as an air tanker from Palmer dropped the BlazeTamer suppressant on the blaze, knocking it down almost immediately at around 2:30 p.m. Panarese said that was a relief -- and quite a sight to see.