More freak weather comes to Alaska, which has had an unprecedented summer 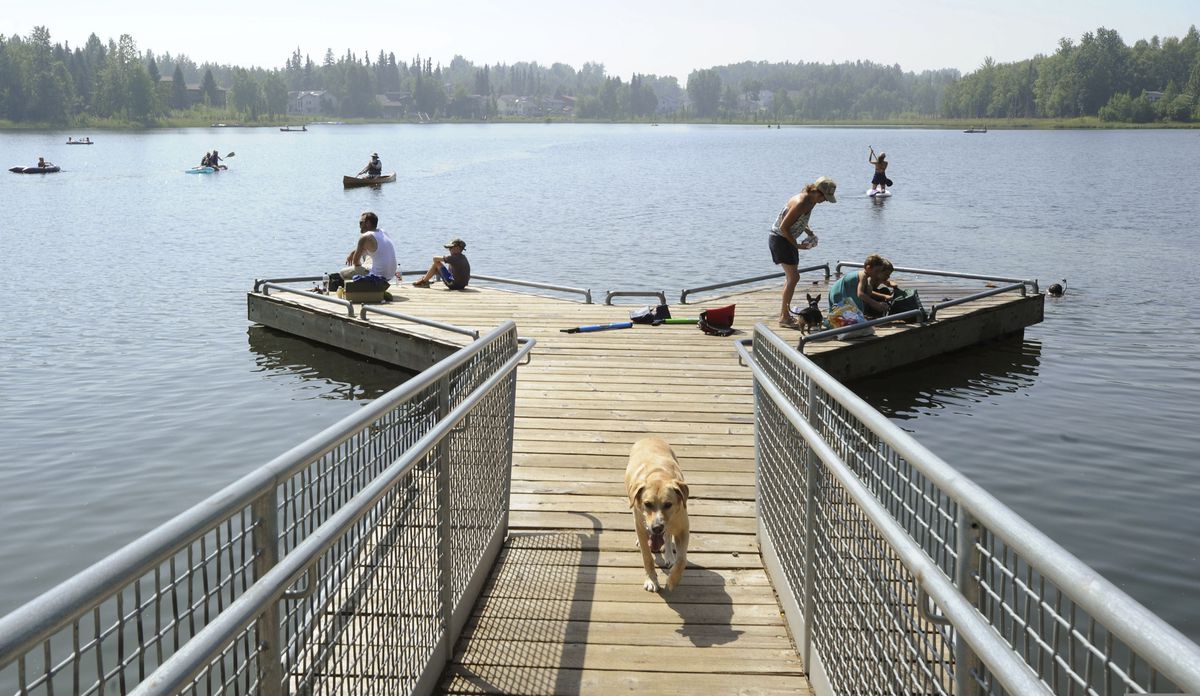 In southeast Alaska, the normally lush forests are falling prey to spruce bark beetles and hemlock sawflys, which are taking advantage of a lack of rainfall and higher than average temperatures. The dry weather has also forced cuts in hydropower production, forcing a switch to more expensive and polluting diesel power generation.

In Anchorage, this summer has been the hottest and smokiest the city has ever recorded, with plumes from distant wildfires obscuring the skies and aggravating health problems. July was the state's warmest month on record, in keeping with the globe.

In western Alaska, there has been a multi-species mass mortality event, with washed up seals, walrus and birds, likely due in part to a total lack of sea ice and record warm ocean waters, according to Rick Thoman of the International Arctic Research Center.

On a call with reporters Thursday, Thoman said there have also been "dead non-spawned salmon in some places in significant numbers," coinciding with high river temperatures of 70 degrees or greater. The wildlife deaths are hitting close to home for many Alaskans, a state in which commercial fishing and hunting are a source of livelihood for many, and indigenous communities practice subsistence hunting.

Monday marked the warmest August day recorded in Anchorage. It also was the 43rd consecutive day the city of about 300,000 has reached 70 degrees — the longest such streak on record. The low Monday night temperature didn’t drop below 63 degrees in Anchorage — its warmest night on record. It tied that record again overnight Tuesday.

Just about every temperature record has fallen in a state that’s running 6.2 degrees above normal since June. Saturday, Sunday, Monday, and Tuesday all hit 77 degrees in Anchorage, setting record high temperatures for the date, compared to the average high, which is 65 degrees.

And another period of record heat is on the way for this weekend.

The balmy weather sounds nice in theory, but for native Alaskans watching their landscape melt and burn, it's anything but. Nearly 2.5 million acres have burned in more than 600 wildfires this year in Alaska. This is not yet a record for the season, but according to Thoman, the 1991-2010 median-to-date is 681,000 acres.

The fires aren’t confined to Alaska. Wildfires have been flaring all across the Arctic. In Greenland, wildfires continue to burn, while at least 13 million acres have already gone up in flames in Siberia. The cloud of smoke billowing from Siberia alone could cover the entire European Union, according to the World Meteorological Organization.

While the fires are raging, the ice is vanishing. Eastern Siberian sea ice is running at its second lowest coverage for the date on record. Across the entire Arctic, 2019 is also in second place for the lowest sea ice extent on record - running just behind the record-shattering 2012 melt season. Adjacent to Alaska, the Chukchi Sea is likely to become ice free by September. According to Thoman, there was no sea ice within 125 miles of the Alaska coastline as of Thursday, and the now-exposed ocean waters are gaining large amounts of heat energy from the sun that will be slow to dissipate in the fall and winter.

The warmer than average waters will reverberate into the cold season, since the fall freeze-up will be delayed, likely leading to an unusually mild fall and early-winter period.

“What happens in the Pacific and Arctic Oceans has a profound effect on Alaska’s temperature,” Thoman said.

A lack of fall and early winter ice will leave coastal communities vulnerable to erosion and storm surge flooding from powerful storms that typically buffet the state. Ecosystems within the Bering Sea are undergoing rapid changes that present challenges for the state's massive seafood industry.

One unique aspect of this summer in Alaska has been the humidity, a characteristic not typically associated with life in the Frontier State.

[Anchorage usually loves warm weather, but this heat wave is something else]

Daily lows in Alaska in July ranked higher than any other month since at least 1925 over a very broad area. "That's due in significant part to comparatively high humidities observed across Alaska," said Thoman.

An analysis of Anchorage's temperature data for the past three months reveals that it has been more humid than any other three-month period in recorded history. The average dew point was nearly 55 degrees, at least three degrees higher than the previous record from 1979, and a 12 percent increase over the old record.

In fact, data indicates that since 1953, the air in Anchorage has become 20 percent more humid on average. The exceptionally warm air mass has brought with it noticeable humidity, but that doesn't necessarily mean southern Alaska has seen more rain. In fact, they're dry - the same high pressure dome that's brought the heat and humidity has been deflecting most storm systems farther north.

[Anchorage’s extra-warm summer is getting even warmer in August]

The dome of heat that’s been hovering over Alaska is noticeable thousands of feet up in the atmosphere. The warmth has caused the atmosphere to expand vertically, just as a balloon would grow in volume if heated. The 500 millibar level - below which half of the atmosphere’s mass resides - has been running nearly 200 feet higher than normal since May.

One of the most impressive warm air bulges so far is set to move over the Aleutian Islands this weekend, with the 500 millibar level expected to be more than a quarter mile above normal. That means the heat dome's 500 millibar level will challenge records for highest 500 millibar heights for many regions in Alaska, a record of interest to meteorologists because it signifies how unusual this air mass really is.

"It is amazing to me we can get heights this high this far north," said Gene Petrescu of the National Weather Service Scientific Services Division. He predicts the all-time 500 millibar height records at St. Paul and King Salmon, Alaska - both locations from which weather balloons are launched - will "very likely be broken." For Bethel, Cold Bay, and Kodiak, "it will be close," he said.

In situations like this, “the core of the warmth is aloft,” explained Petrescu. The warmth is less pronounced near the surface due to “stable conditions in the lower atmosphere, especially over the ocean.” That’s why most of the upper air records in Alaska occur in August. In some places, it will be as warm a mile up as it is on the ground.