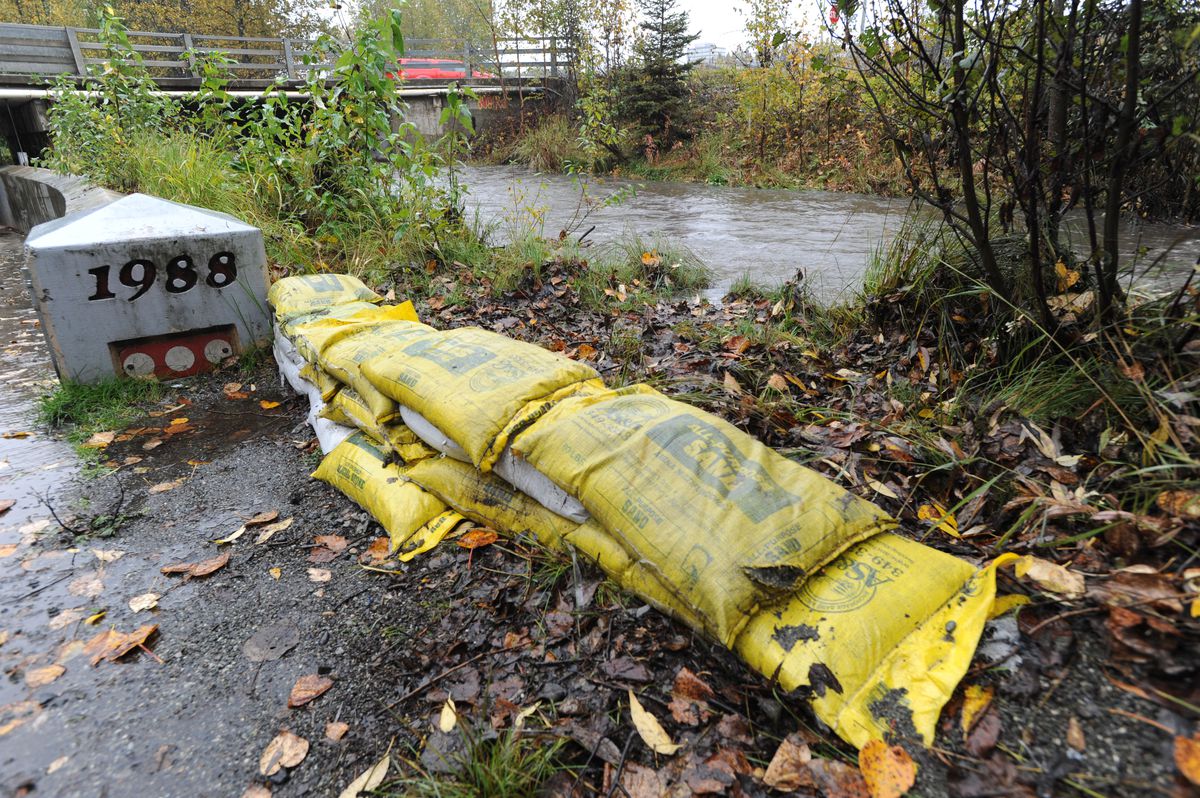 Sand bags are placed to hold back high water from Chester Creek so it doesn't spill onto the Chester Creek trail, Sept. 20, 2019. (Anne Raup / ADN)

Sand bags are placed to hold back high water from Chester Creek so it doesn't spill onto the Chester Creek trail, Sept. 20, 2019. (Anne Raup / ADN)

After several days of steady rainfall, the Anchorage Bowl saw minor flooding in small streams and other low-lying areas Friday, with wet weather continuing into the weekend.

By 4 p.m. Friday, the front range of the Chugach Mountains had received about 1.25 inches of rainfall in the previous 24 hours, with the rest of Anchorage receiving between 0.55 and 0.75 inches, according to the National Weather Service. Amid moderate to heavy rainfall and “moderate flooding in the upper portions of Campbell Creek and possible minor flooding at Campbell Creek near Dimond Boulevard,” the weather service issued an urban and small stream flood advisory for Anchorage that expired Saturday morning.

After a hot and drought-stricken summer, rain has fallen every day since Sept. 7, with measurable rain occurring daily since Sept. 15, said Joe Bartosik, a meteorologist with the weather service in Anchorage.

The current storm has contributed nearly an inch of rain to September’s total of 2.27 inches, the National Weather Service said Thursday. Because of the current rain and an “active storm track” expected for the rest of the month, the weather service says “chances are very good we will end the month with above normal rainfall for the first time since May.”

Already this month, more rain has soaked Anchorage than all of June, July and August combined, which only saw 0.90 inches total accumulated rainfall.

Bartosik forecast more rain for next week, but expected less rain than what Anchorage received this week. “Sunday will be the driest day of the week,” he said.

Cooler air is also predicted to move into the area this weekend. Parts of East Anchorage, the southern Susitna Valley, the western Matanuska Valley and the Eagle River Valley could see their first frost Sunday morning, Bartosik said.