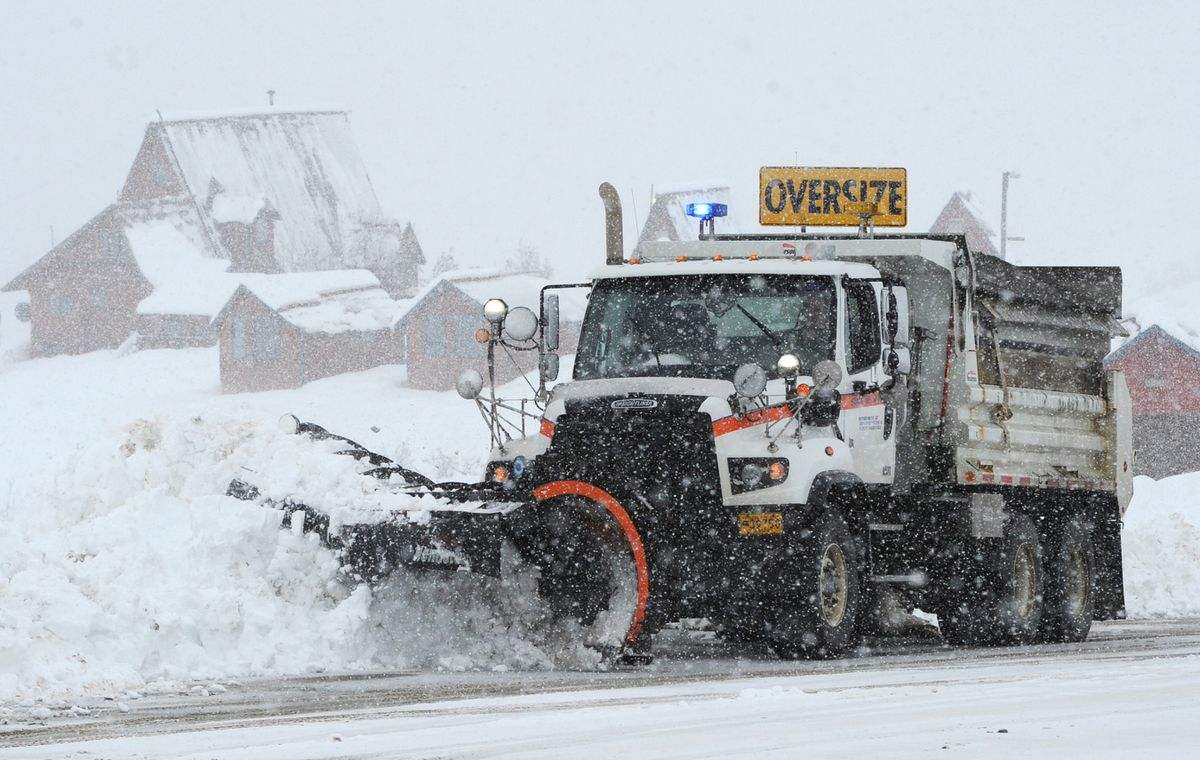 Jim Meehan with state DOT/PF plows the parking lot between Hatcher Pass Lodge and Independence Mine on Wednesday, Oct. 9, 2019. This area has received more than twenty inches of snow in the past week. (Bill Roth / ADN)

Jim Meehan with state DOT/PF plows the parking lot between Hatcher Pass Lodge and Independence Mine on Wednesday, Oct. 9, 2019. This area has received more than twenty inches of snow in the past week. (Bill Roth / ADN)

A weather system bringing snow to the Susitna Valley created “very difficult driving conditions” north of Talkeetna overnight into Thursday, according to the Alaska Department of Transportation.

A weather spotter at Chulitna reported snow tapering off as of Thursday morning but about 16 inches on the ground, according to the National Weather Service. Another spotter at Hatcher Pass Lodge said that much new snow had fallen near Independence Mine but it was still coming down heavily as of midmorning.

The National Weather Service canceled a winter weather advisory for the Susitna Valley — including the communities of Talkeetna, Willow and Cantwell — that called for 2 to 4 inches more snow and total storm accumulation of 6 to 16 inches with the highest amounts from Chulitna to Broad Pass at Mile 201 of the Parks Highway.

About 4,000 Matanuska Electric Association members in Willow and Talkeetna experienced a brief, 10-minute power outage Thursday morning. The Palmer-based co-op warned of the possibility of more outages throughout the day “with the heavy snowfall and snow unloading on the lines” in a social media update.

State transportation officials warned Thursday morning of very difficult driving conditions on a section of the Parks between Mile 163 and Mile 194. Chains were recommended for driving conditions including mixed rain and snow, frozen slush and potential hydroplaning.

A winter storm warning was in effect through Saturday morning for an area south of Quartz Lake to the Alaska Range foothills for communities including Salcha, Delta Junction and Fort Greely. Forecasters were calling for heavy snow leading to difficult travel conditions and a total snow accumulation of 3 to 5 inches with up to 9 inches in certain areas.

The same weather system was dumping snow in eastern Alaska Range areas west of Tok, the weather service said. Travel will be “very difficult to impossible,” the National Weather Service warned. Additional snow accumulations of 8 to 12 inches, with localized amounts up to 19 inches, were expected.

Meanwhile in Anchorage, rain remains in the forecast through Thursday night with a slight chance of rain and snow showers Friday.

Drivers can check the latest road conditions at 511.alaska.gov.