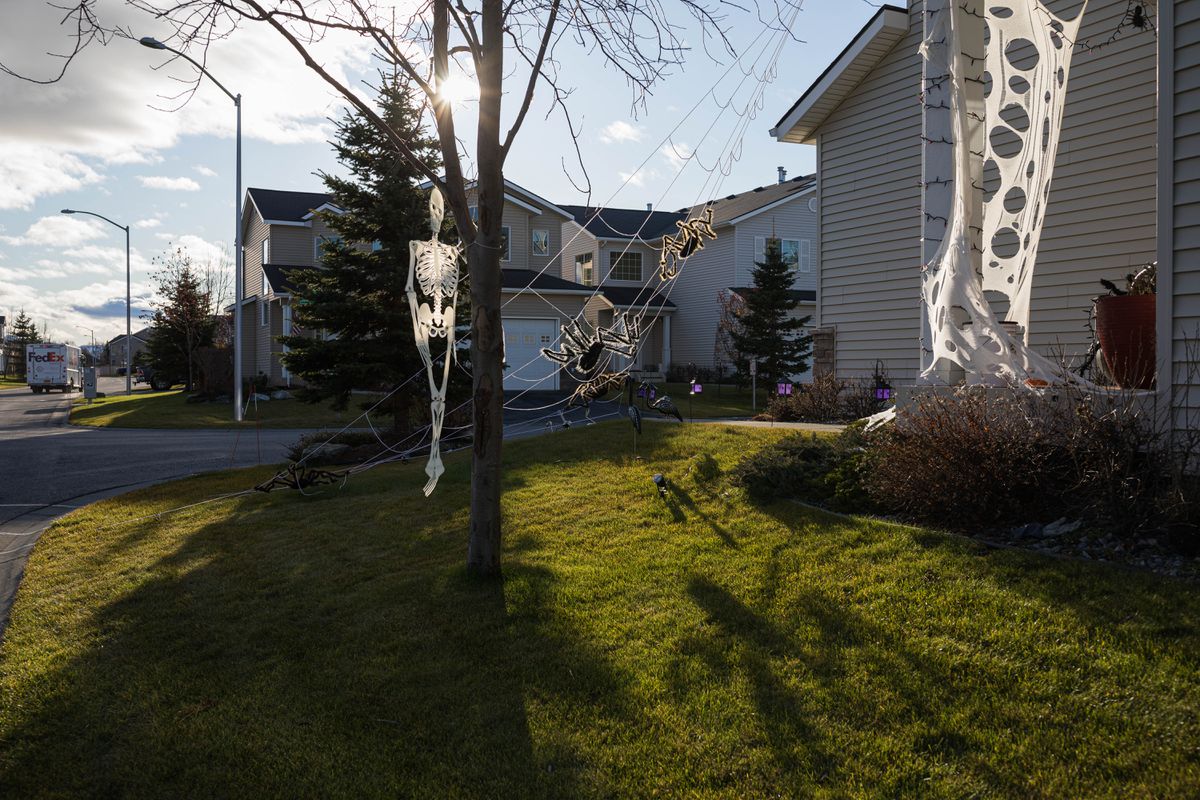 A yard is decorated for Halloween on Wednesday in South Anchorage. (Loren Holmes / ADN)

A yard is decorated for Halloween on Wednesday in South Anchorage. (Loren Holmes / ADN)

Kimberly Jenkins can only remember one Halloween without snow during the nine years she’s lived in Eagle River. Despite forecasts of higher than normal temperatures Thursday, Jenkins said she is still skeptical.

“It’s always either we’re trudging through the snow, or it’s snowing out as we’re trick-or-treating,” she said while shopping Thursday for last-minute Halloween supplies.

Normally, more than 5 inches of snow has fallen in Anchorage by the end of October and about an inch is left over during Halloween, according to National Weather Service meteorologist Michael Kutz. But less than a half-inch of snow has fallen this month, and Kutz said rain, not snow, is expected on Halloween.

Temperatures are predicted to stay above normal on Halloween and Kutz said the low will likely hover barely above freezing at 34 to 36 degrees. Rain showers are expected early Thursday afternoon and will likely continue as a light drizzle until sundown.

“It’s nothing significant,” Kutz said. “Just enough to be irritating.”

The holiday falls at the end of a warm-weather streak. Wednesday marked the eighth consecutive day with temperatures ranging from 10 to 22 degrees higher than average, Kutz said.

Early in the week, communities including Cold Bay in the Aleutians, King Salmon on the Alaska Peninsula, St. Paul in the Bering Sea, Kodiak and Anchorage had record-breaking warm weather. Throughout the state, temperatures remained above normal through Wednesday, Kutz said. Snow and freezing rain hit Interior Alaska on Wednesday, but Kutz said those areas are still behind normal snowfall times and totals.

Four out of five October days in Anchorage had above-normal temperatures and the monthly average is 6.3 degrees higher than expected.

The unseasonably warm weather was brought in by a stream of tropical air pushed north from Hawaii early in the week. The system moved cold air from Alaska to the western portion of the country and caused temperatures there to plummet.

The first snowfall in Anchorage that sticks usually hits near the end of October, but Kutz said it may not come until closer to Thanksgiving this year. Trick-or-treaters will only need light layers instead of snowsuits, he said.

Paul Godwin remembers walking through waist-deep snow to collect candy on Halloween during the ’80s. He bought his costumes a few sizes too big so he could fit them over his snowsuit.

“We were geared up,” he said. “I had a snowsuit, moon boots on and everything.”

Godwin, who is now a manager at Party World in Anchorage, said he’s noticed fewer families buying oversize outfits this year, partly due to the warmer weather but also because of increasingly popular indoor Halloween events.

Jenkins and her boyfriend, Luke Sorensen, take their children trick-or-treating every year, “no matter what,” in the neighborhood where he grew up. Jenkins usually follows behind with the car because her two daughters get cold walking through the snow. If the weather is nice Halloween night, she said, she hopes to walk alongside her family this year, but after so many snowy Halloweens, she has a hard time imagining it.