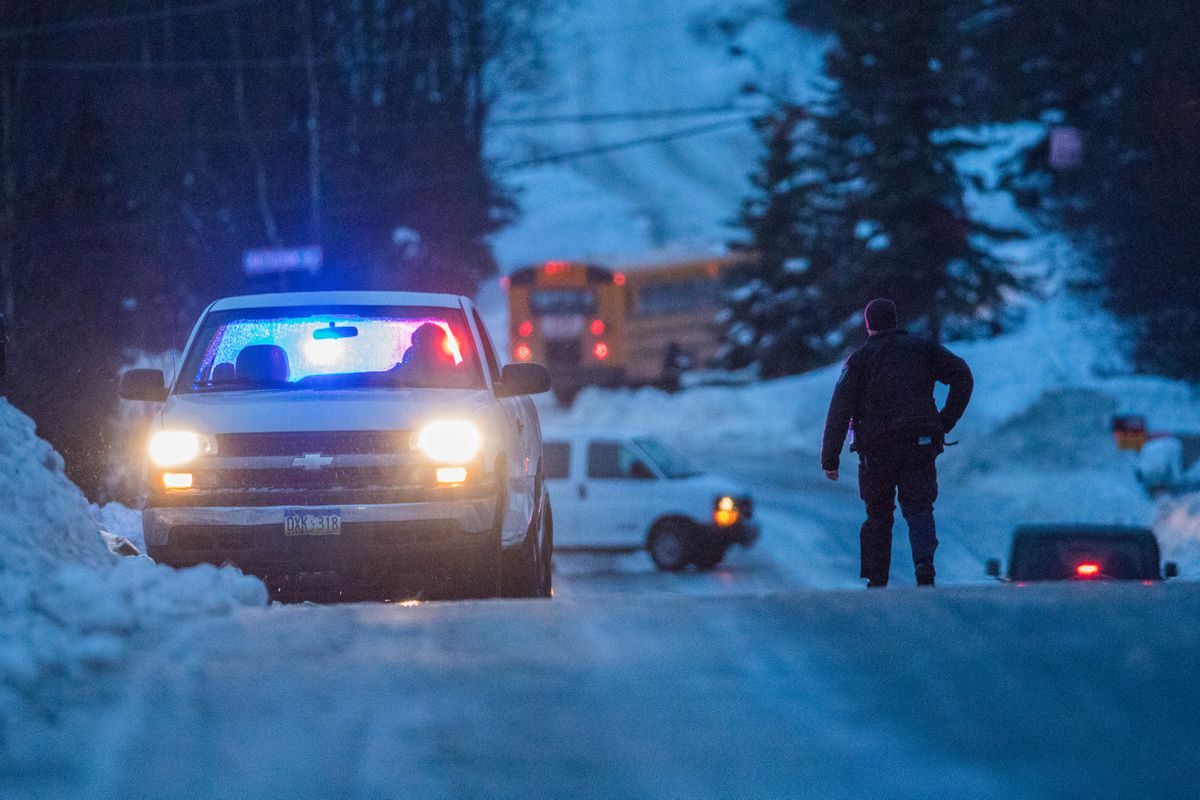 A police officer helps motorists stranded on the side of an icy Hillside Drive early on Jan. 26, 2017. Freezing rain made roads extremely icy during the morning commute. (Loren Holmes / ADN archive)

A police officer helps motorists stranded on the side of an icy Hillside Drive early on Jan. 26, 2017. Freezing rain made roads extremely icy during the morning commute. (Loren Holmes / ADN archive)

Snow is possible Thursday in Anchorage, but only after freezing rain glazes the city Wednesday, meteorologists said.

Snow is expected to spread westward from the Copper River Basin area but hit Anchorage as freezing rain starting in the afternoon, according to a winter storm warning issued Wednesday.

Rain began falling near Valdez early Wednesday and was expected to turn into snow by midmorning, said National Weather Service meteorologist Kimberly Hoeppner. The Copper River Basin could see between 6 and 10 inches of snow by Thursday afternoon.

The weather service issued a blizzard warning for Valdez and Thompson Pass. High winds, already blowing at 30 to 35 mph early Wednesday, are forecast to mix with the snowfall until Thursday afternoon, Hoeppner said. The blizzard was expected to drop a foot to 20 inches of snow.

In Anchorage, a “wintry mix” of rain, freezing rain and snow was in the immediate forecast, meteorologist Eddie Zingone.

A tenth of an inch to a quarter-inch of freezing rain could fall by Thursday morning, Zingone said, eventually turning into up to an inch of snow by 1 p.m.

The biggest concern will be slick roads in Anchorage and throughout Southcentral Alaska on Wednesday and Thursday. There’s also a chance for ice buildup to down small trees or branches.

“The thing with freezing rain is it doesn’t take a whole lot of it to cause a huge traffic impact,” Zingone said.

The storm is the result of colder arctic air filtering south into Alaska and meeting a front carrying tropical moisture, meteorologist Patrick Doll said Tuesday. Predictions call for a “wintry mix” of precipitation or freezing rain throughout the Kenai Peninsula and northward, but Doll said the Susitna Valley will likely get snow.

Southcentral Alaska has seen temperatures consistently higher than normal all year, Doll said. Every month since March 2018 has had above-average temperatures.

Anchorage and other cities had record-breaking temperatures in late October. The warm weather continued into November. Doll said Bethel tied a record high daily temperature Monday at 41 degrees, and St. Paul, on an island in the Bering Sea, set a record Sunday at 47 degrees.

In Anchorage, November is on track to be the third warmest in recorded history, Doll said.

The first snow that sticks generally falls sometime between Nov. 10 and 20, Doll said. Anchorage had two-tenths of an inch of snow measured at the airport on Oct. 16, but it quickly melted.

Doll said weekend high temperatures are expected to be in the mid-30s. There’s potential for scattered rain or snow showers Thursday and throughout the weekend, but Zingone said it’s not expected to be significant.