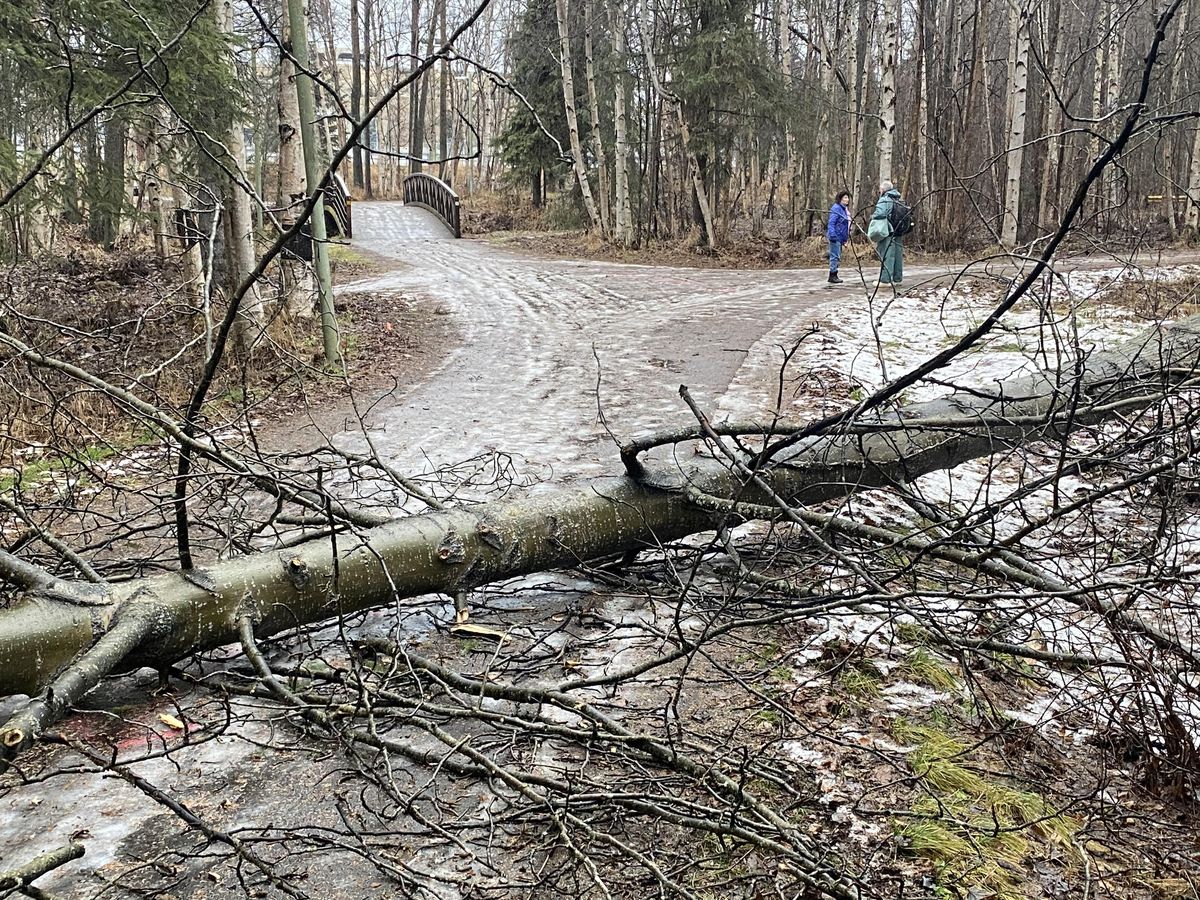 As gusting winds thrashed Anchorage and the surrounding areas overnight Wednesday into Thursday, snow was piling up in the Susitna Valley.

The Susitna Valley got around 1 to 3 feet of snow through midday Thursday, with the heaviest snowfall north of Talkeetna. Most of the precipitation along the Parks Highway corridor north of Willow, up to Broad Pass, was expected to shift to the west Thursday evening — but not before another 6 to 12 inches would fall, according to Shaun Baines, a meteorologist at the National Weather Service in Anchorage.

“And then overnight tonight, that snow is going to sit mostly over the western Susitna Valley,” Baines said.

Hatcher Pass got around 4 feet of snow, according to a rough estimate by the weather service Thursday afternoon. In its morning avalanche forecast, the Hatcher Pass Avalanche Center said the avalanche hazard could rise from considerable to high Thursday amid continuing strong winds and heavy snow.

𝗛𝗮𝘁𝗰𝗵𝗲𝗿 𝗣𝗮𝘀𝘀 𝗔𝗿𝗲𝗮 Greater than 4 feet of snow last night and high winds. At 9 am, still snowing and traffic was being...

South of Anchorage at Turnagain Pass — where heavy, wet snow created tricky driving conditions Thursday morning — most of the precipitation had turned to rain by early Thursday afternoon with potentially some light snow. A decrease in winds and a rise in temperatures “greatly improved travel conditions through there,” Baines said.

On Wednesday night, gusts had blown trees into power lines, thrashed buildings and left close to 3,000 people temporarily without power in Anchorage, where temperatures remained too high for snow in most areas. Rain around Anchorage on Thursday was falling as snow at elevations above 2,000 feet, Baines said, and 3-foot snowdrifts were reported at Glen Alps and near Hiland Road in Eagle River.

A weather station at a home on the Upper Hillside along Upper DeArmoun Road recorded gusts of 112 mph Wednesday night, Baines said. Gusts topping 100 miles per hour aren’t unprecedented for the Upper Hillside. Winds reach those speeds once or twice per year in that area, according to Baines.

Meanwhile in Eagle River, Matt Tomter, owner of Matanuska Brewing Co., was inside the busy bar and restaurant on Wednesday night when someone came in and announced that part of the building’s roof had flown off.

Unbeknownst to Tomter and the roughly 125 guests eating and drinking inside, the wind had seemingly gotten under the top layer of the roof and pulled it from the building.

A video posted on Facebook by Matanuska Brewing shows part of the roof flying into the parking lot, but largely missing any vehicles. No one was hurt and the brewery remained open, Tomter said.

“It was fun to see a bunch of people move their cars and then get right back to drinking a beer,” Tomter said.

The pub was already scheduled to be closed for the Thanksgiving holiday, and a crew was at work Thursday morning repairing the roof, according to Tomter. They planned to be open for breakfast Friday morning.

Municipal Light & Power announced two outages totaling 100 people north of Northern Lights Boulevard off of Boniface Parkway and another outage area in Rogers Park. A tree caught fire in Rogers Park, slowing repairs on the power line, according to ML&P. ML&P announced that all power had been restored early Thursday.

While the wind had tapered off in some parts of Anchorage by Thursday morning, other areas — like the Hillside — were expected to see winds blowing at 45-60 mph through the evening, meteorologist Baines said. The next chance of precipitation around Anchorage is during the day Saturday, when rain and snow are possible.

“My guess is we’re going to see both,” Baines said.

A storm moving into the region later Saturday night and through Sunday looks favorable to bring more snow, Baines said, but whether that storm will pass through Anchorage isn’t certain.