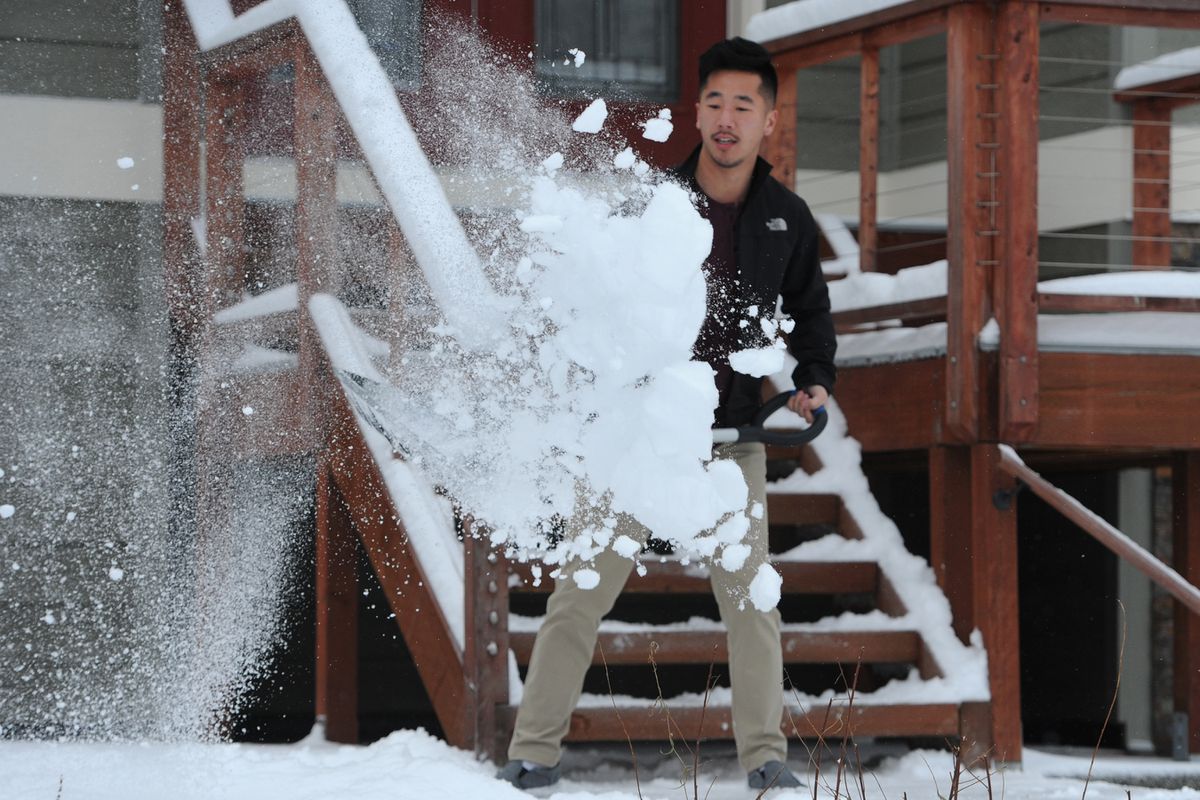 Matt Ha shovels snow at a residence in the Turnagain Heights subdivision on Christmas Day. Ha said he was born and raised in Anchorage and now lives in San Francisco, but is home for the holidays. (Bill Roth / ADN)

Matt Ha shovels snow at a residence in the Turnagain Heights subdivision on Christmas Day. Ha said he was born and raised in Anchorage and now lives in San Francisco, but is home for the holidays. (Bill Roth / ADN)

By the time kids woke up on Christmas morning to see if Santa had stopped by, there was already 5 to 7 inches of snow spread throughout Anchorage.

The Christmas Eve snowfall was just the beginning. National Weather Service meteorologist Jason Ahsenmacher said more snow is expected to fall through the weekend and possibly into next week. Temperatures are expected to drop low enough to keep snow on the ground.

“I don’t see us going above freezing or losing the snow anytime soon,” he said.

By Thursday afternoon, Ahsenmacher said, Anchorage is expected to get another 1 to 5 inches of snow. East Anchorage will likely see more than the west side.

A blast of Arctic air is expected to keep the city cold, and Ahsenmacher said Anchorage will see the lowest temperatures Friday morning, when the temperature will plunge below zero. East Anchorage could get as low as minus 15, he said.

Eagle River saw 5 to 7 inches of snow by Christmas morning and Ahsenmacher said 3.3 inches was reported in northwest Palmer. The Matanuska Valley is expected to get 1 to 3 inches of snow through midday on Thursday.

The weather service issued a winter weather advisory for south of Anchorage, through Turnagain Arm and the Kenai Peninsula. Whittier, Seward and Girdwood are expected to see between 4 and 8 inches of snow through Thursday evening, the advisory said.

Ahsenmacher said driving conditions along the Seward Highway could become dangerous as wind gusts up to 35 mph are expected to mix with falling snow to reduce visibility. Portage, Seward and the end of Turnagain Arm are likely to be hit the hardest, Ahsenmacher said.

Whittier and Girdwood both had 4 inches of snow by Wednesday morning.

The snowfall comes after an unseasonably warm year. Anchorage set numerous high temperature records and this November was the warmest on record. The warm trend continued into December, and Ahsenmacher said many days this month saw temperatures significantly higher than normal. Even with the impending cold snap, he said, the month will likely end up being warmer than average.

The good news, Ahsenmacher said, is there’s still a chance that the upcoming snowstorms could bring Anchorage up to or above normal snowfall levels for the month.

“We all wanted snow and now it’s coming,” he said.