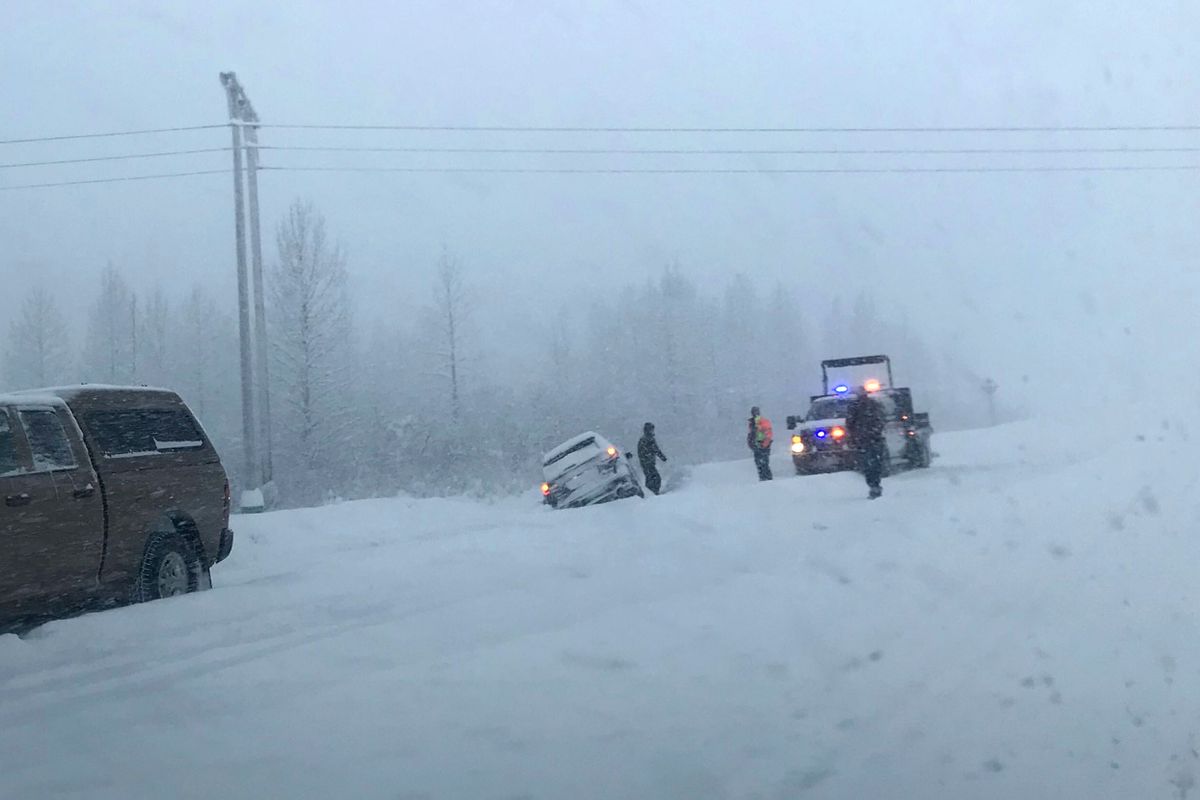 Strong winds and a double-digit dumping of snow made for precarious driving conditions along Turnagain Arm on Monday morning and through the early afternoon.

The storm subsided, but another is expected to hit mid-week.

Accumulation along Turnagain Pass was recorded at 10 inches or more by Monday afternoon.

Kutz said the worst of the storm appeared to be south of Bird Point down to the Hope cutoff, where visibility was about a quarter-mile.

By about 3 p.m., the storm had subsided, McCarthy said, and driving conditions improved. However, McCarthy said that could change.

“We’re expecting weather to come in and out," McCarthy said.

The blustery weather came after a week of clear skies and frigid temperatures. The storm will be followed by another similar low-pressure storm midweek, said Kutz.

"It’s going to slowly peter out, but it’s not going to be much of a change overnight,” Kutz said.

The heavy snowfall impacted the Kenai Peninsula, Seward, Whittier and Girdwood, according to a weather advisory. Six to 10 inches of snow was expected to fall throughout the region, with up to 24 inches near Whittier. Recordings showed accumulation had reached or surpassed 10 inches in several places by the afternoon.

By noon, the Chugach National Forest Avalanche Information Center reported 10 inches of new snow in the Turnagain Pass parking lot, and wind gusts were at 30 mph.

The storm also brought in heavy winds, with gusts as high as 55 mph in Seward and consistent winds at 30 to 40 mph near Whittier, Kutz said.

Wendy Wagner, the director of the Chugach National Forest Avalanche Information Center, was one of many Seward Highway travelers who stopped at the bustling Tesoro gas station in Girdwood on Monday afternoon.

Wagner had snowmachined at Turnagain Pass earlier in the day and said there was 13 inches of snow on the highway at the pass around midday.

Late Monday morning, snow was falling at the pass at a rate of 4 inches an hour, according to Wagner, who described it as a “sleeper storm.” Skies were starting to clear around Girdwood by about 2 p.m., and Wagner said the snow was starting to level off at Turnagain Pass by 1 p.m.

Conditions were expected to improve Monday afternoon and into the evening, Kutz said.

The storm will bring some reprieve from the subzero weather Anchorage has been experiencing. On Tuesday, temperatures will reach about 10 degrees, and 20 on Wednesday. They’ll drop back down to subzero Thursday night, Kutz said, with Eagle River getting to at least 10 below.