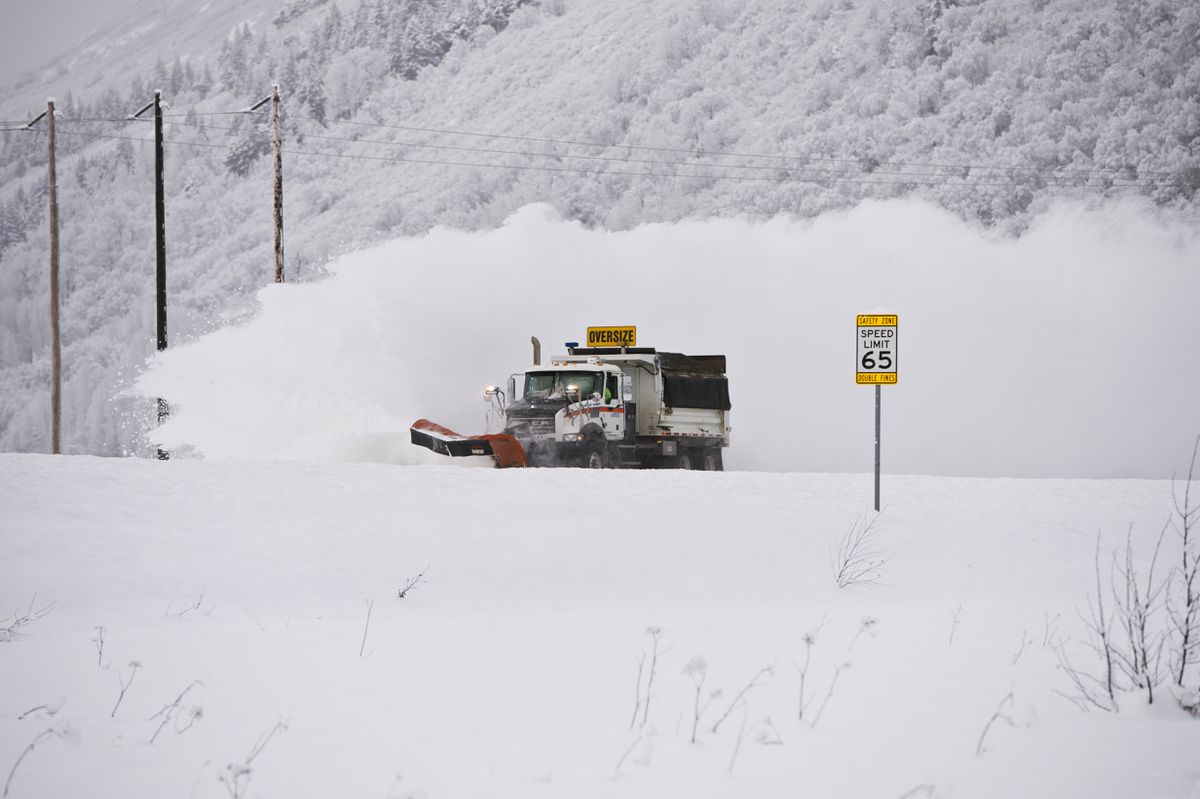 An Alaska Department of Transportation plow clears a stretch of the Seward Highway near Girdwood on Wednesday morning. (Marc Lester / ADN)

An Alaska Department of Transportation plow clears a stretch of the Seward Highway near Girdwood on Wednesday morning. (Marc Lester / ADN)

A storm is expected to bring heavy snow and winds to Turnagain Arm and eastern Prince William Sound on Wednesday, meteorologists said. Near-whiteout conditions were expected in the afternoon along the Seward Highway from Girdwood to Seward.

The National Weather Service issued a blizzard warning from 3 p.m. Wednesday through early Thursday. Girdwood, Portage Valley, Whittier, Turnagain Arm and Turnagain Pass were expected to get hit by a low pressure system moving in from the Gulf of Alaska and pairing with easterly winds, said meteorologist Ben Bartos.

Heavy snow began falling early Wednesday and Bartos said about 4 to 10 inches is expected throughout the area Wednesday, although some higher amounts are possible locally. The snow was expected to taper off in the afternoon as it’s replaced by wind gusts of 45 to 60 mph. The high winds will blow around the fresh snow so much that Bartos said it’ll look as if it’s still snowing heavily. Visibility is expected to drop to a quarter-mile or less in some areas.

“If you don’t have to go anywhere along the highway, don’t go,” Bartos said. “Today would not be the day to take a leisurely trip to the Peninsula.”

Road conditions are expected to be the worst near eastern Turnagain Arm but conditions along the highway could be treacherous until close to Seward.

A storm earlier this week dropped more than a foot of snow along portions of the Seward Highway and caused dangerous driving conditions throughout much of Monday.

Bartos said the storm system is not expected to push into the Anchorage Bowl on Wednesday although the area could see winds that are slightly higher than normal.

There’s a chance for light snow in the Mat-Su, but Bartos said the weather there is expected to stay calm.

The weather service issued a blizzard warning for Valdez and Thompson Pass until noon Wednesday. Wind gusts up to 55 mph were expected to pair with 2 to 4 inches of falling snow. The area was also predicted to see wind chill temperatures as low as minus 30, which could cause frostbite to exposed skin in 20 minutes.

Bartos said the storm was expected to move from the Thompson Pass area into Turnagain Arm throughout Wednesday. Bartos said the heavy snowfall is expected to hit popular backcountry recreation areas, and the fresh snow could increase avalanche risk.

The Chugach National Forest Avalanche Information Center listed the risk at Turnagain Pass to be considerable Wednesday morning and said the danger could increase as the storm amps up. Avalanche risk is high in Portage Valley.