Rainy weather expected to continue in Southcentral Alaska through the weekend 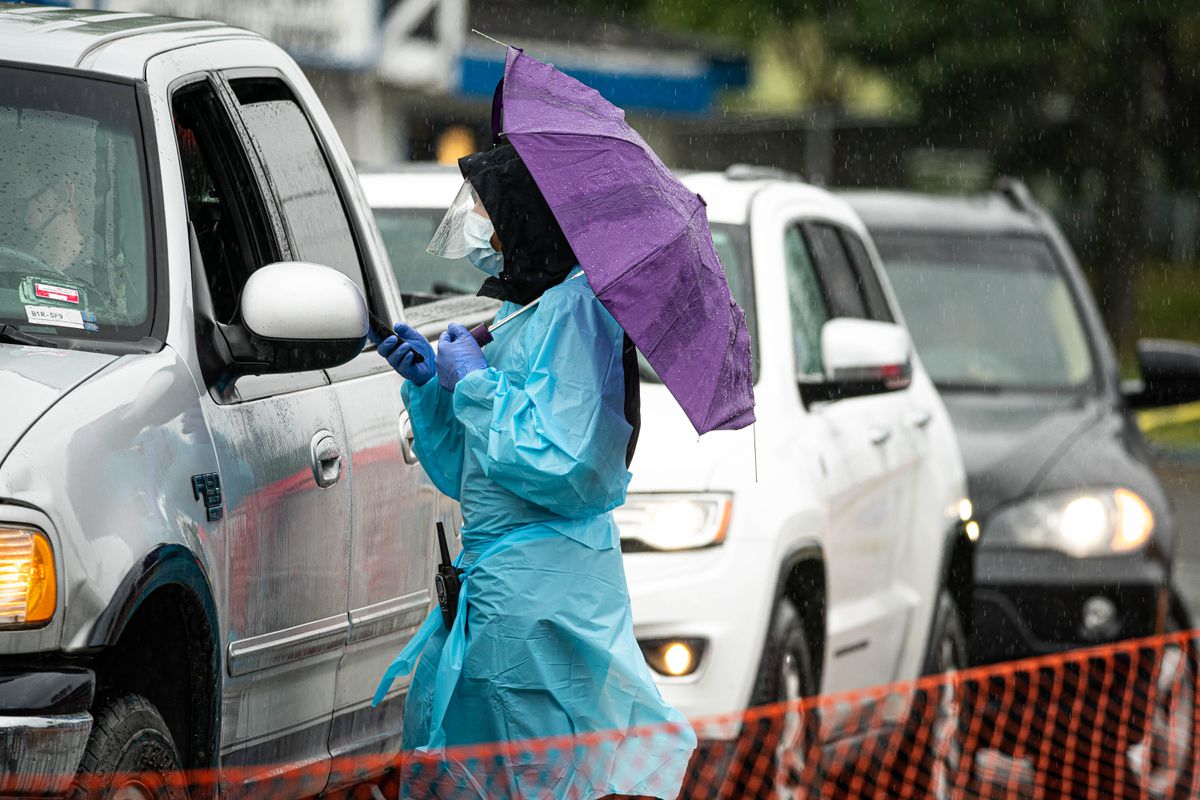 A healthcare worker uses an umbrella as they talk with people waiting in line at the Lake Otis Blvd COVID-19 testing site on Wednesday, July 8, 2020. The current weather forecast calls for rain through the weekend. (Loren Holmes / ADN)

A healthcare worker uses an umbrella as they talk with people waiting in line at the Lake Otis Blvd COVID-19 testing site on Wednesday, July 8, 2020. The current weather forecast calls for rain through the weekend. (Loren Holmes / ADN)

A stretch of rainy weather in Southcentral Alaska kicked off Wednesday as Anchorage saw its heaviest rainfall of 2020 so far.

The region is expected to see continued showers through the weekend.

By noon Wednesday, just over a half-inch of rain had been measured at the National Weather Service office near Ted Stevens Anchorage International Airport, said meteorologist Sam Albanese. Showers were expected to hit the Kenai Peninsula and Mat-Su throughout the day, but Albanese said Anchorage was expected to see the brunt of the storm system.

By about 4 p.m., 0.59 inches of rain had fallen, breaking a daily record for July 8 rainfall that was set at 0.55 inches in 1967, the National Weather Service in Anchorage said on Twitter. The weather service noted that record-keeping dates back to 1952.

Anchorage is expected to see up to an inch of rain Wednesday, but the weather service said some areas along Turnagain Arm could see slightly more. The excess rain will bring the yearly precipitation total up to the average level, Albanese said.

Wednesday is expected to be the rainiest day this week, but Albanese said clouds and showers will persist throughout the weekend in most of Southcentral Alaska. There’s low risk for flooding, he said, but a chance for thunderstorms Thursday afternoon from Talkeetna to the Kenai Peninsula.

Good morning Southcentral! Light to moderate rain is beginning to overspread the area this morning. Rain will continue to fill in across Anchorage and the northern Kenai Peninsula as the morning progresses. See Special Weather Statement https://t.co/VRSqwRFYNA. #AKwx pic.twitter.com/7Qh9FfwhUM

The rainy weather was brought into the region by merging low-pressure systems coming from the Kenai Peninsula and northern Gulf of Alaska to form a band right over Anchorage. It’s unusual for Anchorage to be the area with the most rainfall, Albanese said.

High temperatures are expected to be in the high 60s and low 70s throughout the weekend in the Anchorage Bowl and Mat-Su. Temperatures are predicted to be slightly lower on the Kenai Peninsula, with highs in the low to mid-60s.