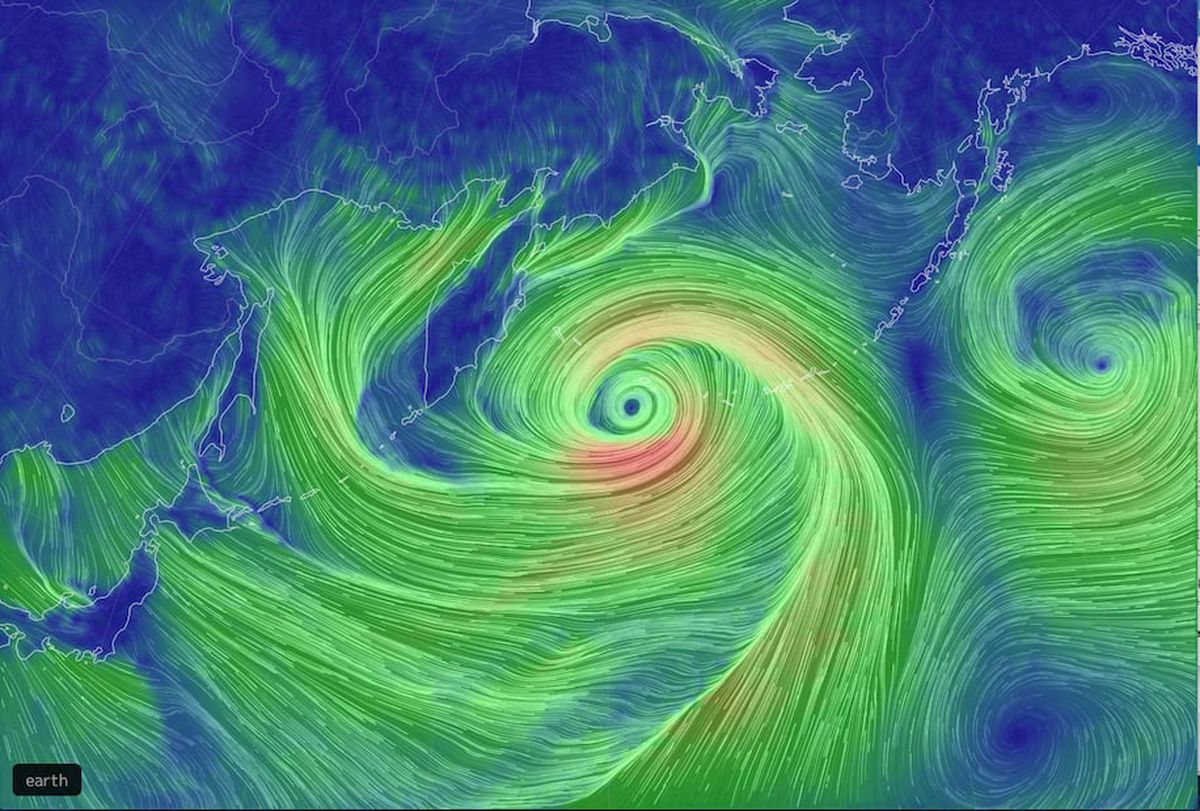 A powerhouse storm explosively intensifying in the northern Pacific could rank as the strongest nontropical cyclone observed in that ocean basin.

The storm’s pressure has already dropped to 921 millibars on New Year’s Eve, which is even lower than extreme cyclones that formed in the same vicinity in 2014 and 2015. It now qualifies as the strongest storm on record to hit Alaska, according to Rick Thoman, a climate scientist at the University of Alaska at Fairbanks.

The NWS Ocean Prediction Center surface analysis has a 921mb (27.20") low effectively on top of Attu, the westernmost Aleutian Island. That makes this the deepest cyclone near Alaska (evidently) since at least 1950. #akwx #BigStorm @Climatologist49 @DRmetwatch @capitalweather pic.twitter.com/8uGQshtOcT

The lower the pressure, generally, the stronger the storm. The two northern Pacific cyclones that set records in 2014 and 2015 saw their pressures level off at around 924 millibars, which means this storm has eclipsed their intensities.

On Thursday morning, the National Weather Service’s Ocean Prediction Center confirmed that the storm is already generating 110 mph winds. On satellite imagery, the storm appears as a giant comma-shaped swirl of clouds, a textbook appearance for a strong nontropical weather system.

At 7 a.m. Wednesday, the European model had analyzed the storm’s pressure at 972 millibars. It predicted the pressure will tumble to 921 millibars just 24 hours later, a 51-millibar drop. This plunge in pressure is double the criteria for “bombogenesis,” in which a storm’s pressure drops 24 millibars in 24 hours and earns the “bomb cyclone” moniker.

The Weather Service’s Ocean Prediction Center, which analyzed the storm at 921 mb, stated it ranks as “one of the strongest storms to ever impact the North Pacific.” The strongest wind gust recorded at Shemya Island in Alaska, located about 1,450 miles southwest of Anchorage, was 83 mph, with high winds and pounding waves battering the western Aleutian Island chain.

This 2020 Pacific bomb cyclone and its ultralow pressure represent an amazing contrast from an exceptional high-pressure zone over Mongolia, which may have set a world record on Tuesday.

At 7 a.m. local time on Tuesday, the mean sea-level pressure at Tsetsen-Uul, Mongolia, rose to 1,094.3 millibars, about 174 millibars higher than the projected pressure in the Pacific cyclone.

East Asia sits in the transition zone between these two extreme pressure centers, and the resulting northerly winds funneling over the Sea of Japan are predicted to cause a massive “sea effect” snowstorm for the Japanese Alps downwind.

Multiple feet of snow are forecast for the high terrain on Honshu through Saturday morning. This same region is just recovering from up to seven feet of snow earlier this month.

Meanwhile, the Pacific storm, in addition to unleashing winds topping 100 mph, is predicted to generate waves over 45 feet over the open waters.

Here is the latest imagery of the #hurricaneforce low in the Pacific nearing the Bering Sea. Winds to 95 kts and wave heights over 50 ft are expected! pic.twitter.com/0lQs9l6Yl4

Such storms generally go unnoticed except for meteorologists and those with maritime interests such as shipping, military and fishing. They are common in winter, although this particular storm is likely to reach the upper echelon of those ever observed in terms of its intensity.

While their pressures are extremely low, they do not fall as low hurricanes and typhoons, which have been known to drop below 900 millibars.

“Unlike hurricanes, these large and powerful storms go unnamed,” Capital Weather Gang’s severe-weather expert Jeff Halverson wrote in describing these storms in 2015. “And unlike hurricanes, they derive their energy from an entirely different process. While hurricanes extract heat from the ocean, maritime cyclones create energy by drawing together warm and cold air masses. When the warm air rises and cold air sinks, the kinetic energy of swirling wind is generated.”

Halverson continued: “The juxtaposition of warm and cold air is also what powers the polar jet stream - and indeed, maritime cyclones and the jet stream are inextricably linked - the one feeding back upon, and enhancing, the other.”

Indeed, the European model forecasts the jet stream transiting the Pacific to reach astonishing speeds of 230 mph (200 knots) at an altitude of 30,000 feet Thursday into Friday.

This rip-roaring jet stream is likely to carry weather disturbances into the Pacific Northwest and even California over the next week.

The National Weather Service is predicting four to eight inches of rain from the coast of Northern California into Washington state over the next seven days. In the high elevations, snowfall will be extreme, measured in feet.

With the jet stream bombarding the West Coast and drawing in Pacific air, the eastern United States is expected to be generally mild next week as the flow of Arctic air into the Lower 48 is cut off.