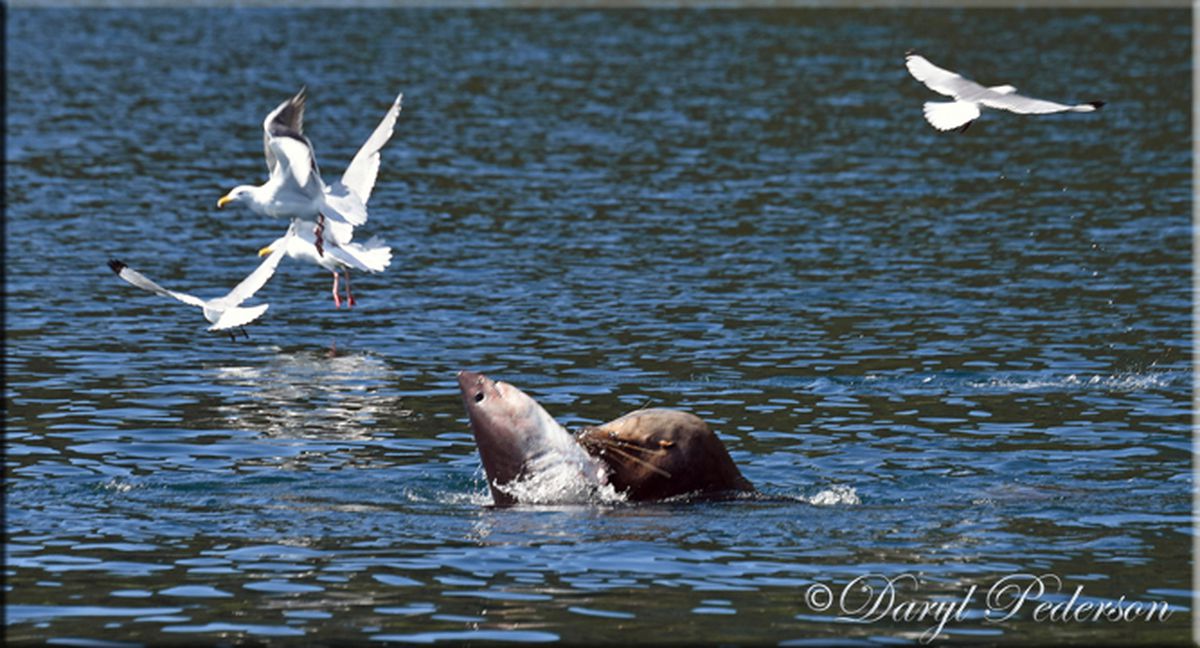 A sea lion catches a salmon shark off the coast of Esther Island in Prince William Sound on Wednesday, June 1, 2016. (Daryl Pederson)

A sea lion catches a salmon shark off the coast of Esther Island in Prince William Sound on Wednesday, June 1, 2016. (Daryl Pederson)

Professional photographer Daryl Pederson, commercial gillnetters, sea lions and others converged off the coast of Esther Island in Prince William Sound on Wednesday, all in search of the chum salmon run. Pederson, who spends a lot of time taking pictures in the Sound, said that some action in the water caught his eye, so he began to motor toward it, photographing as he approached. He spotted a sea lion and something else: "I thought it was a big halibut that the sea lion had caught." Soon he realized that the "big halibut" was actually a salmon shark.

"I only saw what was going on from the surface, obviously, so nothing below 5 feet was distinguishable," he said. "There was lots of blood as well, so it was a fresh kill." As Pederson watched, the sea lion ripped into the shark and ate parts of it.

Salmon sharks are common in Prince William Sound, according to Scott Meyer of the state Department of Fish and Game. They can reach lengths of 8 feet and weigh up to 450 pounds, although the average length and weight are more like 7.5 feet and 315 pounds, Meyer said. Meyer and and Ken Goldman, an ADF&G shark specialist, said they'd never heard of a sea lion killing and eating a salmon shark and suggested something else may have killed the shark first.