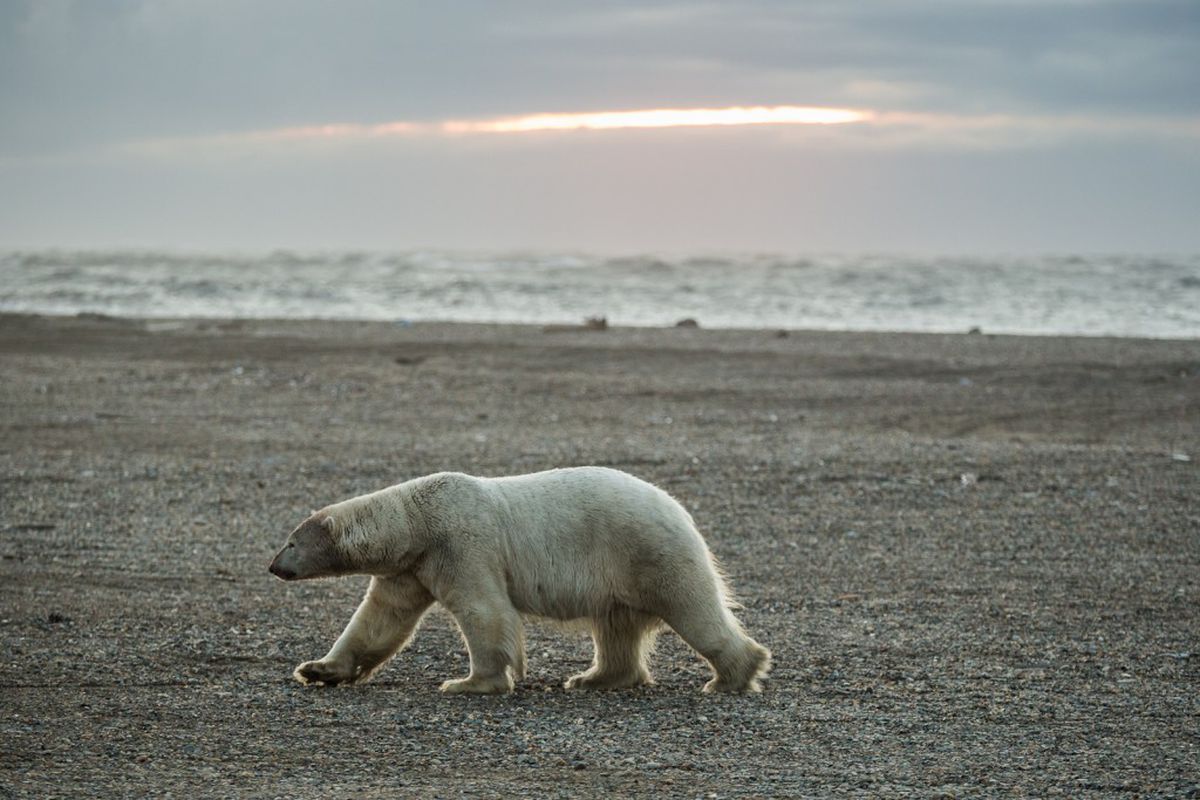 A polar bear walks along the beach in Kaktovik at sunset on Sept. 7, 2012.

A polar bear walks along the beach in Kaktovik at sunset on Sept. 7, 2012.

The hype about polar bears as ferocious man-eating beasts goes way back in history.

One of the earliest recorded fatal polar bear attack describes a gruesome scene in which a skinny bear approached a group of mariners in 1595 "and caught one of them fast by the necke," biting the man's head. The bear kept up the attack, according to the account by Garrit de Veer, a member of Arctic explorer Willem Barents' crew. It "fiercely and cruelly ran at them, and gat another … which she tare in peeces."

But that "bloodthirsty" reputation is undeserved, said James Wilder, a wildlife biologist who has helped study all recorded polar bear attacks on people and who dug up de Veer's centuries-old account.

"The reality is polar bears are creatures of the sea ice and they prefer to spend their time there, given the choice. They would rather not interact with us," Wilder said in a presentation at the 24th Bear Research and Management Conference, held this week in Anchorage.

The preference for sea ice has, historically, kept polar bears and people apart and prevented conflicts, he said.

Unfortunately for polar bears — and for people living along the Arctic coast — sea ice has become scarce in summer and fall. That is making it more difficult for polar bears to hunt for seals, their main prey, from floating ice, so more hungry bears are on shore looking for food. Continued deterioration of seasonal sea ice, which may bring about a largely ice-free Arctic Ocean as early as 2020, bodes ill for polar bear-human safety, said Wilder, formerly with the U.S. Fish and Wildlife Service in Anchorage and now with the U.S. Forest Service in Wyoming.

In anticipation of the changes, the five-nation polar bear "range states" — the United States, Canada, Russia, Norway and Greenland-Denmark — in 2009 formed a Human-Polar Bear Conflict Working Group under the auspices of the Switzerland-based International Union for Conservation of Nature. Wilder is a participant in the conflict working group, which is gathering data, analyzing it and working to develop recommendations to improve safety.

"The point is that if polar bears were really the man-eating beasts they have been made out to be, we'd have a lot more mayhem to report here today," he said.

But now conditions for polar bears have changed, and their interactions with people will likely change as well.

Lack of food and low sea ice is correlated with polar bear attacks on people, the working group has found. Most attacking polar bears have been in poorer-than-average body condition, and 64 percent have occurred in July, August and September, a time of low seasonal ice, Wilder said.

One key finding of the working group: 27 percent of polar bear attacks have occurred in towns, a stark contrast with the situation for black and brown bears, which almost never attack people in towns, he said.

"I think this situation is only going to get worse as sea ice conditions continue to deteriorate and more bears are forced ashore in poor condition," Wilder said.

Other information presented at the conference documented ways that life is getting harder for polar bears.

As sea ice becomes thinner and more fragmented, it is drifting more and in the opposite direction of where polar bears usually walk, forcing them to spend more energy to move where they need to go, according to one research project discussed at the conference.

To make up the extra calories they are burning as they move on the more mobile ice, polar bears need to eat an average of four more seals a year, said George Durner of the U.S. Geological Survey. That conclusion is based on analysis of sea-ice data, largely from the National Snow and Ice Data Center in Colorado, and polar bear movements tracked by years of radio-collar monitoring and information about polar bears' metabolism.

That is probably an underestimate, as metabolism rates are based on treadmill information and the analysis does not account for the extra work needed to scale bumpy ice surfaces or extra calories needed to swim, Durner said.

The extra work caused by moving ice "is one more stressor" and yet more concern about "how climate change is affecting polar bears," he said.

In Canada's Southern Hudson Bay, polar bears are much smaller than they were in the 1980s, reported Martyn Obbard, a research scientist for the Ontario Ministry of Natural Resources and an adjunct professor at Trent University in Ontario.

Body mass for adult males is 9.7 percent lower and 23 percent lower for adult females, he said. The biggest changes are among cubs, which have had a 37 percent decrease in their body mass over the period. That is "another red flag that dramatic changes are happening in the system," Obbard said at the conference.

Other research provided an explanation for the differences between the southern Beaufort Sea population, which has struggled, and the healthier Chukchi Sea population. Both populations, which roam off the Arctic Alaska coast, are affected by reduced sea ice and other climate change impacts, but those fall heavier on the Beaufort population.

"So far in the Chukchi, we're not seeing the population effects. And the question is why," said Jasmine Ware of Washington State University in Pullman, Washington.

Geography might provide an answer. The shallow continental shelf, where polar bears are most likely to find seals to eat, covers most of the Chukchi but extends over only a narrow band in the Beaufort. So reductions in summer and fall sea ice are having more dire impacts on Beaufort bears.

From 1990 to 1995, Chukchi bears were spending more than 88 percent of their time over the continental shelf, compared to 38.7 percent for southern Beaufort Sea bears, according to the research presented by Ware. In the 2009-2013 period, Chukchi bears were spending about 71 percent of their time over the shelf, but southern Beaufort Sea bears were down to 15.4 percent, according to the research.