25 ravens were found shot in Fairbanks. A man admitted killing 2 of them. 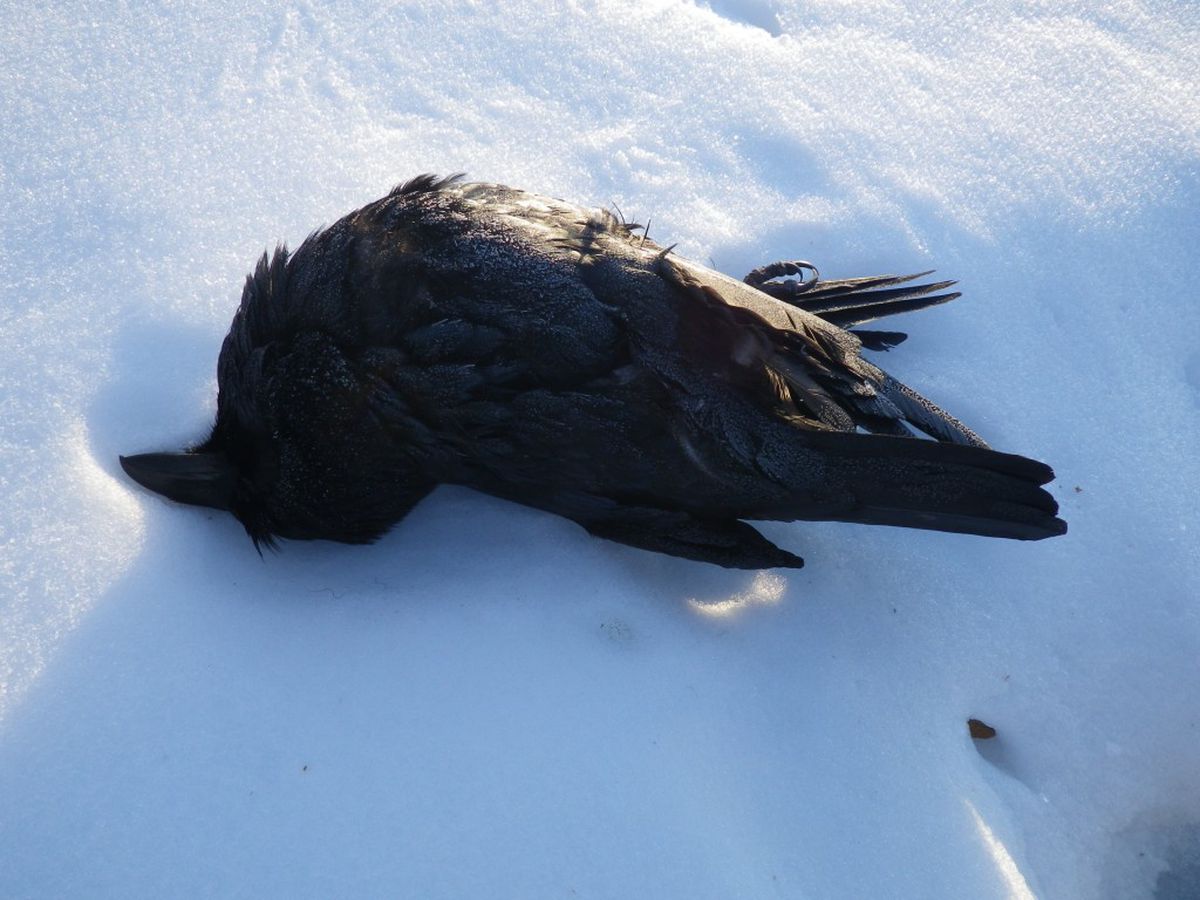 A raven believed to be shot dead on March 29, 2015, lies on snow in Fairbanks. (Courtesy USFWS)

A raven believed to be shot dead on March 29, 2015, lies on snow in Fairbanks. (Courtesy USFWS)

A man will pay a federal fine after pleading guilty to killing two ravens among dozens found shot in a Fairbanks neighborhood last year.

Jerry L. Himebauch, 60, was fined $1,125 for two violations of the federal Migratory Bird Treaty Act, according to U.S. Fish and Wildlife Service Special Agent Ryan Cote. Himebauch had initially been accused of killing one raven, with federal prosecutors adding a second bird from those found.

The case began on Jan. 23, 2015, when a Fairbanks resident reported two dead ravens to wildlife investigators. Cote said that when the ravens were X-rayed, it was discovered that both had been shot.

"That resident found it very strange (and) brought it to our attention," Cote said. "That's when our investigation began and I continued to find ravens being shot."

By late March 2015, according to a probable cause statement against Himebauch, Cote was investigating the unlawful killings of 19 ravens. He said a total of 25 dead ravens were recovered from the Lakeview Terrace area, some reported by residents and others that Cote found in streets, yards and along tree lines.

"As far as charging purposes, they weren't all linked to (Himebauch)," Cote said. "They were all in the vicinity of each other, and believed to have been related to the same subject."

The birds were autopsied at the National Fish and Wildlife Service Forensics Laboratory in Ashland, Oregon. The facility bills itself as "the only lab in the world dedicated to crimes against wildlife."

"All 25 were verified to have been shot," Cote said.

It's possible that some of the birds survived being shot and later died by other means, Cote said. He declined to discuss the caliber of the guns used to shoot the ravens.

At least one of the ravens was found near the 4100 block of Lakeview Drive, where Cote set up surveillance video cameras to record vehicle traffic during a four-day period in late March. Of 121 vehicles passing through the area, only one — a white pickup — stopped in the process; when it did so at about 10 a.m. on March 29, a log noted, "(a) noise appearing to be a gunshot is heard."

A Fish and Wildlife Service photo showed a raven Cote found dead in a nearby yard shortly afterward, lying on its side on the snow.

The truck's license plate was tracked back to Himebauch's employer, with both Himebauch and his boss later saying the truck was issued to Himebauch.

Cote visited Himebauch's Lakeview Drive home in an undercover guise in April 2015 to speak with Himebauch and his wife. When discussions turned to ravens in the area, Himebauch's wife said they had been "weeded out."

"Himebauch pointed toward Lakeview Drive and in the general direction of 4050 Lakeview Drive and stated, 'You can go around that end and you can usually pick off a couple of them a day,' " Cote wrote. "(He) agreed the population of ravens should be thinned and said 'You eventually just get so damn many of them they're just like the seagulls, god there's a lot of them bastards.' "

Himebauch said nothing during that conversation about why he killed the ravens, Cote said.

"There was a reference to gulls, but gulls here are a seasonal thing," Cote said. "Gulls are only here during the summertime — ravens are here throughout the year."

During a December 2015 interview, Himebauch told investigators he carried a .22 rifle in the pickup. Cote said prosecutors ultimately linked two of the ravens' deaths to Himebauch, for which he was fined in the plea agreement.

Although Alaska investigators have seen killings of up to 10 birds, Cote said most of them tend to be single incidents in which a group of animals are killed at one site. The large number of birds killed in 2015 led investigators to discuss the case as if a serial killer were on the loose.

"In this case they were recurring, and I was finding them within a day of them being killed." Cote said. "It gave the feel of 'The subject's in the community, and when will the next one turn up?' "

Himebauch ended up paying $550 each for the two raven deaths in the case against him, plus a $25 processing fee. Cote said Himebauch had moved from Lakeview Drive, but didn't have word Wednesday on whether his plea agreement included any promise not to kill other ravens.