Alaska moose locked antlers in a fight, then froze together in a slough 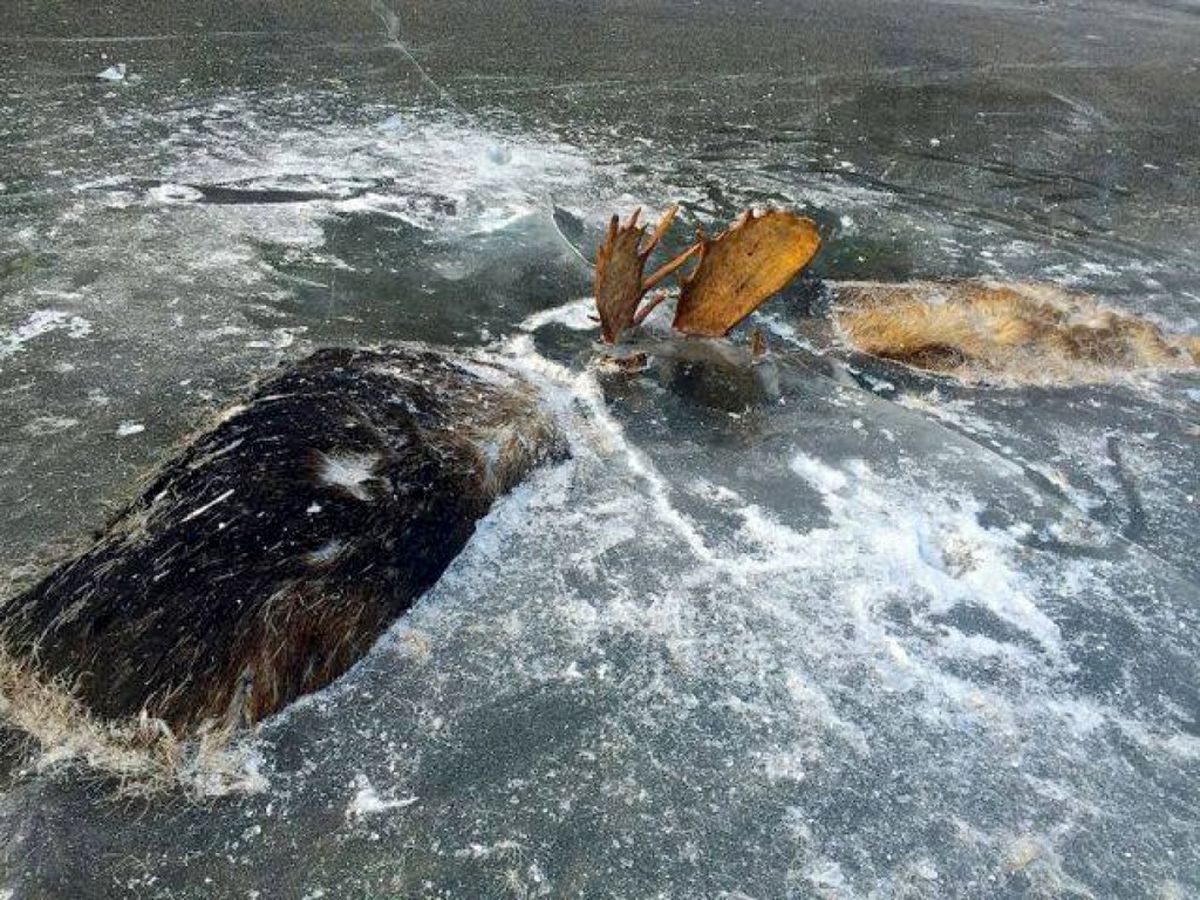 These two moose froze to death in what would be their final battle. (Jeff Erickson via The Washington Post)

These two moose froze to death in what would be their final battle. (Jeff Erickson via The Washington Post)

The sight of hulking moose isn't uncommon around Unalakleet. But Brad Webster had never seen moose like this before.

Webster, a social studies and science teacher, was showing a friend around the grounds of the Bible camp he helps maintain. It was early November, cold enough that the slough at the site was covered in a sheet of ice thick enough to walk on and clear enough to see through.

[Watch 2 moose brawl in the Chugach Mountains near Anchorage]

The men rounded a bend, and there, Webster said, they saw it: a large set of antlers and a hairy brown hump protruding from the ice. They got closer, and saw another hump — and another set of antlers, entangled with the first set.

The two bull moose were lying on their sides, apparently locked in a fight to the death, and now perfectly preserved in 8 inches of ice.

"We were both kind of in awe," Webster, 33, said in an interview on Wednesday. "I've heard of other animals this had happened to, but I've never seen anything like this."

Neither have most people. Another friend of Webster's, Jeff Erickson, posted photos of the moose on Facebook last week, and the remarkable sight promptly shot around the globe (sparking, predictably, metaphorical jokes about politics). Erickson said even elders in the Western Alaska village on the Norton Sound coast had never seen such a thing.

Kris Hundertmark, chair of the biology and wildlife department at the University of Alaska Fairbanks, said in an email that the antlers of male moose competing for females can become so entangled the animals cannot dislodge themselves from their opponents.

"These two fellows were unfortunate in that they probably fell into the water while locked together and drowned," Hundertmark said. "Then again, that is a much quicker way to go than by getting locked together in some forest and slowly starving to death."

[For two Anchorage women, a walk in Kincaid Park turned into a terrifying moose attack]

Last weekend, Webster, Erickson and a few other friends — including a taxidermist — went back to the site to retrieve the two moose heads, which Webster said he wanted to mount and use as unique wall hangings with a heck of a backstory at the Bible camp.

It took a few hours, a chainsaw and an ice-pick to get through the ice, under which was about 2 feet of water, he said. They left the carcasses, which he said some people in town are talking about using to feed sled dog teams.

When they examined the heads, it looked like one moose might have pierced the other's skull, Webster said, leading him to believe one might have died midbattle, then pulled the other down into the water with him.

"After that one's dead, it's kind of like you won the battle but you lose the war, because you've got a whole other moose attached to your head right now," he said.

Erickson, 57, said in an email the sight of the drowned moose will stay with him.

"Life in Northwest Alaska can have a stark reality and brutal consequences," he wrote. But, he added: "I was just happy to be part of the recovery. … The view of the antlers protruding from the ice with the soft layer of snow on the carcasses not encased in the ice was such a stark and eerily beautiful scene."